Cry for Yourself, Argentina

Argentina seemed poised to have it all once, equipped with vast natural resources and good potential for growth. Now, however, the economy is struggling, the population is unsatisfied, and politics have been marred by corruption scandals. In the middle of these scandals is the woman who was at the helm for eight years: Cristina Fernandez de Kirchner, known also as CFK and, to most Latin Americans, simply as Cristina.

Currently, she is a senator for the Buenos Aires province. However, her political journey began in the 1980s, alongside her husband, Nestor Kirchner. He was elected president in 2003, she succeeded him in 2007 and was re-elected in 2011. Though she has been controversial, she is also a left-leaning populist, which has made her popular among the lower-income sectors of Argentina who have felt the effects of current president Mauricio Macri’s austerity measures for the past four years.

Cristina Fernandez at her Inauguration in 2011.
Author: Casa Rosada
Found via Wikimedia Commons

At the moment, Fernandez is facing trials for no less than 12 cases, based on corruption allegations against her.  She has been accused of accepting bribes from companies in exchange for monetary benefits from public works contracts. At the time, she has gone on her first trial, for giving preference to her friend, Lazaro Baez, for road construction contracts in Santa Cruz, the southern province of Argentina that she comes from. During the Kirchners’ terms in office (from 2003 to 2015), Baez was given virtually all the contracts for public works in Santa Cruz. Many of the works were overpaid for and left unfinished, leaving Baez and his company in possession of public funds. Although Baez has been imprisoned, Fernandez has managed to avoid preventative imprisonment due to parliamentary immunity (members of the legislature are granted partial immunity from prosecution).

Fernandez has called the allegations “a smokescreen” and her lawyers say they are unfounded. She has also likened them to a form of political persecution from Macri’s government. However, it is far from clear that she is innocent, and it seems less likely every day. Members of her administration are also under investigation and arrest. Some of them have been accused of trying to frame one of Fernandez’s prosecutors for blackmail: Julio De Vido (a minister) and Roberto Baratta, his right-hand man; Eduardo Valdes (an ambassador); Juan Pablo Schiavi (the former Secretary for Transport); and Carlos Zelkovicz (a government employee). The investigations were opened in the first place because Baratta’s chauffeur was found to be keeping detailed records in notebooks of the contents of bags of money that he was transporting for Baratta, which are suspected to have been full of the bribe money for the Kirchner administration. Moreover, recordings of Baez have been found that seem to point to him as a figurehead for the Kirchners: he is recorded as saying that “everything I have belongs to one person above me.” This person is believed to be Fernandez’s late husband, Nestor.

Fortunately for her–and worryingly for Argentina’s political future–Argentinians are now largely primarily concerned with the stagnation of the economy and insecurity than with corruption in politics: it seems that many are willing to brush aside corruption allegations if a candidate seems promising enough regarding the issues with the economy and security. The Fernandez-Fernandez team, who have promised to boost economic growth, therefore seems posed to be a threat to Macri’s re-election. Even though their brand of populism is likely to do more harm than good and in spite of Cristina’s terms in office being marked by soaring levels of inflation (almost 30%) and economic problems, Macri’s failure to deliver on his promise of economic recovery is playing against him. Currently, the F-F team is polling at 35% to Macri’s 31% for the first round of elections. 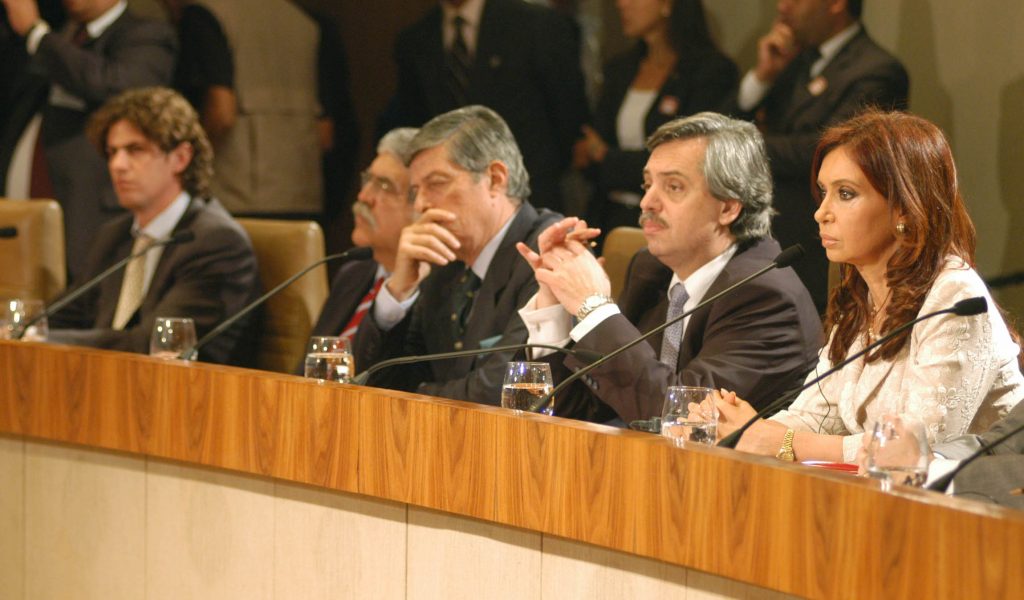 Cristina Fernandez and Alberto Fernandez (on her immediate left) on a state visit to Brazil in 2007.
Author: Presidency of the Nation of Argentina.
Found via Wikimedia Commons

Though Cristina’s appeal to the lower-income population seems standard for a populist at first, it becomes incredibly puzzling once examined. She has long been known, both among the civilian population and among diplomats, for having a taste for the finer things in life, to put it mildly. When she left the Casa Rosada (the Pink House, the Argentinian presidential residency) in 2015, she did so with over €6 million (about 8 times more wealth than she and her husband had in 2003) and a large collection of the world’s most expensive designer accessories, Gucci shoes and Hermès crocodile-skin, diamond-studded Birkin bags amongst them (valued at over $300,000). While a taste for the luxurious could be understandable, the fact remains that the source of her wealth is questionable to say the least. Although she attributes it to her career success as a lawyer and politician, this is far from proven. When her three homes (one flat and two mansions) were searched as part of her trial, the artwork in them alone was valued at over $4 million, and it was found alongside similarly expensive objects: Chinese vases, limited-edition pens, and various accessories and decorations made of gold and silver. The corruption allegations against her indicate that there is at least a strong possibility that all of these possessions were paid for with bribe money that then ensured that taxpayer money was wasted, yet the very people who depended on the effective use of that money are those who most consistently support her.

Those who are undecided will make the difference this October. It remains to be seen whether they will keep the seriousness of the allegations against Cristina Fernandez in mind.