Cultural genocide–the deliberate destruction of ethnic groups’ culture–is still going strong in the modern world and we’re not paying nearly enough attention to the fact that it is. In Xinjiang, China, Muslims are being detained and sent to “re-education centres” (read: detention camps surrounded by razor wire and watch towers) where they are separated from their families and tortured into allegiance to the Chinese government.

Document leaks published in the New York Times in late 2019 have exposed the extension of the Chinese government’s crackdown on Uighur Muslims. Beijing calls the camps “training schools” and justifies them as a defence mechanism against Islamic extremism. However, the documents leaked and the footage that has come out of the camps in the past two years say otherwise. Even more chilling is the fact that the documents indicate that the government has no intention to limit Muslim repression in China to Xinjiang. 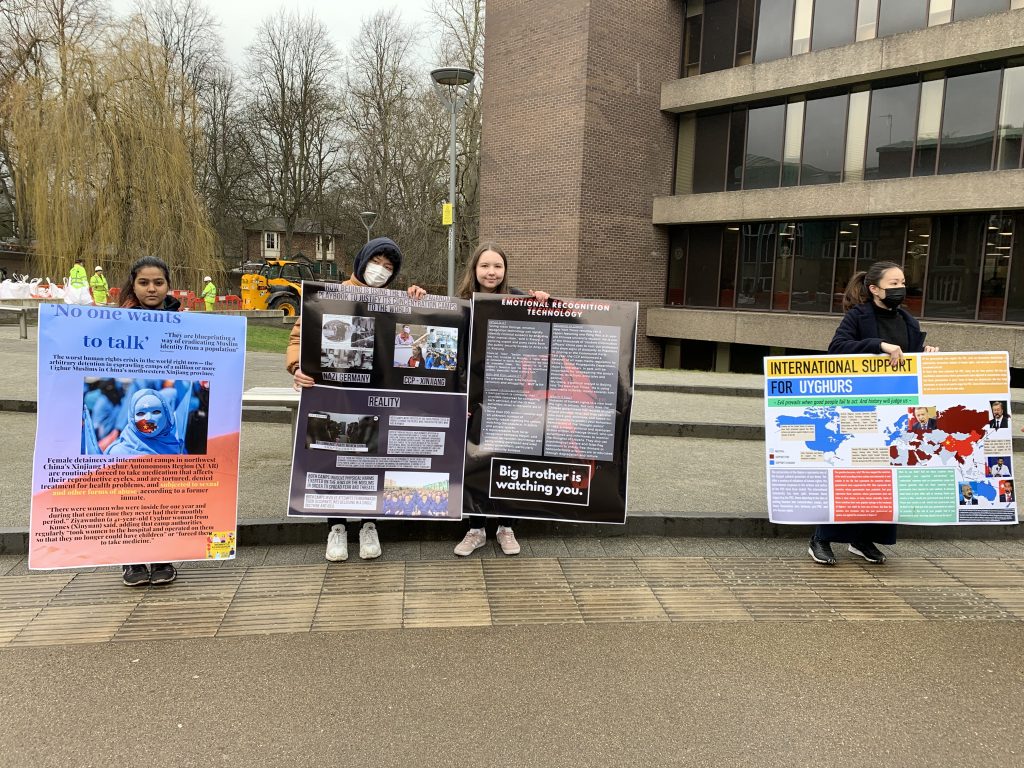 The protest in Durham

On Friday morning (February 28th, 2020), I was able to speak with a group of students who stood outside the Bill Bryson library, holding charts detailing the horrific treatment that Uighur Muslims have been receiving in China.

Q: Are you here with a society or are you a self-organised group?

A: We started as a self-organised group of Durham students, inspired by the One World movement (a London-based group that has held rallies to draw attention to this). However, other societies heard we were planning this and have collaborated with today’s protest: Amnesty International, Durham People of Colour Society, Islamic Society, Women’s Society and HeForShe Durham.

Q: How did you find out about the situation in Xinjiang?

A: We all found out differently–some of us grew up in China and have family in China who said that people in Xinjiang were disappearing mysteriously, some of us saw the demonstrations in Hong Kong and read about it on the news, and some of us found out when the government admitted they were sending Uighurs to these “re-education centres.”

Q: What are your goals for this protest?

A: To raise awareness and start a conversation. It’s really important to speak up in places where there’s no chance for retribution because Uighurs and their relatives face repercussions if they speak out for themselves–their families are under comprehensive surveillance. All this means it’s really difficult to effect change on the international stage–this is why it’s so important to start conversations from intellectual environments like universities. Potentially, maybe we could get people to boycott certain products that have been made with forced labour in Xinjiang, such as cotton.

Q: Have any of you got any personal links to people living in Xinjiang or to the Uighur community?

A: We don’t, but that’s what allows us to speak out, that we don’t have family in Xinjiang that could be threatened with the camps. However, we’re trying to protect our identities because some of us may have to go through the Chinese border soon.

After talking to about the protest itself, we moved on to the international response. For almost two years, the camps have been featured on the news every couple of months, many will have probably heard of them at least once–but stronger action isn’t being taken.

Q: Aside from some sanction bills in the US and verbal condemnation, the international response to the camps has not been very strong. Why do you think that is and how would you like to see this change?

A: The response has been lacking, unfortunately taking a harder stance effectively means taking China on and many countries aren’t willing to do that because they have important business ties to China. Chinese investment in developing countries also makes them more reluctant to speak out because they fear the consequences for their trade prospects, even Islamic countries who are likely to be discontented with the treatment of Uighurs. It’s difficult to know what kind of action would be feasible, given China’s leverage in the international arena.

We’d also like to see more universal awareness of the influence of the Chinese government on the narrative surrounding these camps and the contribution of American researchers to the technologies used for surveillance in Xinjiang. Just exposing that narrative could do a lot.

The UK’s response and common misconceptions

It’s worth noting that when 23 countries issued condemnation of China’s actions, China and 37 other nations issued a joint statement defending the crackdown. We then talked about the UK’s response specifically. Although the UK was among the 23 countries that issued the condemnation, the government has recently come under criticism for allowing Hikvision, a surveillance equipment provider active in Xinjiang, to attend a trade fair hosted by the Home Office.

Q: The UK government has recently been criticised for its actions towards Chinese surveillance companies. What action should they take instead?

A: We’re not sure, ideally there would be a harder stance against China and awareness of what using Chinese surveillance technology implies, maybe with some public consultation to evaluate this. We’ve been urging for economic sanctions against China, to see the UK government stand up and say that that the Chinese government’s actions are wrong and use their trade to make China reconsider, especially with trade relations changing because of Brexit.

Q: In your opinion, what are the biggest misconceptions that people have about this?

A: Firstly, that it’s not bad enough to be called a “concentration camp” and that this is recent–the atrocities that are officially reported are likely to be a fraction of how horrific this really is. Secondly, that this is necessary to defend China from Islamic extremism or that that’s the main motivation behind this. Violence in Xinjiang has come from both sides of the conflict and hate crimes against Muslims in the region are rampant. China portrays this as fighting against terrorism, but that can’t justify cultural genocide. Finally, that we should demonise Chinese people in general over this. Most people in China don’t know much about what’s happening to Uighurs because of the government’s grip on the media. We should see this as an opportunity to educate Chinese expats who might not have heard about this when living in China.

Though official estimates say there about 1 million people in the camps, it could be up to 3.5 million. Repression of Uighurs in Xinjiang started in the 1990s, with tensions growing around the time of the Beijing Olympics in 2008. In 2015, Xi Jinping gave the order to show “absolutely no mercy.” This is not unprecedented violence, but the world has been turning a blind eye. It’s time to say enough is enough.

Thank you to the organisers of the protest for speaking to me and allowing me to photograph them.