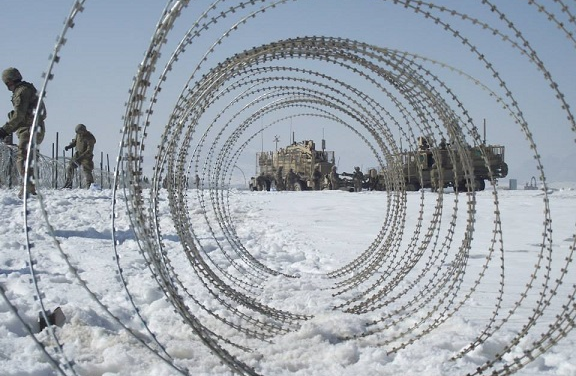 This article is based on interviews carried out by the author

Inches of snow caused a wet-pale brown emergence from the mud, giving the air an earthy scent. The crisp wind finally gave way to warmer weather. A sunny day, yet this gentle-heat brought no relief for the soldiers. The deep feeling of doom was inescapable. Until this day, no one had been shot.

1st Lt. Matthew Tetreau, 24, and 1st Lt. Caspar Yi, 25, were platoon leaders of the 54th Engineer Battalion from Bamberg, Germany. They served in Ghazni, Afghanistan, from August 2012 to February 2013. They were deployed with the 42nd Clearance Company, searching for improvised explosive devices. They often drove down the roads and looked for bombs; when they located them, they destroyed them — that was their objective.

“We would drive or walk searching for the bombs. It is a little hard to locate the bombs driving,” said Tetreau. The vehicles are safer, but they do not offer full protection either. Walking allowed them to find the bombs more easily. As the thick snow rested on the surface, every single nerve-wracking step was a gamble.

Yi and Tetreau were from a different platoon. As Tetreau explained, by January 12th most of the soldiers of the platoon they joined had already been there for ten months. “They were tired, ready to go back home,” said Tetreau.

They had already fought a total of 60 firefights in the company, but no one had been shot before. Yi recalled the days as continuously testing. The enemy might be waiting right outside of the wire. Constantly being watched, every hour of the day was another concern that forced them to be on their toes at all times.

“It’s like a chess game with the enemy because the enemy always watches you. And if the enemy doesn’t watch you—the civilians are,” said Yi.

January 12th was like any other day in Ghazni, except it was warm. The snow-covered ground turned into mud; the field felt like an ice rink. The officers and their platoons had less than a month before returning home safe-and-sound. “At that point I had not lost anyone,” said Yi.

On the morning of January 12th, Yi and his platoon, along with the Polish soldiers who accompanied them, were on a route clearance mission. They were heading south on Route Ohio, one of the longest, tarmacked roads. They were headed to the ‘hot spot,’ where most of the enemy activity took place.

There were a total of 14 vehicles with Yi, comprised of both American and Polish forces. At approximately 9:30 a.m., they stopped and dismounted. Yi said he was not the only one who had a nagging feeling that something bad was on the horizon; his soldiers felt the same.

Yi and Specialist Mike Allison headed south with three Polish soldiers as their security. They walked about 200 meters in the route when all of a sudden they received gunfire. The fire was coming from two-story buildings, in a general direction in front of them, but it was not directed at them; it was directed at their inside teams.

“I see bullets hit the mud homes next to us, and we tried to run for cover, but because it was so slippery and wet that I had slipped…And I’m thinking, ‘I am going to get shot,’” Yi said. Before he could even feel anything, Yi saw bullets ricocheting right above him and next to him, smacking into the mud like hail.

Everyone was already in the cover. Yi began crawling his way to cover, about five meters away. “And then…at my last gasp, I pretty much jumped… I flew. And when I landed, I’m all muddy so I couldn’t see anything,” he said.

“All of a sudden I see Allison on the ground…he’s flailing his legs and touching his body…because he doesn’t know what is going on. And all of a sudden he says: ‘sir…sir…I think I have gotten shot,’” Yi said.

Yi got up and wiped his glasses from the mud. He gave directions to the Polish soldiers and ran to Allison to check for wounds. The volume of shots increased. Allison screamed in terror.

As Yi began performing first aid, he did not initially see any blood. Allison continued to scream in agony until Yi worried that the soldier might go into shock. Finally, Yi took Allison’s armor off and lifted up his shirt to see a clean bullet hole from his abdomen.

Yi quickly realized that none of the blood was spilling out. He wrapped medical dressing around Allison’s waist. He popped smoke and radioed his platoon sergeant for immediate assistance. While Yi was waiting for help, he laid on top of Allison to keep him calm and to shield him from further enemy attack, assuring him that everything was fine. Allison finally calmed down.

They were seven kilometers from base. The firing had not ceased. They had to get Allison out of there. The company leaders along with the Polish soldiers fought through intense gunfire and difficult surface conditions just to get to Yi and Allison.

“We pick him up, bring him over, and there was a compound, and it had a metal door. One of the Polish guys…kicked this door out. So we are moving back slowly,” Yi said. Eventually, three Polish medics came and helped to keep Allison stabilized.

It was difficult to maneuver through the mud and snow. They slipped and slid and the soldiers’ boots bogged down for the 100 metre trek to the convoy. They had to bring Allison back to the base.

“Our trucks are ready, our guys positioned. And we are so tired; I have never been so exhausted in my life. We finally got Allison out of there,” said Yi. He and his soldiers were on their way back to the base, at last.

Yi recalled it seemed as if they were out there for over an hour and a half, the shots, the anticipation, and the vision of their friend in pain. When they returned to the base, Yi checked the time. Everything had lasted 25 minutes.

Allison was safe; two hours later, Yi and his soldiers went back out. Yi stated: “Our job is not finished until we clear that route. Always place the mission first.”

Upon Yi’s return to Germany in February, Yi was presented with a Bronze Star Medal for Valour in recognition of his leadership and bravery under fire and unselfish acts in which he put his men first.

However, Yi did not feel that he deserved to be singled out. “Everybody did everything to save Allison’s life,” he said.