Chile Protests: A Country “At War”?

Will Guy in Current Affairs World Affairs on 23 October, 2019. 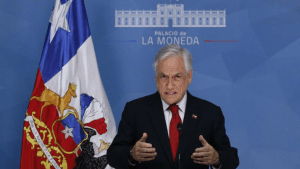 “We are at war,” declared President Sebastián Piñera following three days of violent protests in what was previously considered one of Latin America’s most stable countries.

The last Chilean leader to say those words was General Augusto Pinochet in 1973, following the military coup that installed him as supreme dictator for the next 17 years. During that time, he rounded-up, tortured and executed thousands of Chileans considered to be socialist sympathisers.

The Museum of Memory and Human Rights now stands proudly in the west of the city as homage to victims of that era, with hope that those times may never again be repeated. Given this historical context, Piñera’s rhetoric is very, very dangerous indeed.

In an inflammatory speech on Sunday, the President vehemently spoke out against the “powerful and implacable enemy” facing his government and the Chilean people:

“[The enemy are] prepared to use limitless violence and criminal acts. Even when their actions may lead to the loss of human life, they remain willing to burn our hospitals, our metro stations, our supermarkets; with the singular aim of causing the greatest amount of damage possible.”

This comes less than two weeks after Piñera professed that Chile was the “oasis” within a desert of turmoil that is the rest of Latin America.

At the time of writing, the whole city waits on tenterhooks during its third consecutive night under curfew. Fully-armed police swarm the streets; military helicopters circle the skies. It certainly feels like the oasis might have finally dried up.

Today, tens of thousands of protestors lined the streets of Santiago, the capital, and many more large-scale demonstrations took place up and down the country. Those not protesting queued for hours in the blazing sun to hoard extra supplies from the handful of supermarkets and pharmacies that opened today. I was amongst those anxiously preparing themselves for a potential lockdown of the city over the coming days.

So far, the worst has not materialised. The demonstrations on Monday, although massive, were largely peaceable. The majority of police and military officers stood back in the face of such numbers and thankfully no more fatalities have been reported, besides the fifteen who lost their lives as a result of fires and ballistic wounds over the weekend.

However, Piñera’s speech is indicative of deeper concern over government actions: one that, if true, could incite violence on a larger scale.

Viewed historically, the President’s rhetoric is nothing new. Since the early days of independence, nation-builders across Latin America have constructed internal ‘others’ in order to sustain national sentiment. Without some form of enemy against which to compare themselves, how else would people know what it means to be Chilean, Colombian, or Costa Rican?

Indeed, the recent clashes between government forces and protestors in Ecuador present almost a mirror-image of current developments in Chile. Following a hike in fuel prices, indigenous communities took to the streets, where violence erupted between the two sides for the following twelve days. The Ecuadorian President, Lenin Moreno, proceeded to denounce those involved in demonstrations as mere “criminals”, failing to recognise the reasons behind their actions.

In accordance with my first article on the protests, this is exactly why we must not fail to situate the Chilean crisis within the wider regional discourse: Chile is much more ‘Latin American’ than its leaders would have us believe – it has the same history and is subject to the same social and political pressures as the rest of the continent.

Therefore, when President Piñera talks of the “battle” to come – against the despicable “crimes” of “delinquents” – he is drawing on a well-established vocabulary for Latin American leaders when faced with internal unrest. 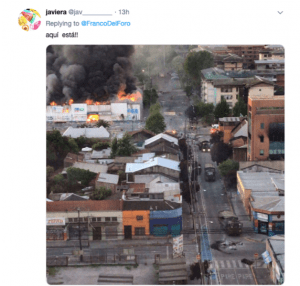 Image posted on social media supposedly showing military vehicles (far right) driving away from a supermarket fire in Concepción – did they start it? Source: Twitter

This leads us to a very important question about the current situation. If it is in Piñera’s interest to create an internal enemy (which it is), then he will also want to make that

enemy seem as evil as possible. And if that’s the case, then it fits that the government would want the damages inflicted to be as serious as possible. That way, the “vandals” can be blamed for destroying the country’s public spaces, shops and transport system: in essence, all the things that made Chile

So – given that wide-reaching destruction of public and private property would suit his objectives – is it out of the question that Piñera might be encouraging that to happen?

Now, I’m not a conspiracy theorist; I can only report on what I’ve seen and heard here in Chile. And there exists a significant number of people here who believe that President Piñera is, at best, condoning criminal activity in and amongst the protests. At worst, his forces may be responsible for causing much of the damage seen across the country (see image). In this way, protestors say he is able to conveniently dismiss their fury at his government’s mismanagement and corruption by vilifying protestors as criminals.

In my eyes, Piñera’s speech does seem to be a deliberate attempt to escalate the situation: a president genuinely vouching for peace would not have uttered those words.

However, since then, the President has back-tracked, foreseeing a “long road to peace ahead”. Perhaps it was the determination today of huge numbers of protestors to keep demonstrations non-violent – primarily in the form of traditional caserolazos (a cacophony of clanging pots and pans) – that forced him to reassess his position. If so, then the protestors may well have taken an important step towards defusing the crisis.

It is perhaps the greatest irony of all that Piñera’s great rival and predecessor, Michelle Bachelet, may be the current president’s best chance of resolving the situation. Bachelet was herself subjected to General Pinochet’s torture programme as a young girl in the 1970s, long before she found her way into Chilean politics. She is now the incumbent UN High Commissioner for Human Rights and her peace-keeping representatives will be watching Chile in readiness.

Just as in Ecuador, they will be looking keenly for an opportunity to establish a proper means of dialogue between the two sides. Only then may real progress be made. 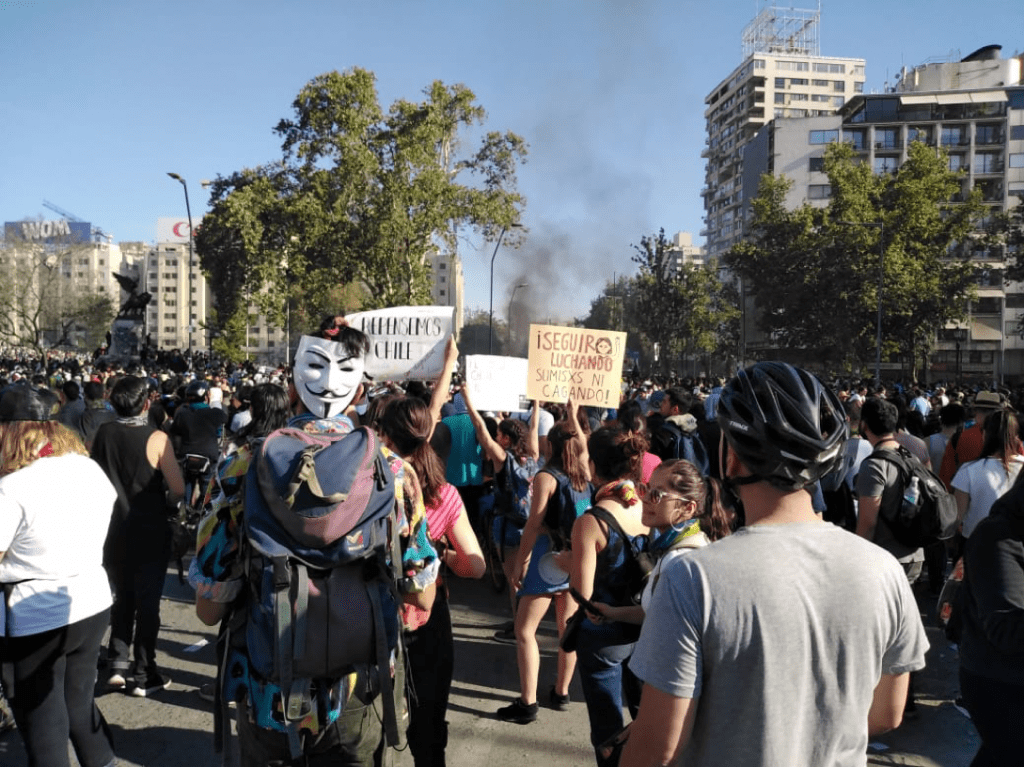 Tens of thousands took to streets across Chile on Monday in peaceful demonstrations. Source: Will Guy