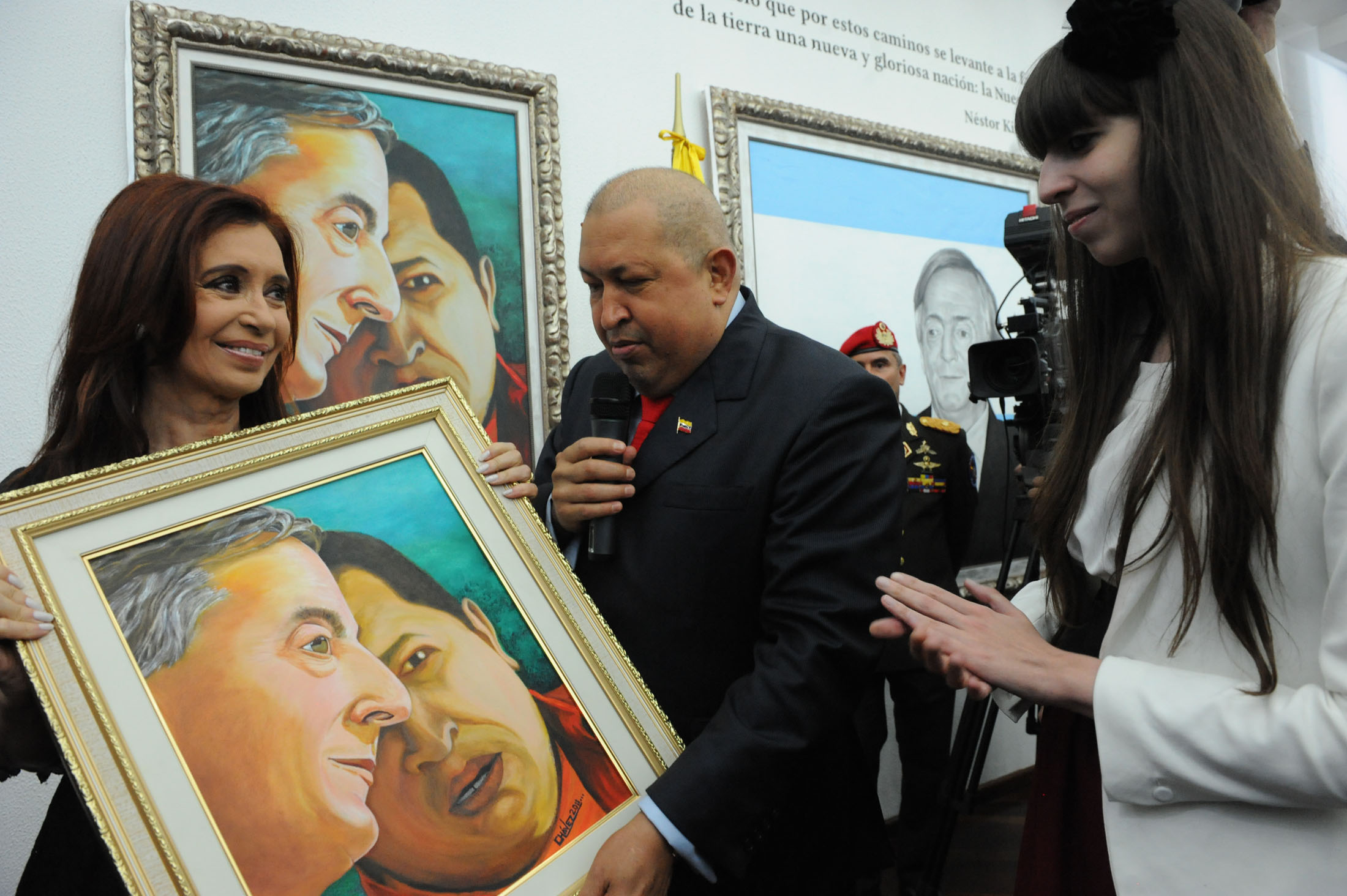 Late Venezuelan socialist leader Hugo Chavez presents Cristina Kirchner with his own work, a painting of himself alongside her late husband and previous President, Néstor Kirchner.

On November 22nd, opposition candidate Mauricio Macri won the Argentinian Presidency in a narrow victory over Daniel Scioli, the candidate chosen by incumbent leftist populist Cristina Fernández de Kirchner. It was the first ever run-off vote for the Argentinian Presidency, an indication of the closeness of the competition. The Presidency shifted into the hands of the centre-right, after 12 years of left-wing leadership under Kirchner and her late husband, Néstor Kirchner, before her. A faltering economy suffering from stagflation (with growth down to 0.5% in the second quarter of 2015, and annual inflation at around 25%) pushed voters towards a neoliberal reformist.

Right-wing commentary has portrayed it as the inevitable collapse of unsustainable populism, and the return of realism. For example, The Economist suggested that Scioli would himself have had to reverse many of the policies associated with Kirchnerismo out of sheer economic necessity. Branding Kirchnerismo an “autarkic brand of populism”, they argue that Macri will push through “saner economic policies”, should he gain the support of Congress (which is currently still dominated by pro-Kirchner leftists). These “saner” policies will include creating a more positive climate for private investment (hitherto scared off by price controls and non-compensatory nationalisations), and the lifting of controls on foreign exchange, as well as reaching a deal with creditors with whom Kirchner had “spurned an inevitable deal… raising its eventual costs”. In foreign policy, Macri will apparently pursue a realignment away from Iran and China and towards the USA and Europe, a shift which will likely be increasingly apparent in Macri’s approach to the Maduro government in Venezuela, which will be tested in a parliamentary election on December 6th under the scrutinising eyes of anti-Chavistas worldwide. The Economist’s idea that Macri’s election represents “the ebbing of the pink tide“,* may gain traction if that result is also, as expected, a loss for the incumbent leftist government.

Apart from Kirchner’s alleged use of short-term fixes to prop up living standards, there were ominous glimpses of genuine corruption, such as the President’s inclination towards interfering with the official statistics agencies to prevent the emergence of accurate figures on inflation and poverty levels. Suspicion was also directed at her own personal wealth. Then there were the highly alarming but as yet unsolved allegations that Kirchner collaborated with Iran to cover up the details of the 1994 bombing of a Buenos Aires Jewish Community Centre. That case culminated in the suspicious death of Alberto Nisman, the main prosecutor involved, the day before he was due to deliver his allegations before parliament. Again, nothing has been proven, but pervasive accusations of cronyism have made it harder for observers to simply dismiss even these more extreme tales of corruption.

With this apparent economic mismanagement and the constant hint of corruption and cronyism, it is worth asking why the result was so close after all (it is also worth remembering that Kirchner’s allies continue to dominate Congress). Is there some nuance to this story? Indeed, although the economy is in a poor state now as it transfers from a Left-wing Presidency to a Right-wing one, it remains in far better shape than it was when the Leftist Kirchner’s first took power from the Right, in 2003. The Right’s market-driven policies, such as deregulation, culminated in a crippling financial collapse, seeing growth fall to a record -5.7% in the fourth quarter of 2001. Upon coming to power, the Kirchners took advantage of high commodity prices to carry out “expenditure-driven development”, building an extensive welfare state and engaging in large public investments, with Cristina later shifting further Left and undertaking nationalisations. This commodity-funded strategy functioned reasonably well until commodity prices dropped in 2011. Although Kirchner was left apparently unable to come up with much in the way of an alternative when this model started to falter, the social programmes, the redistributive welfare, and the egalitarian ideals unsurprisingly remain widely popular. This must be seen within the context of a general phenomenon of leftist, redistributive nationalist governments across Latin America, riding on an ethos of egalitarianism and resistance to the “Washington Consensus” of neoliberal policies and inevitable inequality, which is characterised, in many ways correctly, as US imperialism aimed at a northwards wealth transfer from the Global South (including Latin America).

Furthermore, the Kirchners inherited trouble from international creditors, after the previous, po-market government defaulted on 93billion debt in late 2001 (the largest sovereign debt default in history), and since then “vulture funds” (investors who had an interest in triggering an Argentine default, due to their ownership of Credit Default Swaps against Argentine bonds, and who speculatively acquired Argentinian bonds at their lowest price with the intention of pushing for the highest repayments from the government) have continually tried to exploit the country. President Kirchner was able to harness much nationalist indignation with statements about meddlesome foreign “speculators” in reference to foreign holders of Argentinian government debt, statements which she tied to a populist ‘anti-imperialist’ discourse (also present in her confrontational stance over the Falkland Islands). Such sentiments still carry weight in a region sensitive to any hint of exploitation by foreign capitalists.

This is not to say that Kirchner did not overuse the idea of economic imperialism while deflecting away from potentially unrelated economic troubles. And the previous details about the pre-Kirchner administration are not provided to suggest that a government should not take responsibility for the mistakes of the prior administration. But these details do help us to understand why so many Argentinians were supportive of Kirchnerismo to the last, and why, to qualify The Economist’s prediction of the demise of the Pink tide, leftist nationalist populist movements are probably likely to endure in Latin America.