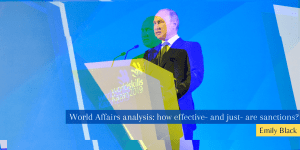 Following the Russian invasion of Ukraine, the G7 nations have implemented an expansion on economic sanctions against Russia that began in 2014 after Russia annexed Crimea. These sanctions are aimed at constraining and isolating the Russian economy in order to pressurize Vladimir Putin to abandon the war on Ukraine by decreasing economic revenue.

As part of these sanctions, the G7 has frozen the assets of Russia’s central bank thereby limiting access to dollar reserves whose sum total is some $630 billion.

Furthermore, the US, EU and UK have collectively banned individuals and businesses from dealings with the Russian central bank, and the Russian finance ministry.

Simultaneously, Russian banks have been removed from the ‘Swift’ (Society for Worldwide Interbank Financial Telecommunication) messaging system which enables the rapid access of money transfers across borders. The aim of implementing Russia’s expulsion from Swift is to harm Russian banks’ access to instantaneous payment transfers, meaning that Russian companies will face increasing delays in payments.

Moreover, the removal of Russia from Swift is part of the US, EU, and the UK’s wider aim to ‘ensure that banks are disconnected from the international financial system’.

Beyond this, the economic sanctions have also targeted oligarchs suggested to be in Putin’s inner circle by freezing their assets.

However, Western policymakers have presently not limited payments to Russian energy resources that constitute 50% of Russian exports for fear that this would lead to exorbitant energy prices in Europe—the content imports 40% of gas from Russia.

Following the imposition of sanctions, Putin referred to the west as an ‘empire of lies’ and the sanctions as ‘unfriendly actions in the economic sphere’ on February 28th. Simultaneously, Putin ordered nuclear deterrent forces to be on alert; a move which Jens Stoltenberg, Nato Secretary General, described as ‘dangerous rhetoric’. Most recently, on March 4th, Putin called on Russian neighboring countries not to impose any sanctions in order to limit aggregation.

Still, the total effects of these sanctions are as yet unknown. For instance, it is speculated that the development of the Russian payment system known as ‘Mir’ in 2015, may serve to compensate for Russia’s expulsion from Swift. Combining this with the fact that oligarchical wealth is much concealed—alongside the continued European payments towards Russian energy reserves—it has been speculated that such sanctions are ‘too little, too late’. 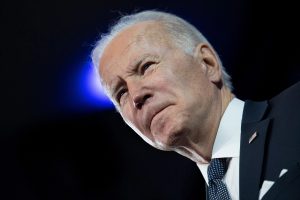 The west, including the US, has isolated Russia from key financial institutions and payment systems, most nobatly Swift.

Despite this, the sanctions have caused economic turmoil amongst the population. Soon after the announcement of impending sanctions, the Russian ruble devalued by 30 % against the dollar, and interest-rates have subsequently soared. Following this, Russian citizens lined up at ATMs across the country with a hope to withdraw their money with prices set to significantly rise. Importantly, the ability to recuperate finances from Russian banks is increasingly problematic. In all likelihood such sanctions will lead to a shrinkage in household income, which combined with inflation, will decrease the purchasing abilities of Russian citizens for consumer goods. Notably, the expectation of inflation is that the economically vulnerable are increasingly affected, which begs the question as to whether sanctions that harm the economically vulnerable Russian population are justified.

To gauge this, the sentiment of Russian citizens must be understood. However, it is difficult to fully comprehend the extent of public support towards the Russian invasion of Ukraine, given that the Kremlin has seized almost the entire control of Russia’s independent media, condemning opposition to the invasion, and circulating media with anti-Ukrainian propaganda. However, it is nevertheless considerable that uprising and protest against the Ukrainian war both virtually—Russian citizens have been posting online—and on the streets of Moscow, fuelling the conception that the Russian-Ukrainian war is not supported by numerous Russian citizens.

In this aspect, it is perhaps increasingly difficult to determine the extent to which the harms perpetuated by economic sanctions to protesting Russian citizens are justified.

The justification of these sanctions is based on the premise that they will be successful in deterring Putin from the Ukrainian invasion. Hence, they should be implemented as a means to this end. Yet, the reality of this is hard to speculate given that sanctions on a country of Russia’s global status are relatively unprecedented.

While comprehensive studies show that sanctions are partially successful only 34% of the time, evidence suggests that sanctions stretching over increasing time periods are less successful. This is because the target state gradually learns from its ‘growing experience in evading the sanctions’ (Colin Rowat, Professor of Economics at Birmingham University). Drawing upon this, some have inferred that the increased duration of economic penalties against Russia since the Crimean Crisis of 2014 has resulted in the Russian economy becoming a ‘fortress’ enhanced in withstanding sanctions.

Thus far, the sanctions have led to the public vexation of Putin and caused extreme economic instability. However, expert opinion is divided concerning whether sanctions will only serve to harm Russian citizens by contracting the economy. On this basis, it is emphasized that sanctions should be implemented alongside other foreign policy tools to deter Putin.

All data were correct at the time of writing.

Main Image: WorldSkills UK via Flickr with license. Changes to the in-text leader image were made (text added and image altered).