A perpetual plight: an impending humanitarian crisis in Afghanistan 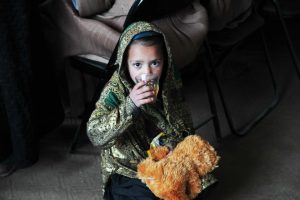 Located in Kabul’s plush diplomatic enclave, the Arg Palace bears a desolate look since its last occupant, President Ashraf Ghani, fled abroad. With him in exile, his Islamic Republic ceased to exist. After a relentless blitz, the Taliban toppled the US-backed government meaning that the Islamic Emirate of Afghanistan is back. With hard-line Islamists at the helm, Afghanistan is a pariah state: its regime is not recognised by any country. As the Taliban are busy consolidating their rule, alarm bells are ringing. The economy is in the doldrums; hunger and poverty are surging, with the potential to snowball into a humanitarian disaster. As a new reality dawns in Kabul, policymakers, global leaders and international organisations are perturbed.

After toppling the Taliban in 2001, the US focused its mission on state-building and its envoy, Zalmay Khalilzad, was instrumental in this (incidentally, he was also the signatory of the ill-fated Doha Agreement). Aid money propped up a government, a standing army, and a battery of institutions. Hamid Karzai’s government, backed by scores of anti-Taliban warlords, oversaw a transition: as money flowed in, Kabul flourished, but the remainder of the conservative hinterland remained backwards. The high-handedness and top-down approach of the government failed to sow the seeds of democracy and their ineptitude and corruption were largely responsible for aid not being distributed to the masses. A plethora of civilian casualties and drone attacks made the situation ripe for a Taliban revival: as the Soviets learnt bitterly, killing a terrorist does not kill terrorism! Striking at the first opportunity, as the US withdrew, the Taliban took control from the government.

The fate of 39 million now rests with clerics and insurgents. Consequently, the US froze all aid money: 9 billion USD of Afghanistan’s money has been frozen by the US (80 percent of Afghanistan’s social spending came from aid money). The resulting chaos, along with the impacts of the pandemic, has crippled the economy. The UN now estimates that around 90 percent of Afghans live under the poverty line: they survive off less than 1.90 USD a day. As a result, 20 million Afghans are on the brink of chronic hunger.

Morally liable, the world has to help. The world at large was instrumental in making Afghanistan a playground. From the British-Russian ‘great game’ to Dawood Khan’s republic, to the Soviet Invasion and Mujahideen retaliation to the Taliban’s toppling, foreign powers have incessantly meddled in Afghanistan’s internal affairs. Thus, the onus to help Afghans largely rests on the world. A pressing concern, however, remains: to dole out help through a battery of NGOs or involve the machinery of the Taliban- thus risking giving them any sort of legitimacy?

The world has resigned itself to the fact that the Taliban are the masters of Kabul. A jaded western world is no longer interested in funding their once allies, the Northern Alliance. China smells an opportunity with large lithium and iron reserves. The TAPI gas pipeline is under construction. The Taliban’s leadership is already hobnobbing with the international community. For all practical purposes, the Taliban is the de-facto government of Afghanistan; only formal recognition remains.

The NGO approach is unsustainable. For starters, it is too sporadic; it is no substitute for an able bureaucracy. Its actions will be hindered by a lack of men on the ground: there are unlikely to be many takers to work in Afghanistan. Corruption and security, too, are major issues. For help to percolate to the masses, there must be cohesive action from both top-down and bottom-up approaches (India’s green revolution, for example). The Taliban has boots on the ground with elements deep-rooted in the religious, conservative countryside; there exists- at least on paper- a functioning bureaucracy. Bypassing the Taliban would be next to impossible. To the massive cost of legitimising the Islamists’ rule, there is a massive option to exploit: a carrot and stick approach to reform the Taliban into moderation.

Principally, as the Taliban repeatedly insists, it has to live up to its promise of moderate governance. It cannot be seen taking foreign aid on one side and being in bed with terrorists on the other (as promised in the Doha agreement). Its odious record regarding human rights has to change: extrajudicial killings and murdering dissenters among other atrocities have to stop; this has to be verified by an international watchdog. Importantly, its treatment of women is going to be under intense scrutiny. As promised, they have to facilitate girls’ return to work and classrooms.

Ideally, it should be lured into striking a peace deal with the Tajik NRF to form an inclusive government. All aid, and above all, a seat at the table, should be contingent on the above. The idea of aid should be a carrot to moderate the Islamists. More than the giving of aid, the distribution of it has to be the subject of focus, given that it is not possible to rule out the Taliban using aid money for arming themselves. Aid in terms of food supplies, medicines, setting up of schools and hospitals seems conducive as long as the Taliban guarantees the security of aid workers. Without interfering directly in the Emirate’s policy, the world should nudge the Taliban into reform, before awarding it any sort of legitimacy. The West’s role in the same will be instrumental, for without it, China, who will look the other way with human rights, will attempt to fill the vacuum.

Ultimately, the point of this entire exercise is to defend Afghans- a people who have lived as pawns. As soon as possible, as UN’s Antonio Guterres says, we need to ‘inject liquidity into the Afghan economy’. Essential convoys of food and medicine must reach starving masses as a matter of urgency. The international community, as well as us as people, cannot let this unfold on our watch.