A Call From Munich 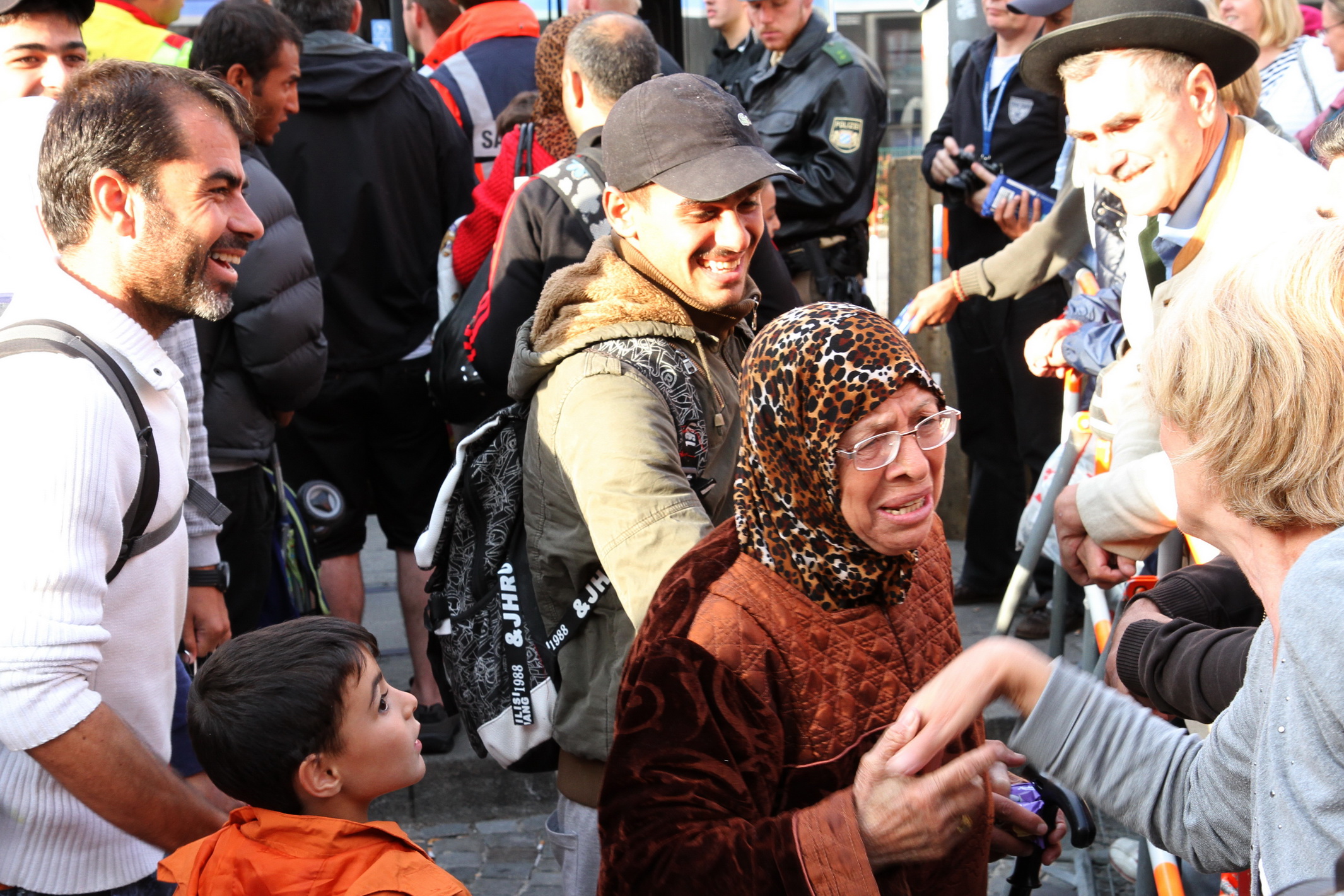 When my mother called me – from Munich, the city where I grew up – I was reading an article in the Süddeutsche Zeitung, a German newspaper, about the “Refugee situation” in Bavaria. Merkel’s government had decided an hour ago to close the border with Austria, and halt all trains. This news was a turn in the current EU refugee politics, and once again I was worried about what would happen.

The first thing my mother told me was how she ended up sweeping the Hauptbahnhof (Munich’s central station) at 4am last night, to keep moving and to keep the other volunteers awake,on the night of September 12th which had brought and would still bring a few thousands refugees to “Germania,” as the refugees call it. “What is going on here is incredible” she said. “Hundreds of volunteers work here in various shifts 24/7, and when we sent out a call via Facebook or the radio at 6pm, asking people to donate duvets, we have mountains of them at 7pm”. The actual problem however is not to provide the refugees with food, water and clothes. Despite the efforts of Munich’s city administration to find suitable shelters for the more than 30,000 people who arrived within the last four days – there are even plans to transform some Olympic sport halls and empty apartments into dormitories – the harsh reality is that Munich cannot deal with this situation on its own. As a matter of fact, a state of emergency has been declared a few days ago, something Munich has not seen since 1945. And yet, while Dieter Reiter, Munich’s mayor, is constantly calling other cities, ministers and even Frau Merkel for help, barely anything has been done. “I have been told to call back tomorrow afternoon” complains Mr. Reiter to the Süddeutsche Zeitung. “Tomorrow afternoon! When a few thousand refugees won’t have found anywhere to sleep, because all our centres are overfilled”.

In the meantime, it all lies in the hands of the volunteers and the rest of German civil society. Much has been said about this unprecedented altruism, which has, on a national and international level, been rightfully praised and repeatedly thanked for. Some have felt that this kindness was to be explained by the deeply engrained guilt most Germans feel regarding what happened 70 years ago. And given that some foreign press in some places still enjoy being a constant reminder of the Second World War atrocities by picturing Frau Merkel with Hitler’s moustache, this theory is not too absurd. Yet this explanation is far from adequate, and would be unfair to all those helping. Even after having worked myself for more than two months in a school for teenage refugees who came to Germany without their parents, I cannot offer such an explanation. Neither is such an explanation necessary right now. Instead, I want to present some personal reflections and impressions.

First of all, it is important to stress that what happened over the summer – that is, the consecutive moves by the German government – was bound to happen sooner or later. Declaring that Germany would accept all Syrian refugees regardless of their country of entry in the EU (effectively putting into question the already much disputed Dublin Regulation), was only a sign of acceptance that something had to be done, and quickly. In the last few years, Germany had become increasingly “attractive” to refugees, an Eldorado hopefully able to provide them with a house, a job and most importantly, safety. Moreover, refugees arrive whether one wants them or not – Munich itself had already been receiving some hundred refugees a day in the past few months. Syrians, Eritreans, Afghanis and all others flee, not because they want a Mercedes or flat-screen TV. The harsh reality of dictators or militias, bombs and wars, famine and inhumane life chances motivates if not obliges them to leave their homes involuntarily. And as one could think, Greece, Hungary, Italy and all others would not indefinitely be able and willing to host the mass of refugees arriving every day.

This is why I regard Germany’s move as a clever one – for at least four reasons. Warmly welcoming refugees would, first of all, foster integration. If someone feels welcome somewhere, the likelihood that this person will voluntarily invest in his/her integration is much bigger. And integration is key to a well-functioning state – one only needs to look at the situation in French banlieues, or other non-integrated areas to realise that democratic participation, life chances, and crime rates tend to score poorly. Secondly, civil society was already so implicated in this process that it would have been absurd and a total waste of potential to counter this movement. Instead, accompanying this movement with adequate policies not only confirmed charities and volunteers in their willingness to help, but also motivated many others to join. If the German state had had to organise everything itself, I am not sure what sort of humanitarian crises would have resulted – but it would have been sizeable. Thirdly, Germany has sadly, in the last few months, been home to several racist attacks, consisting in the insulting or beating up of refugees, and in the burning down of asylum centres. Countering those incidents by welcoming refugees and simultaneously backing all actions of the civil society could not have been a more successful reply to anyone questioning universally regarded human values. It strengthened an effort to halt all right-wing extremism, simultaneously implicating all sectors of civil society into the integration of refugees. Lastly, Frau Merkel who seemed well aware of her European-leadership power, may have realised that “opening its doors” to refugees would put other European leaders under such pressure that they would be forced to follow. Of course, this would mean in the immediate that Germany would be overwhelmed by a crowd of refugees. In the long run however, the hopefully soon to-be-agreed quotas will bring some order, agreement and stability to the current crisis. I would be naïve to believe that this last point has worked as successfully as the other ones; I might even say that it has “failed” in many regards. Quotas seem still far away, most European countries seem still far too reticent to do the necessary – not lastly, and very shamefully, France and the UK – and even Germany has resorted to temporarily closing its border to Austria.

So yes, it is still all very much of a chaos. And the chaos will grow when Munich will host, like every autumn, the Oktoberfest, welcoming a few million tourists – a fair amount of them drunk, creating enough problems for the police to deal with. One can only hope that this will not end up in too much violence. In the meantime, my mother and all the other volunteers will keep on working 24/7 at the Hauptbahnhof, giving out food, water, clothes and hope to the exhausted refugees arriving there.

Once again, more than 10.000 refugees have arrived yesterday. My mother called me. Munich called the Bavarian government, passing it on to the rest of Germany. Germany called Europe. And I believe this call may have reached a few other people around the world – not lastly the Australian government. It is sad no one bothered picking up when Italy or Greece called. Now that heads of Europe are on the other end of the line, it is to hope that they will not hang up.