The test of the west: countering the authoritarian wave 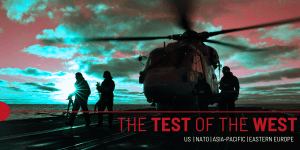 The west is experiencing a crisis of confidence. Its foremost character, the United States, remains trapped in domestic discord, handicapped by a beleaguered president and hamstrung Congress. Still reeling from the untimely decision to withdraw from Afghanistan, President Biden has struggled to rejuvenate his fortunes; forlorn and out-of-touch, the world remains unnerved by the fragility of American politics—a sentiment which is undoubtedly shared by allies and adversaries alike. A shaky G20 and an uncompelling democracy summit did little to change perceptions. Yet, if a lack of self-belief is indicative of a regressive liberal international order, it is also a harbinger of inevitable geopolitical competition. For an ambitious China—alongside an opportunistic Russia—has long sought to disrupt the global balance of power. Much of this has come to the fore in recent weeks; with Ukraine on the brink and the Taiwan Strait in a tentative state, an impulse of authoritarianism looks set to test the west. 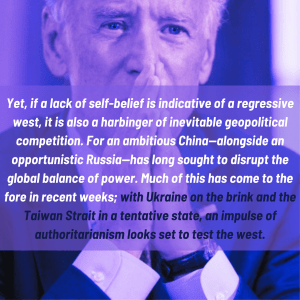 These fissures, though, have long been in the pipeline. In truth, the Chinese government’s decade-long accumulation of soft power—often established through coercive economic arrangements—broadly engenders Beijing’s ambition of strategic and political predominance in areas left neglected by the western world. Its swelling military is also suggestive of a more hard-line approach—a trend that has disconcerted democratic Taiwan, the subject of Chinese territorial contention.

Russia, although dwarfed by the geopolitical stature of China, is an antagonist with bold ambitions of its own; boosted by European despondency following its annexation of Crimea in 2014, the Kremlin has successfully eroded strategic unity in the EU, further problematising western political cohesion. Be it through sustaining authoritarian regimes, notably Belarus, or teasing military invasions on the Ukrainian border, its actions are designed to provoke tumult in US and EU-led policy circles—something Vladimir Putin will look to continue.

In truth, a new era of great power rivalry is forming. However, this test is as epistemically important as it is material; inherent in the Chinese and Russian challenge is an intrinsic dedication to the virtues of authoritarianism—a threat that undermines the global political authority of western nations and institutions.

Yet, it would be incorrect—even misguided—to suggest that China and Russia are the causes of the west’s incoherency. Their motivations, however provocative or audacious, are cultivated through the same geopolitical conditions as those of the liberal international order; taken apart, it is apparent that the US and its allies are fatigued and maladroit, leaving a vacuum of leadership all too readily exploited by sanguine authoritarians.

Indeed, an ad hoc web of autocrats has slowly emerged to fill this void—Venezuela, Turkey, Jordan, Cuba and Kazakhstan are all paid up members—with Chinese and Russian money and technology core to the growth of this group. Its activities are of malign motivation: the repression of activists and journalists; the purge of political competition; the decay of democratic principles; the surveillance of entire populations; and the persecution of religious and ethnic minorities have all been used to condition anti-democratic sentiment. Ultimately, it appears that western democracies are fighting an enemy they have yet to fully comprehend; although not officially institutionalised, the growth of authoritarian influence is more fluid than compact, its resources seeping through borders and across seas. By contrast, the west resembles that of a decaying rock—too static for its own good and weakened by its immobility. This must change. 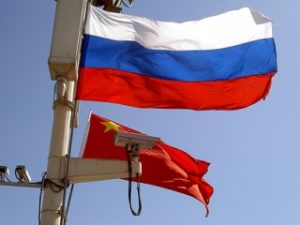 Image 1- Russia and China have been at the forefront of an authoritarian web, corroding trust in democracies and promoting dangerous policies.

What the last few weeks have demonstrated, then, is the culmination of two forces of asymmetrical trajectory: the growth of confident authoritarian actors—principally China and Russia—and the weakening unity of the democratic community. In eastern Europe, the Kremlin has reasserted its military presence by the Ukrainian border, stationing over 100,000 troops on land and restarting military drills near the eastern front of Belarus, a mere 47 miles away from Kyiv, the Ukrainian capital. Although dialogue between Putin and Nato has already taken place, Russia is likely to veto the response to its sweeping demands—a probable result considering the inconceivable nature of the Kremlin’s conditions. But, for the west, this is a lose-lose situation. Anything deemed by Putin to be disingenuous could, in his eyes, legitimise an invasion of Ukraine, while heeding to Russian proposals would further corrode the principles through which the west seeks to govern the world. With China already having declared its support of Russia, the space for Nato equivocation has become smaller. 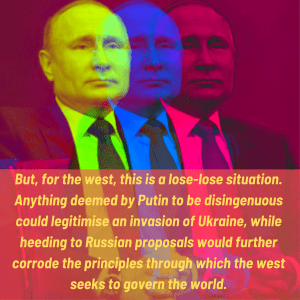 While the possibility of a Russian invasion of Ukraine intensifies, China, the authoritarian superpower of the world, continues to toy with the fate of Taiwan. Beijing has repeatedly violated Taiwanese airspace, flying 39 warplanes over its territory as recently as January 23, 2021. Indeed, Chinese military presence has been—and will not cease to be—omnipresent. Both at sea and in air, China asserts its authority on Taiwan—an entity it claims to be its own. An East Asian democratic success story, the US maintains a policy of ‘strategic ambiguity’ if it were to ever be invaded by Xi. But with Beijing amplifying its display of force in the Taiwan Strait, the threat of a conflict between Chinese and western forces—accidental or planned—is alarmingly high. To its credit, the US has been active in establishing its own Pacific strategy, announcing a joint nuclear submarine pact with the UK and Australia in the autumn of 2021. However, with Chinese confidence in the ascendency, a more coordinated international policy from Nato is necessary—in the eventuality of war, the west will need to form a united front to match the ambitions of Xi.

But all is not lost. The western world is not collapsing—even if its authority and unity is eroding. China, despite its attempts to decouple from American finance, is still a player in a US-led game; the liberal order’s political infrastructure—Nato, the UN, the G20, the G7, the EU—vastly outweighs anything authoritarian leaders can offer, with Russia particularly isolated from formal institutional participation. Yet, it is of vital importance that the west reasserts its commitment to democratic values— but each state must first pursue a path of domestic reform, with a re-energised internal political environment conducive to global change. In many respects, this is the real test of western character. In turn, a more cohesive, coordinated international scene can be cultivated—a robust, decisive Nato would act as a staunch deterrent to authoritarian provocation, weakening the link between diplomatic disputes and conflict.

Tragically, though, it may already be too late for the people of Ukraine.

This article follows the style guide of The Guardian.