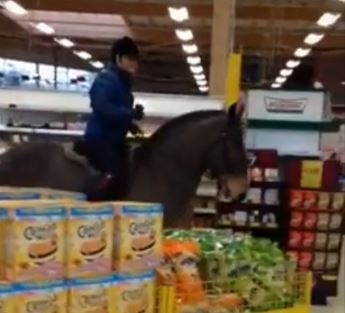 Harvey the horse trots down the aisles

A woman rode into a branch of Tesco as part of a ‘Neknomination’ challenge.

She is confronted by a security guard, who promptly calls for the duty manager.

After consuming the drink, Miss Ralph turns to the camera to nominate a series of friends, as well as the security guard.

“On Monday afternoon police were called by staff at the Tesco store in St Helen Auckland reporting a number of young women had been on the premises, with one of them riding a horse.

“Those involved are believed to be well-known to both staff at the store and to ourselves and we will be arranging for them to attend their local police station at the earliest opportunity.

“At this stage we are trying to establish whether a criminal offence might have been committed and discussions have taken place with the RSPCA regards to the welfare of horses.”

In an interview with the Northern Echo, Miss Ralph commented: “It was something nobody else had done. It was just harmless fun. Everybody seems to find it really funny.”

The internet craze, which is popular among students at Durham, has been linked to the deaths of two people in Ireland.

Helen Goodman, MP for Bishop Auckland, described the posting of Neknomination videos on social media as “totally irresponsible” and implored Facebook executives to “grow up”.

Miss Ralph added: “I didn’t realise how far it would spread and how many people would see it. I have had messages from as far as Australia calling me a legend.”