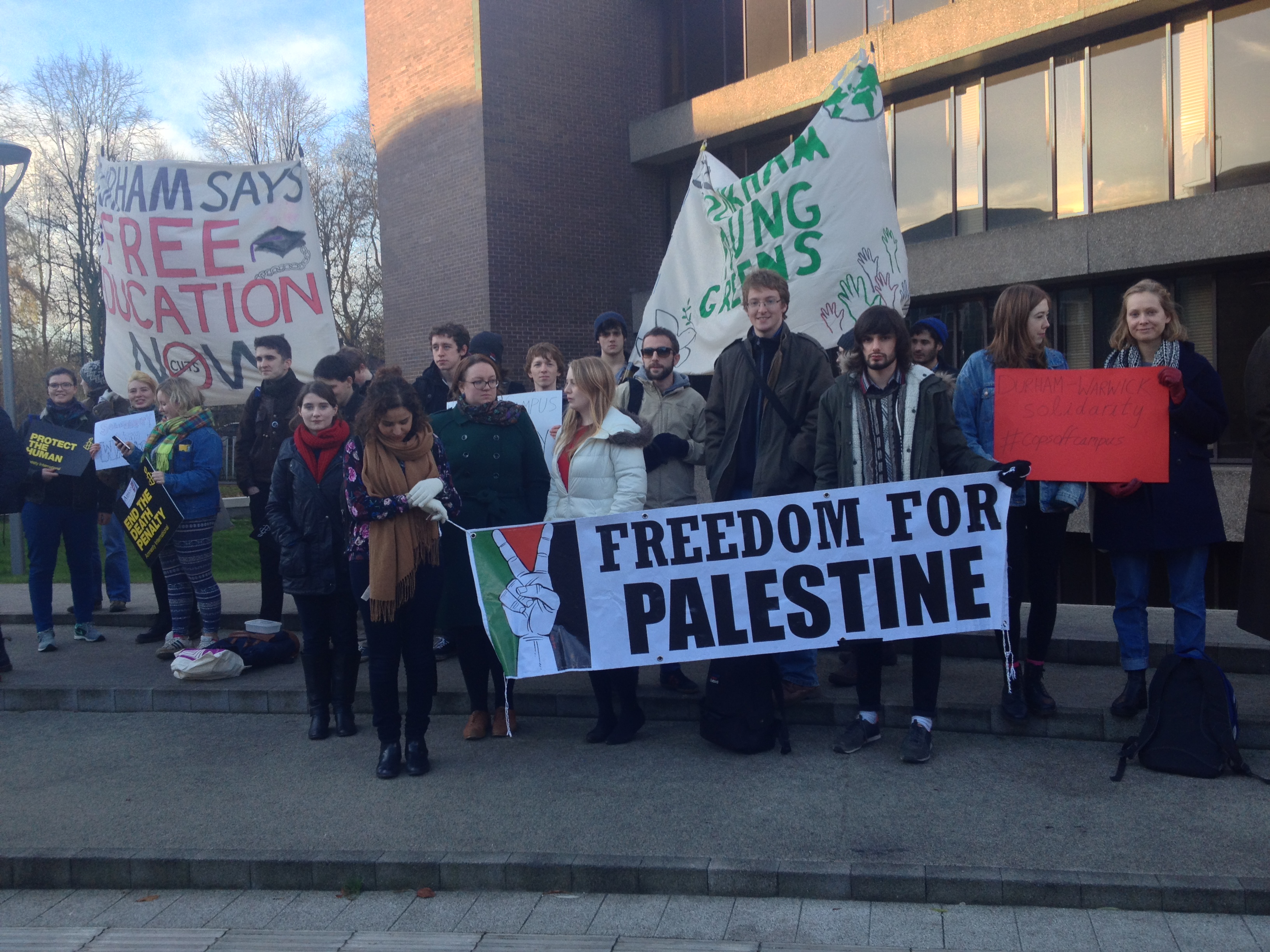 Students demonstrating on the Science Site on Monday afternoon to show solidarity with students at Warwick University were left angered when the protest was broken up by University security.

On Wednesday December 3rd, Warwick students taking part in a sit-in for free education were allegedly victims of excessive force by police, including the use of pepper spray and the drawing of a taser. Monday’s demonstration in Durham was one of several across the UK in solidarity with the students at Warwick.

Harry Cross, a participant in the demonstration, described the main aim of the protest: “We wanted to express solidarity with Warwick student protesters who were the victims of unjustifiable police brutality. It is important to realise that students across the country are not indifferent to such an attack on our democratic right to protest.”

Roughly forty students were present at the initial demonstration outside of the library. Campaigning groups from across the university were invited to bring banners, placards, and posters as a visual celebration of Durham’s protesting spirit.

Slogans included “#copsoffcampus”, the slogan used in Warwick, “Our Campus. Our Rights” and “Whose campus is it anyway?” among others. Participants in the demonstration were pleased with the turnout, which was very high for Durham, and were impressed that such a turnout was achieved at very short notice. 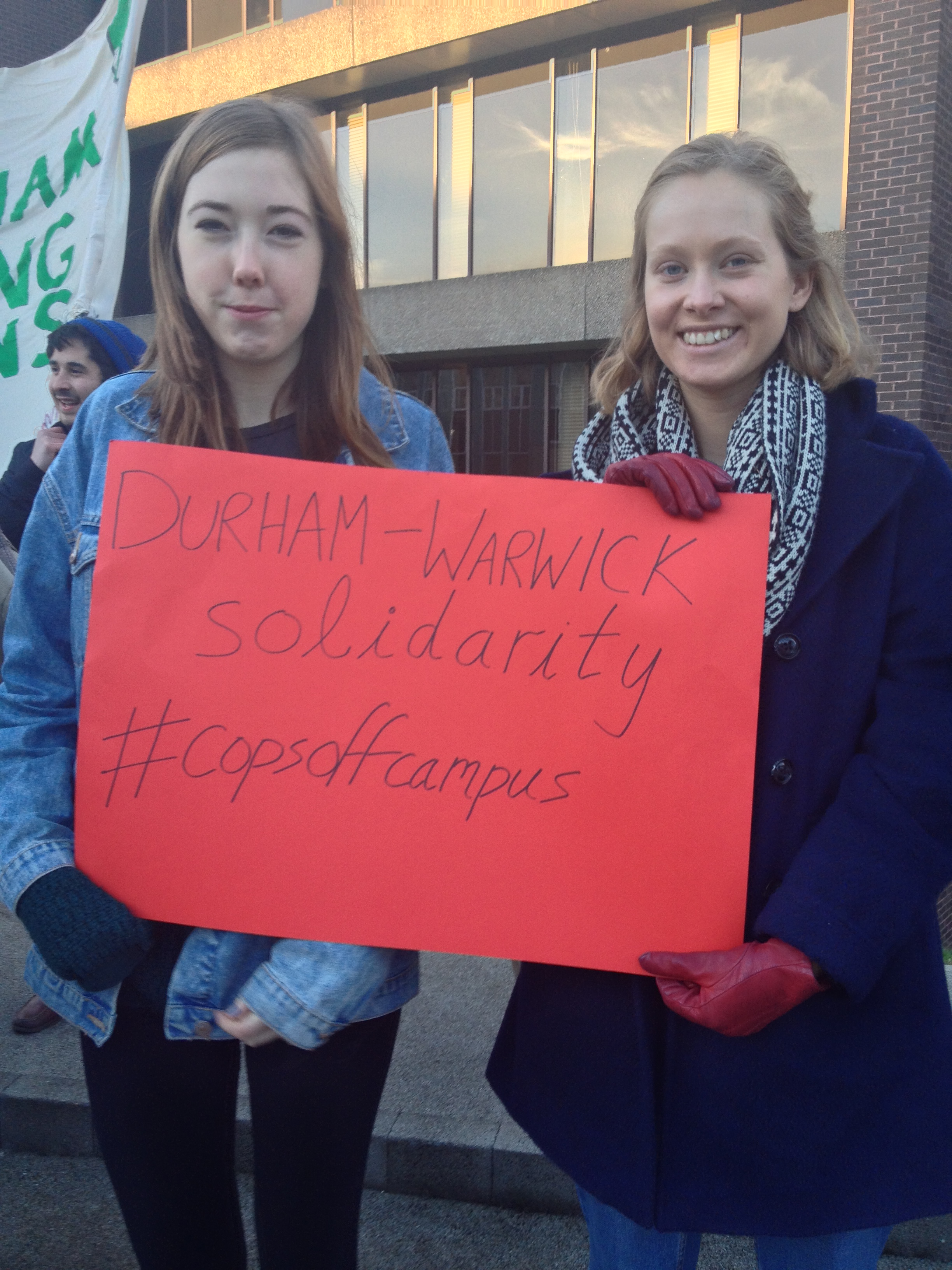 After around an hour outside the library, the protesters marched to the Palatine Centre, where they positioned themselves in the reception area and participants gave several speeches about their various causes, including the case for free education and the use of police brutality worldwide to suppress legitimate protest.

The speakers also called upon Ray Hudson, Acting Vice-Chancellor of Durham University, and the candidates for his successor, to engage seriously with student campaigns at Durham University.

It was clear that staff were visibly uncomfortable with the student presence, and they were keen to ensure that the students kept all passages clear to minimise disruption in the Palatine Centre itself and the Palatine Café. The protesters fully cooperated with the requests of the staff.

After the speeches, the protesters began chanting “Our campus! Our rights!”, which was clearly deemed by security, already present as part of a normal patrol, to be too disruptive.

Protesters were asked to leave and security encouraged them to leave by the exit they were positioned in front of, by the Palatine Café. Students made the decision to leave through the far exit, which involved walking the length of the Palatine Centre, however security guards physically blocked their way and forcibly directed the protesters in the direction of the closer exit.

One student who managed to walk past the two security guards was picked up by one guard and shoved back. It was also at this point that one of the security guards requested that the police be called; however it is currently unclear how far this request from security was taken. Most protesters did manage to leave by the far exit, while continuing their chant, and the protest then dispersed. 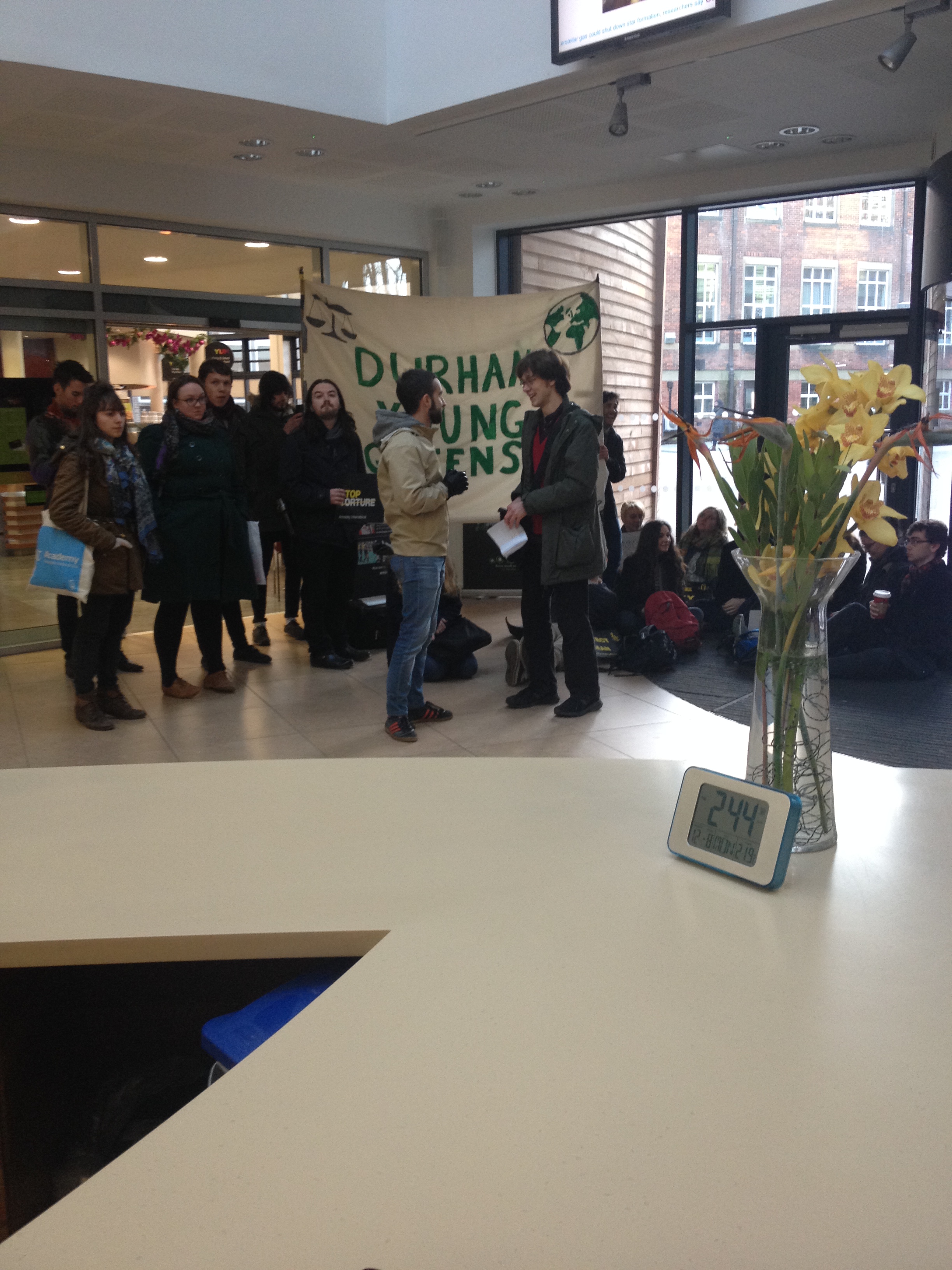 Student protesters inside the Palatine Centre.

Those taking part in the protest were left extremely angry about the actions taken by security staff, though were keen to emphasise that the individuals involved were simply doing their jobs, and that their actions show a bigger institutional attitude problem.

William Pinkney-Baird, another participant in the protest, said that he was “dismayed” by the reaction and while he does “recognise that they [security] were taking orders and may have feared repercussions from the University” he believes that “the University should review its policy towards peaceful protest”.

He went on to say that he is “extremely concerned by the fact that the police were called, as we were specifically protesting against the use of police violence in a university setting, and peaceful in our conduct”.

Mr Cross said: “It is disgraceful that Durham University chose to call the police against its own student body. As students, we are encouraged to think critically.

“It should come as no surprise when such critical thinking translates into action”.

He went on to say that this reaction “demonstrates the relevance of our protest and that the issues raised are not relevant to just a single university.”

Mr Cross also said that “Durham students refuse to be seen as apathetic and we are prepared for sustained campaigns on issues such as our right to protest, lower accommodation fees and a living wage for all university staff.”

A spokesperson from the University has said this afternoon: “The university is committed to freedom of expression within the law and we encourage free expression and debate amongst staff, students and visitors.

“Yesterday’s protest took place in the Palatine Centre where many people work and the students agreed to demonstrate peacefully. When the chanting began, the students were asked to leave the building so as to minimise disruption to University business.”

How do you feel about the response by the staff? What about the protest in general? Comment below and get your views heard.