This House Believes Feminists are all too often Sexists in Disguise 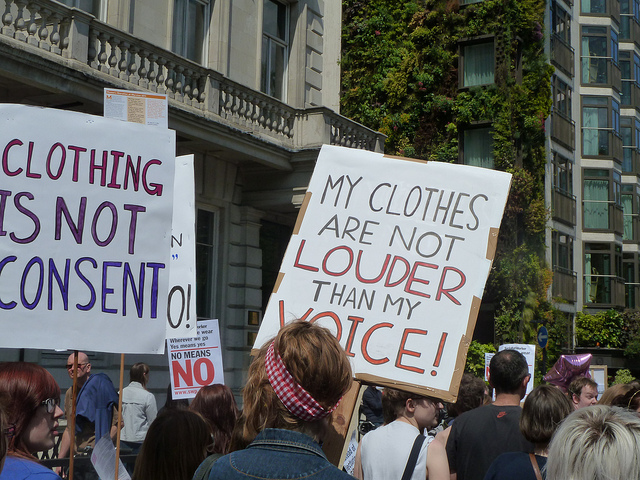 Feminists: Fighting for equality or superiority?

The Union Society will begin Epiphany term’s events on a high this evening as their guest speakers meet to debate the topic of feminism, and specifically the motives that lie behind this movement.

In a country where the legal rights of women appear to have drastically increased throughout the twentieth and twenty-first centuries, many claim that there is no longer a need for the feminist movement to continue the fight as it has already achieved its aim of equality. Websites such as womenagainstmen.com even go so far as to claim that feminists are reversing the inequality and using the political movement as a means to ‘trampl[e] men’s rights and their dignity into the ground’, with evidence cited including the television advertisements of Australian women’s health campaign which feature male humiliation whilst a version with roles reversed would provoke outrage. Even female celebrities have come out against the concept, with Taylor Swift claiming that she does not ‘really think about things as guys versus girls’, highlighting the rift between the sexes that many see the movement as widening rather than eliminating.

Yet despite universal suffrage and similar working rights, feminists continue to claim that changes in the law have not necessarily brought about the same level of cultural shifts. This was brought directly into the public eye after the release of last summer’s hit single ‘Blurred Lines’ by Robin Thicke, prompting claims that the song promotes rape and a victim-blaming culture and spurning the youtube parody ‘Defined Lines’. More recently, Cate Blanchett was caught on camera entering the US Screen Actors Guild Awards and demanding of the photographer if he also takes floor to head shots of the men’s outfits, and even Durham University became embroiled in scandal in October as the men’s rugby club in St. Cuthbert’s Society was found to be playing a drinking game named ‘It’s not rape if…’. Today, it will be left to the audience in the chamber to decide if these everyday acts of discrimination represent worrying cultural undertones, or if those fighting against them are fighting for their own superiority over freedom of expression.

The speaker for the proposition will be Swayne O’Pie, author of ‘Why Britain Hates Men: Exposing Feminism’ which was first published in 2011. He claims to not be a ‘misogynistic, reconstructed male’ and states that whilst he believes in ‘equal rights, equal opportunities, equal respect, equal treatment and equal choices for women […] this is not the Feminism that we have in Britain today.’ Instead modern feminism ‘blames and demonizes men’ and leads to ‘widespread cultural, legal and institutional discrimination against men and boys’. He is particularly involved with the rights of fathers and, despite having gained custody of his own three children, has campaigned actively for the group ‘Fathers 4 Justice’ alongside his work with other American men’s equality groups. He is certain to offer a controversial view that will divide the floor as he questions the prejudices that we all hold and our ingrained views on equality.

Speaking for the opposition, we will first hear from Cindy Gallop, an advertising consultant who founded the internet companies ‘MakeLoveNotPorn’ and ‘IfWeRanTheWorld’. The first of these was launched via a TED audience member talk in 2009 and aims to counter commercial pornography with images of ‘#realworldsex’, allowing people to earn money by submitting their own videos for rental. It argues against the myths about sex propagated by pornography, particularly towards young men, and the notion that ‘the only people who are doing it right are the professionals’. The latter is a web platform aimed to bring people together to collaborate in enacting their plans to change the world, and has even been used by the company Levi’s to regenerate an industrial town. Having already managed to get the world talking after her TED performance, Gallop is sure to impress tonight as she addresses how our culture has shaped our views of women and why this needs to change.

To conclude the argument for the opposition Julie Bindel will take to the floor as a co-founder of ‘Justice for Women’, a group which fights against violence towards women. The organisation focusses on the law and the functioning of the criminal justice system in this area, campaigning for changes to policy where women are discriminated against due to their gender and specialising in assisting those who have fought back against or killed an abusive male partner. On her own website, Bindel claims to write about ‘anything horrible that happens to women and children, but also about culture, music, food, film and sexual and gender identity’, and she has travelled the world to visit places as diverse as legal brothels and Syrian refugee camps. As a lesbian she has campaigned for LGBT rights, but has also recently moved her focus onto the culture surrounding rape and the treatment of victims. With her wide range of international experience in the field, we can rely on Bindel to bring a new dimension to what is already a wide-ranging discussion.

The direction in which the house will vote on this matter is impossible to predict until tonight, but what can be guaranteed is an evening of debate which will certainly prove to be as lively and informative as it is controversial, calling on us all to question our viewpoint and how we define ‘feminism’.