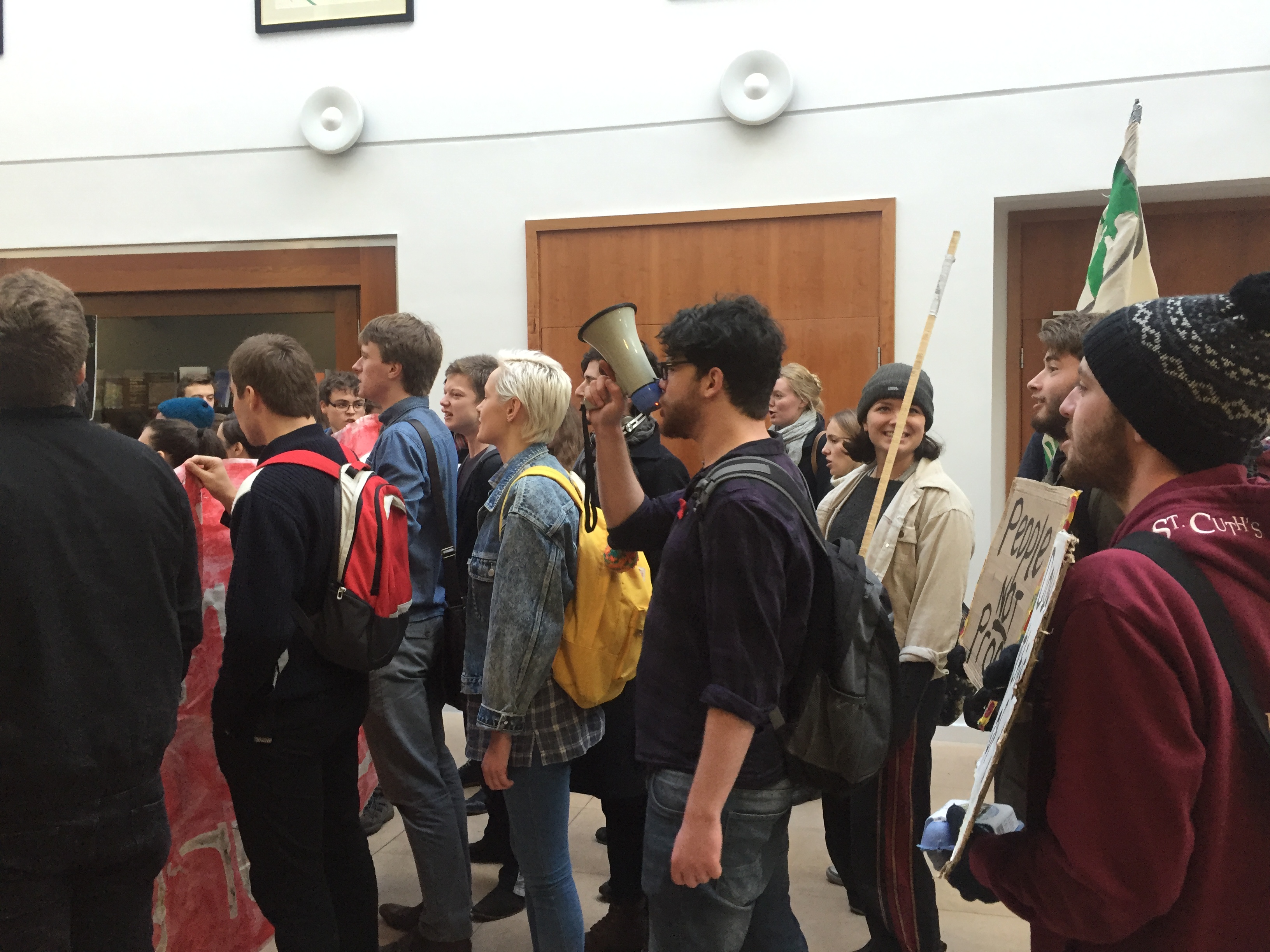 A fresh protest was held yesterday by Durham students demanding a two-year freeze in college accommodation fees. Building upon a demonstration in February that called for reform to “unsustainable college rents”, yesterday’s event took place outside the Bill Bryson Library and inside the Palatine Centre.

Organised by members of Trevelyan College’s Left Society, the demonstration, which according to the society’s executive committee reached ‘‘approximately 150 in attendance in total’’, saw a group of student activists chanting their disgust at the prospect of further above inflation rises in accommodation costs. Cries of ‘‘Freeze our fees’’ and ‘‘shove your price increases up you’re a**e’’ rang out across Durham University’s science site. Placards, banners and signs with slogans such as “People over profit” were also very prevalent.

The prices for 2016/17 will be decided when Durham’s University Executive Committee (UEC) meet next month.

Once the demonstration had marched through the Palatine Centre, a ‘symposium’ was held where many activists demanded that the newly appointed Vice-Chancellor of Durham University, Professor Stuart Corbridge, takes action. Some students waiting for lectures appeared bewildered by the sight, but a member of Durham’s Young Greens rallied the protesters by questioning whether ‘‘students had seen a 20% rise in the services we are given by our colleges’’. In unison the crowd of demonstrators responded “No”, demonstrating the profound anger of many there.

With a 20% upsurge in college accommodation fees over the past three years – a standard room (including a shared bathroom and self-catering facilities) now costs £6,819 per annum – some students were clearly enraged that they were not feeling the positive effects of their extra expenditure. Speakers at the demonstration stressed that their campaign would be “sustained”, and one even alleged that Durham University saw students as a “money pot”.

In January, after the decision to raise college accommodation fees for 2015/2016 was announced in November, Professor Graham Towl, Pro Vice-Chancellor and Deputy Warden, spoke to the Palatinate. He tried to counter initial outrage, saying “We are a collegiate University and this comes at a price. Benefits of living in college include strong pastoral support, opportunities to get involved in a wide range of activities – such as college sport, the arts, volunteering – and belonging to a unique environment for students to make long-lasting friendships”.

The Bubble had the opportunity to speak to the President of Trevelyan College’s Left Society, a buoyant Richard Lowdon, after yesterday’s protest. He said: ‘’I feel we demonstrated clearly that this is a significant issue amongst students, both livers-in and livers-out, but also that when the university refuses to listen and disregards student concerns, we are not afraid of sustained and further action’’.

He continued, noting that ‘’We hope that the new Vice Chancellor and university listen and engage with us instead of claiming they promote diversity in the university whilst raising accommodation fees well above affordable levels. We are not afraid to fight against this elitism, tooth and nail.’’

Further comment came from Theo Dye, another active member of Trevelyan’s Left Society. He highlighted that rising college accommodation fees were ‘’something that has been discussed with the university before”, but claimed that “the information supplied in response to these concerns was almost entirely irrelevant’’.