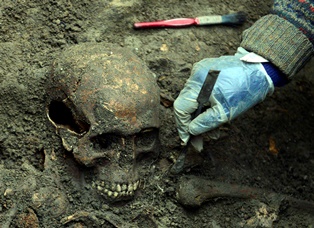 Last week archaeologists confirmed that skeletons found in two mass graves close to Durham Cathedral were indeed those of Scottish prisoners from the Battle of Dunbar.

Taking place in 1650, the Battle of Dunbar saw the forces of Oliver Cromwell defeat the Scottish Covenanting Army. It had already been established through modern calculations that around 3,000 soldiers captured by Cromwell survived a 100 mile march to Durham. Once there, they were imprisoned at its castle and cathedral. However, until now, the ultimate resting place of these prisoners remained unknown. Fortunately for historians, building works at Durham University’s Palace Green Library in 2013 resulted in the unearthing of human bones that helped solve the 365 year-old conundrum.

In a press release Dr Andrew Millard, a senior lecturer at the university’s Department of Archaeology that led the exhumation, explained the difficulty of linking the bodies, which were of at least 17 and up to 28 individuals, to what the history books indicated. “When we had the results of the first radiocarbon dating test we had a very broad date range and were not in a position to draw a definitive conclusion as to the identity of the skeletons”. He then went on to explain how it was only through further tests, which also took into account how some prisoners had smoked clay pipes, that the story of the Dunbar soldiers became “the only plausible explanation” for the remains recently discovered.

In accordance with rules stipulated by the Ministry of Justice the prisoners will be reburied. Canon Rosalind Brown of Durham Cathedral was keen to emphasise that “(it) would work closely with all interested parties to determine the most appropriate course of action for the burial of the soldiers in a manner appropriate to their Christian tradition”.