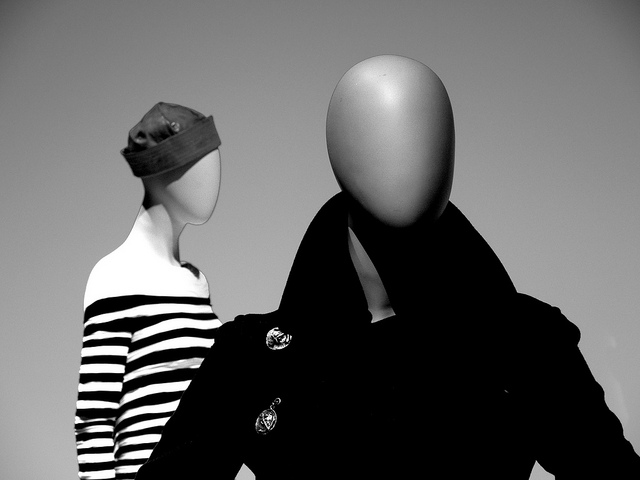 Black comprises everything. So does white. They possess absolute beauty: they are in perfect harmony. —Coco Chanel

After my peers labelled me ‘Cruella de Vil’ for my choice of black and white dress, I decided to explore the history of such statement style and prove that monochrome fashion is much more than what the fur-loving dog-snatcher might suggest.

So when was this undying trend first born? I traced it back to Coco Chanel’s 1926 ‘Little Black Dress’, one of the greatest revolutions in fashion history. This visionary dress transformed the world’s view of black, which prior to the 1920s had been a symbol of mourning, far from the modern chic that it holds today. Chanel fashioned black into a simple but elegant colour and one that has truly stood the test of time.

Yet ironically it was menswear that gave rise to the black and white combination, a now oh-so-fashionable feminine statement. ‘The Suit’ or in other words, what men wear in an attempt to ‘dress up’, is a classic example of monochrome clothing. Not only was the black and white suit a huge part of Chanel’s line, but it was explored by the German designer, Karl Lugerfield, in each and every one of his collections. What’s more is that the fashion phenomenon even chose to dress himself in a slim black and white suit.

Three decades later and the 1960s went monocrazy. This was the decade of fashion revolution, when youngsters could make and wear what they wanted. It was a decade dying for the ‘mod’ look, the statement, anything bold, sharp and minimalist. It was an era of ‘Op Art’, the abstract, black and white art of optical illusions and a time when flowing skirts and ruffles were abandoned. Anything stylish was sharp, distinguished, sleek, but simple. The 1960s was an era of Vidal Sassoon’s sharp ‘bob’ haircut, straight, short shift dresses and A-line skirts. Every outfit had that ‘edge’. Sixties fashion saw a surge in geometric, chequerboard and striped monochrome prints, which in turn transformed the traditional views of femininity. With black and white thriving in the female fashion industry, the sophistication of male suits was transferred to women. Wearing monochrome gave women authority and strength, the chance to break boundaries and stop safely dressing, but stylishly dressing.

It is the impression black and white gives that has maintained its significant position in the fashion industry. Clothes should be classy but comfortable and this summarises the black and white style. There is something reassuring about monochrome, with it being a simple, clean and an ordered way of dressing. A monochrome ensemble will always look smart and with the two colours being at opposite ends of the spectrum, it is impossible for any two other colours to be as dramatic and eye-catching. Black and white are never colours ‘out of fashion’, but are cool, bold and fresh, without being overwhelming or gaudy. They are easy to wear and timelessly classy.

Monochrome has maintained a significant position in the fashion industry for decades and even more so in Spring 2014. The crisp colour combination was a hit at the New York Fashion Week’s Spring Collection, featuring monochrome dresses and jumpsuits from designers such as Carolina Herrerra, Delpozo and Jenni Kayne. Milan Fashion Week also showcased a love of graphic black and white prints, with designers like Jil Sander and Missoni proving that opposites really do attract.

My personal favourite is Victoria Beckham’s Spring/Summer 2014 Collection. Not only was her handsome hubby sitting on the front row in a classic black and white suit, but even her little girl Harper was spotted wearing a white dress and Victoria took the catwalk in a classic monochrome outfit of tailored black trousers, black stilettos and a white open shirt. Her new collection featured a lot of monochrome, but in bold single colours as opposed to the geometric patterns most reminiscent of the 60s. The Beckhams are clearly mad about monochrome.

Monochrome can be worn in so many ways, whether it be a black dress with a pearl necklace, a classic Jeanne Lanvin look, or a pair of black tailored trousers with a white blouse and black blazer to top it off. Remember if you’re wearing stripes, wear vertical stripes, monochrome has a tendency to create illusions of disproportion. Team up your black and white outfits with an oversized clutch or lipstick in a pastel colour for Spring 2014. Don’t clash monochrome prints, but wear a sole print with single-coloured accessories. For a more casual look, try an oversized jumper with a white shirt underneath, the contrasting collar will add character. It’s often the black and white outfits that are the most colourful. Although white is for your wedding day and black for a funeral, there is always a day for monochrome.