“I think the man who had it right was Guy Fawkes” 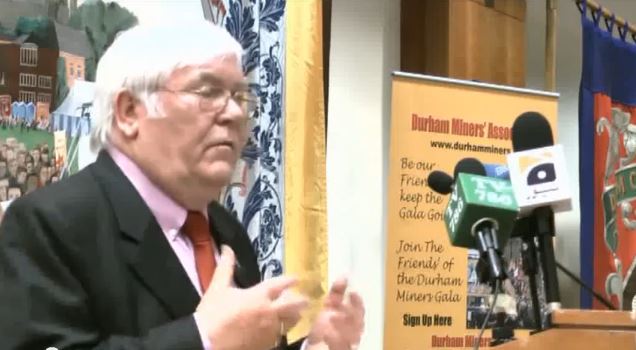 The trade union leader talks about politics, students
and being British

Rory Tingle: Back in April you were concerned that the Durham Miners’ Gala might have to be . In the end, the event attracted record-breaking crowds. How was it such a success?

Dave Hopper: It is the thirtieth anniversary of the Miners’ Strike of 1984–5, so I think that heightened the profile. There is so much happening in relation to corruption, police activity, the release of the cabinet papers and various other things which are making our image much cleaner now.

“I think Thatcher’s government did more damage to the Durham mining villages than Adolf Hitler during the Second World War.”

Are you worried about the future of the Miners’ Association now you no longer have any working miners?

Our future is always in doubt, we have just lost a £2.3 million case on knee litigation in the British courts. It was a total injustice but we had to pay for it and it is very costly. We will keep going for as long as possible, hopefully until the last generation of miners no longer needs help. Because in today’s climate with the Tory-Liberal coalition and the attacks on benefits we need a union more than ever now.

How has Durham changed and is it at all for the better?

We have got a cleaner environment in our villages – there is no coal dust flying about, there are no wagons and railways running in and out with steam and the resulting grime, and there are no accidents at the pits. But there is a tremendous amount of unemployment, despair, and lack of hope in our communities. I think government did more damage to the Durham mining villages than Adolf Hitler during the Second World War.

“I have never been proud to be British, I am a Socialist and a working class man. I never fly the flag.”

Could fracking be useful for boosting the local economy?

It will destroy all of the coal fields. Once takes place, the coal seams are finished. It is a quick easy solution short term but it will destroy what is left of all the reserves of this country. I think coal will have to be re-mined again.

But coal-fired power stations emit a lot of carbon dioxide. Is that really a sensible energy policy?

For the cost of one nuclear power station we could make every coal fired power station in the country clean. There is going to be a world energy crisis and we are going to suffer, and that is because of the policies of the current government, and previous governments.

Are you concerned that Durham City is being overly dominated by students?

Oh, no, I don’t think that is a problem. I am a very live and let live person, and if we can educate our children they will be better people for society, and I don’t see anything wrong with education, education is one of the finest things that you can get in life.

What do you think of Ed Miliband?

He is typical of the people who have taken over the Labour party: the professional politicians. Politics is a career now, it’s a career where everybody is in the trough, it is all money, all prestige, and I think we saw that with the expenses scandal, most of them should have been in jail. I think the man who had it right was Guy Fawkes – you know, he was the man who should have been victorious I think.

“You’ve seen the parties – they are all dressed the same, they all talk the same, and most of them vote the same.”

So you agree with Russell Brand that people should not vote?

As my father used to tell me, people died to get you the vote. The privileged and powerful people wouldn’t allow you to vote, and the working class had to battle for it. The only time I didn’t nearly did not use my vote was after the expenses scandal… but I remembered what my father said and at the eleventh hour I went along and cast my vote.

No, no, definitely no. It is representative of big business power, greed, gluttony, you name it. The Labour Party, in my opinion, is a shadow of its former self, it is a second division Tory Party really. You’ve seen the parties – they are all dressed the same, they all talk the same, and most of them vote the same. I think the Labour Party has been stolen off the working people by intellectuals and academics and people in their for careers.

Are you proud to be British?

I have never been proud to be British, I am a Socialist and a working class man. I never fly the flag. We’ve raped and murdered the world. We should hang our heads in shame that all this exploitation was going on across the world in the great Victorian Empire, when our fathers had no shoes on their feet and were working in the pits and almost starving. Britain has nothing to be proud of, nothing whatsoever to be proud of.