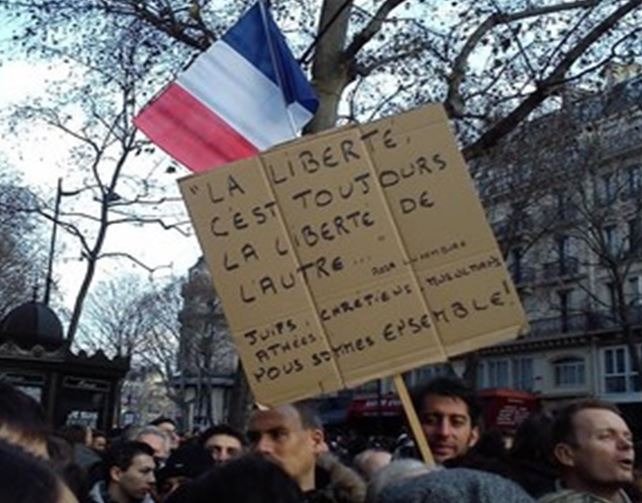 Translation: “Freedom is always the freedom of the other.”
“Jews, Christians, Muslims, Atheists… We are all in this together!”

Over 1.5 million people gathered in Paris on Sunday and a further 3 million in other parts of the country in response to terrorist attacks which left 17 dead.

“Paris is the capital of the world today” declared French president, François Hollande.

It’s estimated that 40 heads of state attended to show solidarity. David Cameron, Prime Minister of the United Kingdom, and Angela Merkel, Chancellor of Germany, were amongst them, as was Israeli president, Benjamin Netanyahu. Leaders linked arms to create a human chain, although Mr Netanyahu was seen at the end without a partner to link with.

The leader of the French far right-wing party The Front National, Marine Le Pen, was excluded from the march altogether. She had been expecting an invite from Prime Minister Manuel Valls but the call never came, even though her party won 25% of the vote in the last European election.

In response to the attacks, Le Pen called for a reinstatement of the death penalty, which was outlawed 34 years ago. Then, in an interview on France 2, she proclaimed that “Islamists have declared war in France”.

Parisian Paulina Henri who attended the march on Sunday surmised that “everyone has come together in peace and tolerance, while Le Pen is invoking violence and stigmatisation”.

Over 3000 security personnel were deployed in the French capital for the rally, including elite marksmen on top of buildings. Several individuals at street level were heard praising these armed watchmen, chanting “Vivez la police” up to them, an unusual occurrence in a country with a colourful record of anti-authority protests.

The event remained peaceful, despite extreme overcrowding. One couple, who hoped to join the march, had been stuck at Place de la République for over two hours because it was physically impossible for so many people to funnel through the streets. 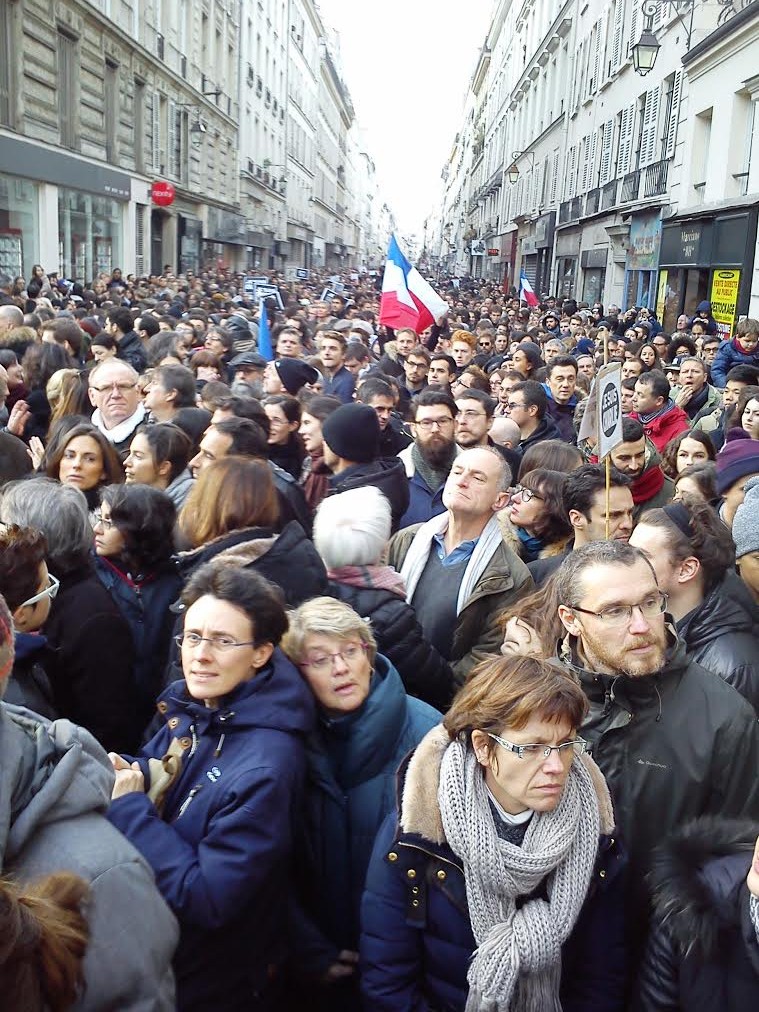 Crowds throng the centre of Paris

Numerous celebrities, including Stephen Fry who was spotted by The Bubble, participated in the rally.

People raised black banners and placards which read “Je suis Charlie” and “Nous sommes tous Charlie” (“I am/we are all Charlie”), in reference to the staff of the satirical journal Charlie Hebdo who died in Wednesday’s attacks. The journal published controversial cartoons designed to ridicule all types of people, not exclusively Muslims, although they certainly weren’t spared.