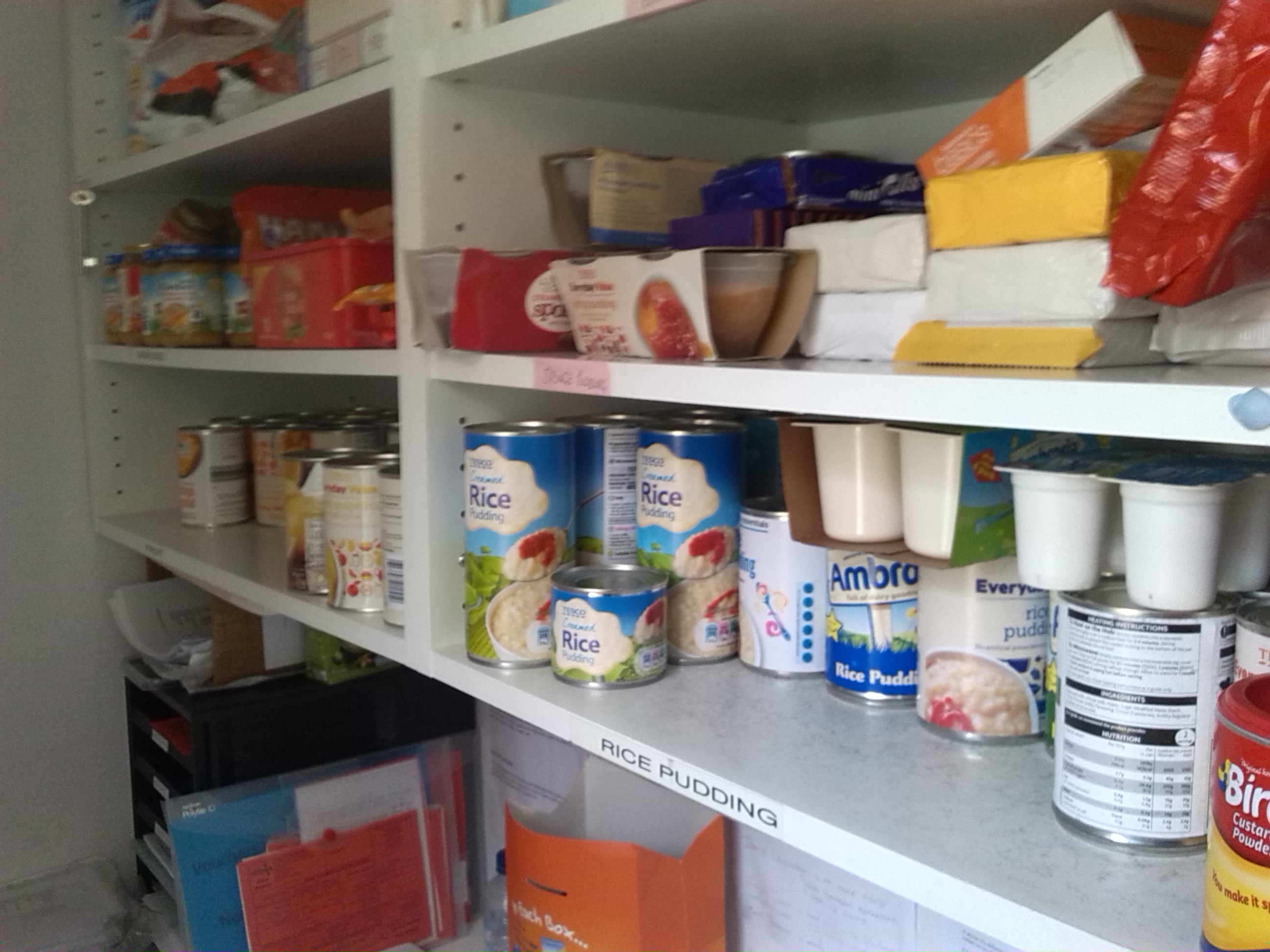 The packaging room at North Road

“When I joined as food bank manager in September 2013 we had thirteen distribution points; now we have got twenty-three.” Bev Anderson, Project Manager at Durham Food Bank, describes the rapid expansion of emergency food provision in County Durham.

Having worked as an accountant, Bev now oversees an operation that feeds 1300 people a month from a small building just off Framwellgate Peth. The financial calculations that once filled her working life have been replaced by the grim arithmetic of poverty: it takes three tealights to warm a tin of soup, she was told by one former soldier.

From her first floor office – which I reach from a flight of stairs lined with tins and cartons of food – she tells me how the Durham Food Bank operates.

“All our clients come through referral agencies: social workers, parent support advisers, MP’s offices, Job Centre Plus – anybody helping with the underlying causes of the problems.

“We want people referred to us when they are getting help with the main causes of their food crisis. Running out of food is just a symptom of the problem.”

Many referrals are for working people who cannot pay the bills: an issue starkly presented in a new study by Loughborough University, which found that living costs are rising three times faster than wages.

Yet Bev primarily blames benefit delays and changes for the high volume of people needing emergency food aid. Nationwide, 49 percent of referrals to food banks arise due to problems with social security payments.

One of the most shocking stories that she tells me is about the problems faced by a mother of an eleven-year-old son. “This lady was caring full-time for her mother, who unfortunately died in November last year,” she says. 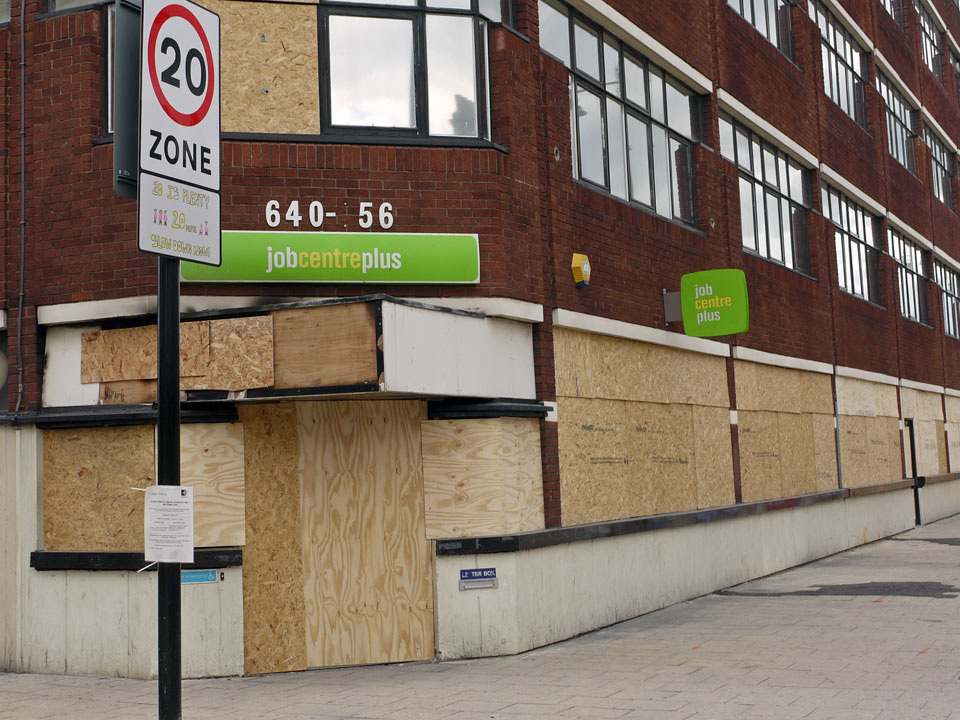 Reforms to the benefits system are causing problems for some people

“She did not know she could access carer’s allowance, so they were all living off her mother’s pension. When she died there was no financial help, so the first problem that she had was how to pay for the funeral.

“The Department for Work and Pensions (DWP) could provide a funeral grant, but the undertaker would not do the job without a £900 deposit.

“So it took nearly twelve weeks to find somebody who was willing to do the funeral, while her mother was lying in a hospital morgue. If DWP had offered to pay the deposit up-front that would have avoided a huge amount of suffering, and might have meant that this particular lady could have gone back to work.

“Now she is off sick long-term with depression, stress, high blood pressure and goodness knows what.”

She has many more stories like this, and there are far too many to write about here. Sanctions imposed under a new system introduced by DWP – such as a fine for failing to apply for a certain number of jobs while on jobseekers’ allowance – feature heavily as causes of the financial insecurity that drives foodbank use.

All represent a problem that is growing nationwide, where the number of emergency meals handed out has increased by 54% in 2013/14 compared to the previous year.

Nearly all of these meals are given out by volunteers, including the two hundred people who staff the distribution points in County Durham.

The outlet at Durham City is based in a cramped pair of rooms, set away from the hustle and bustle of North Road by the car park of the Methodist church.

Here I find June Holt, the distribution point manager, who runs the operation with a team that usually consists of three to four volunteers.

It is two o’clock on a Wednesday afternoon, the sun is shining, and outside on the street people walk by in t-shirts and flip-flops. Inside, the food bank has just opened for business.

“Could you prepare a package for four people, please?” asks June. I have come to help out for a few hours in the hope of understanding more about the reality of food banks in Britain.

I linger in the packaging room when the first client comes in. I consider my options: will she want to speak to me? Or should I just stay put and keep on packing food out of sight?

Thankfully, my inhibitions are soon overturned by the warmth and friendliness of June and her team, and I join them in the sitting room where they are talking with a middle-aged woman over a cup of tea.

When she arrived she was crying, but being able to tell someone about her problems clearly comforted her. She explains how she has so little money that she is forced to wear the same clothes for days on end, and is fed up of being looked down upon by people because of her appearance. 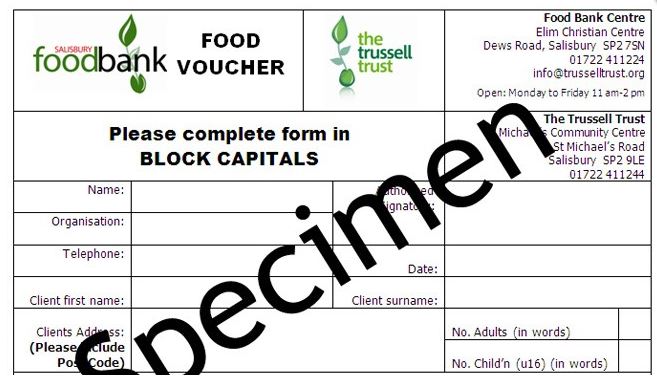 June can understand her suffering: she has not always come to the North Road branch as a volunteer, but was once a client.

Her husband, who worked as a glazier, underwent a heart transplant so was unable to work. Meanwhile, June was forced to give up her job in a shop after her angina worsened.

June’s husband died five years ago, leaving her to survive on incapacity benefit. However, when this was changed to jobseeker’s allowance, she lost £50 a fortnight, leading to her being referred to the food bank.

Now, in better times, she dedicates her energy to helping those who are experiencing similar hardships. She often refers to her previous experiences when talking to clients, serving as a living embodiment of hope that things can get better.

The support offered by the food bank is, after all, temporary. Each person is limited to a maximum of four vouchers, and if this is exceeded then a more thorough investigation of their situation is required.

This approach usually works well, with data collected by distribution points – such as the one at North Road – showing that the average food bank client in County Durham only requires 1.6 food parcels in a six month period.

It is an unusually quiet day for the North Road branch, but there is still a steady stream of people coming to seek help. The only drama comes when an elderly lady enters the packaging room – which is strictly reserved for volunteers – then leaves without saying a word.

She was not coming to get food but dropping some off. June says that she used to be a client, and returns nearly every week to help the people that helped her in a time of need. The kindness of hundreds like her is vital, as Durham Food Bank receives almost no public money.

Yet, with food poverty in Britain rising at a rate that Oxfam describes as “relentless”, food banks are sure to become a very public issue in years to come.