Durham’s stance on spiking: victim-blaming at its finest

After a year and a half in lockdown, many people have viewed clubbing and nights out through rose-tinted glasses – we remember the club nights we spent partying with our friends, the times that we drank more than we should and the silly things our pals have said when they have been worse for wear. However, this reminiscent bubble has burst as people have taken the dancefloor again as we start to remember all the dangers of a good night out.

The issue of spiking drinks has been in the headlines nationally recently with incidents of spiking by injection being reported in Edinburgh. As a university community, Durham has also seen incidents of spiking increase over the course of our first term back to normal with at least five cases affecting students of University college and another being reported from Hild-Bede. Of course, this gives us just a small insight to a much broader picture.

And yet, the message from Durham University’s Student Wellbeing team has been far from great. In a tweet issued last week, the team promoted the hashtag ‘#dontgetspiked’ and suggested that students “contact the police as soon as possible after a suspected incident of drink spiking” in order to allow for an investigation to be conducted. The tweet has been criticised by students and the media alike for placing the blame for spiking on those who have been spiked, rather than urging students simply not to spike drinks. The controversial tweet states that drink spiking is “something that you can prevent from happening to you and your friends” – a statement that seems very much in line with the victim-blaming discourse that is so popular when it comes to issues, such as this, that disproportionately affect women. 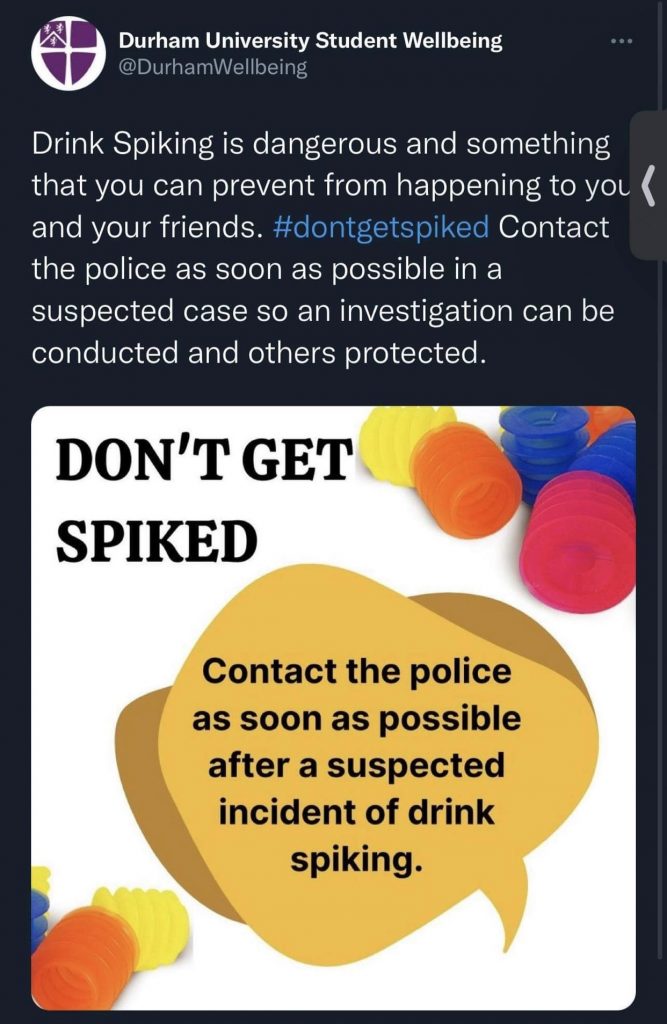 The Durham University’s Student Wellbeing team have since removed the tweet and issued a statement as follows:

“We appreciate the feedback on our recent post about drink safety. Students have reported concerns to us about drink spiking on nights out. We take this very seriously, & [sic] work with the police & others on guidance to help people be safe & report incidents.

We always aim to support our students & will take this opportunity to learn & improve our messages on this important topic. It is our duty to listen to you & address these difficult issues, including training staff & student reps on drug & alcohol awareness.”

Yet, this statement seems sorely lacking in an apology for their blatant victim-blaming – something which has been picked up on by students and members of the public alike. One user replied: “I think the word you’re looking for is ‘sorry’. What’re [sic] you actually doing about your abysmal record on punishing and rooting out the problem? 43 rape accusations and two expulsions last year isn’t taking the issue very seriously”.

Another made reference to the death of former Durham student Sarah Everard, who was brutally murdered earlier this year by a serving police officer, stating: “This is really not a good time to try and reassure rape survivors by mentioning the police, do you lot work in a cave?”.

Similarly, criminology representative and student Lucy Milburn remarked of the statement and the original campaign:

”Within the last few weeks we‘ve been inundated from the mainstream media and the police with how women can do better, how women can take more precautions and how women aren’t doing enough – to also hear this from a university’s wellbeing team really unsettles me. The tweet could’ve been a great opportunity to make a statement of how Durham will never tolerate this behaviour from students, and those caught will be punished, as well as signposting relevant support available to those impacted.”

Interestingly, Lucy explained how the university has access to some of the most renowned researchers who focus on sexual violence within the sociology department, and yet the university seems to fail to utilise them when addressing these issues. She, like many others, also stressed the importance of liaising with the Students Union when it comes to these areas in order to improve understanding of how events, such as drink spiking, affect the student population and how these can best be tackled for the safety of our community.

And yet, despite all the resources available to them, Durham seems to buy into the culturally pervasive idea that women should change their own behaviour to counteract how other people behave towards them. They are not better than the Metropolitan police telling women to simply “flag down a bus” if they feel in danger or to question a police officer’s authority to arrest you. Instead of giving women yet another way for the blame to be placed on them, Durham should be focusing their efforts on addressing misogynistic behaviour and providing students with actual guidance and advice on how to tell if a drink is spiked, what to do if you think that you or a friend has been a victim of drink spiking and what university services are available to those affected. The idea that a victim will simply phone the police and all will be resolved is simplistic – it doesn’t offer support for those suffering with the aftermath of spiking, nor does it provide students with actual advice on some of the ways which can be used to prevent it. Ultimately, it absolves any blame from the perpetrator – something which is done far too often when we talk about women’s safety.