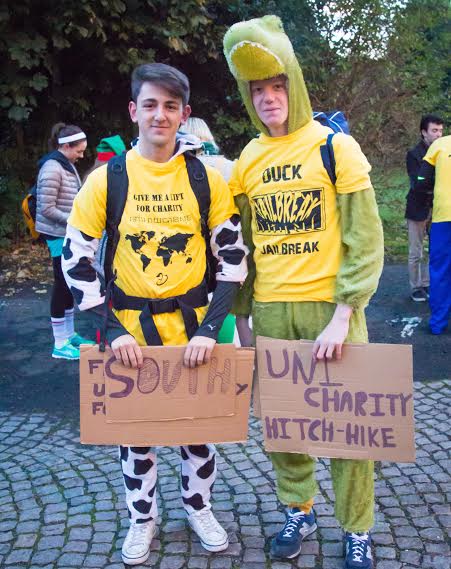 DUCK, which beat submissions from across the UK, has raised and donated in excess of £200,000 for charities locally, nationally, and internationally, and students have given up countless hours volunteering. The award is, however, judged on more than donations, with another crucial aspect of the judging criteria being the work and drive that goes into the fundraising, along with the long-term impact and sustainability of the group.

Jordan Riley, the incoming DUCK chair for 2014/15, says she is “absolutely delighted” with the recognition, going on to say: “We have worked over the last 12 months to make DUCK even better. Last year we introduced the DUCK strategy, to ensure we have a clear direction, to help with long term sustainability, whilst still continuing on with the fantastic work we have always done to raise money for various charitable causes.”

DUCK organises a range of fundraising events each year including challenges, such as Tough Guy, endurance events, such as the Paris Marathon, and unusual events such as the Cathedral sleep-out. DUCK also extend their fundraising efforts into the local community.

Jordan comments: “We try to offer a varied timetable of fundraising activities each term, giving all students the opportunity to participate in fundraising activities, no matter what their experience might be. We also try to organise events that the local community can get involved with such as our annual duck race, which sees 10,000 rubber ducks being tipped into the river from Elvet Bridge. Local residents, visitors and students can sponsor a duck for £1, with the winner of the race receiving a prize of £500.”

DUCK was set up in the 1960s, originally organising a single, week-long event, but have come a long way since then, now operating the whole year round. This year’s award is not the only recognition that DUCK has received in recent years. In 2011–12, DUCK were named the Best Fundraising Team at the Institute of Fundraising’s National Awards and in 2013 DUCK won the award for Outreach at the first National RAG (Raise and Give) Awards.

To find out more about DUCK, including the work they do and how to get involved, their website can be found at: http://www.durhamduck.org.uk/