It was during a recent conversation that the idea for this article came to me. Sat with me in the Purple Radio lounge was Hugo Nichols, a fellow student and a one-time Wimbledon ball boy. Competing to be heard over the cheers of Station Manager Adrian Waddelove, who couldn’t contain his glee at Manchester United’s triumph over Manchester City, Hugo told the tale of a school trip to see the Washington Wizards and described the overload of spectacle.

It’s the story of many basketball games: cheerleaders, half-time fan contests, marching bands and arena DJs contribute to a medley of entertainment besides the sporting action, and can go a long way to drawing out a 48-minute match into a three-hour sensory extravaganza. Not to mention up to 14 tactical timeouts, pauses which are more irritating than exciting. 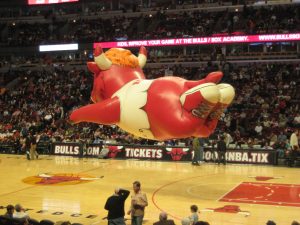 Image by Tony. Available on flickr under Creative Commons 2.0 licence

As seen in football with the complaints against VAR’s laboured process, English sports fans just don’t tolerate such long pauses.

The question begs as to what cultural differences decide that Basketball (or any popular American sport) should sink in the UK but swim in America. Why is it that some American universities can draw average crowds of 20000 to their basketball games, whereas basketball might only feature in a few Year 8 PE lessons here? How is it that LeBron James can make $134.9 million this season in America, while many professional players here make less than £30,000 per year? Why can’t America unleash its favourite sports on England?

Firstly, there seems to be a greater inclination towards theatricality in American sport. This is perhaps best seen in other sports, such as wrestling. Behind WWE, there is a huge team of script writers who pitch fights, narratives and speech, with fans turning up fully aware that they are watching what is, in fact, a show- an event with a pre-determined outcome. Of course, this doesn’t detract from the sheer horror and amazement the sport can produce when its deadliest moves are pulled off. Scripted or not, any move called a ‘gutwrench powerbomb’- which essentially consists of fighters being slammed onto their backs from head height- is bound to thrill.

And there is a version of scripting in basketball. Admittedly, it’s not as strict as in the WWE, and is only detectable when used over time, but it exists all the same: the idea of playbooks. A playbook is a collection of strategies that teams might revert to whether on the offence or defence. It’s also a common beast in American football games.

Upon first glance, it might sound rather common- don’t British football teams, for instance, have set strategies? What’s the difference? The difference is that Super Bowl-winning American football coaches like Al Saunders are known to have compiled playbooks of 800 pages for players to study intensely- just when they thought they’d escaped the world of textbooks by landing an NFL (National Football League) contract! Coaches at junior levels replicate this (though not so extremely), offering a more serious attitude than in grassroots sports in England. So, this could be a second observation: sport in America is treated more as a science or a study, with this attitude catering to a different set of sports.

This would explain the system of entry into professional American sporting leagues. Unlike with English sports, where talented plays are scouted by clubs at a young age and grow in the sheltered confines of a team’s academy, the major American sports use a draft. This means that players usually attend college (university) for at least a year, often on sports scholarships, balancing studies alongside their pursuit of a place in the world spotlight. Zion Williamson, the first pick in the 2019 NBA (National Basketball Association) draft, completed a year at Duke University before signing for the New Orleans Pelicans. Young American sportspeople depend heavily on their coaching and opportunities within the educational system.

One of the main reasons that basketball has not taken off in the UK is because opportunities for progression are scarce. Though 175,000 people between the ages of 14 and 25 play each week- as many as cricket and golf combined- many of these are concentrated in small areas; 18% of Britain’s basketball clubs are jammed in the most deprived neighbourhoods of the nation. But these talented players have hardly anywhere to go- the British Basketball League has just 12 teams, much smaller than other European leagues and the NBA.

In 2018, the national teams for men and women were on the verge of being disbanded due to a lack of funding. They are caught in the vortex of a vicious cycle. A lack of success on the international stage leads to a lack of funding, which reduces the quality of the infrastructure of the game right down to a grassroots level, which affects the progression of the next generation of players. This is another factor restricting basketball in the UK.

It might be one of the biggest participation sports in the country, but basketball is very much on the fringes of the British conscience. In its most excellent moments, it is a great sport to watch and to play. Not only does it boast numerous cardiovascular benefits, but it has the magic to dazzle when somebody does something with their hands you didn’t even know was possible!

There will always be constraints on its popularity; its natural favour of taller players can repel those of bite-sized height (like myself) and even ruin career hopes. The average player height for the 2019/20 NBA season is 6’6”! Any hopes of basketball growing as big here (mind the pun!) as it has in America are slim for now. But with more publicity, funding and encouragement, basketball, like any sport prevalent in America, clearly has the potential to be popular. Away with the cultural differences- all it takes is effort. The demand is there.

Featured image by Hobbies on a Budget. Available on flickr under Creative Commons 2.0 licence