If Liverpool remain undefeated until April 11, they will reach 50 league games unbeaten and topple the record set by Arsenal’s Invincibles. Among the clashes facing them are trips to the Etihad and Goodison Park and, on what would be a historic April day, a home tie against Aston Villa. And yet, despite the awe such a record would deserve, it would pale in comparison to the record set by Steaua București between 1986 and 1989, when Romania’s greatest club went 104 league games- 119 domestic games in total, winning 103- without knowing defeat.

During this period, Steaua won five consecutive Divizia A titles and four Cupa României finals. Aside from becoming the first Romanian side to win five successive league titles since the 1920s, a much bigger honour awaited: in 1986, Emerich Jemei’s side beat Barcelona to become the first Eastern European club to win the European Cup.

To the outside world, and many of the 70000 fans there in Seville, Steaua were underdogs. Romanian clubs only had Romanian players, and Romanian players were hardly considered the best- the national side had only qualified for the World Cup once in the previous 48 years. Meanwhile, Barcelona had entered for the tournament as reigning La Liga champions, and boasted some of Europe’s leading talents like Bernd Schuster, Victor Muñoz and José Roman Alexanko.

“To the outside world, and many of the 70000 fans there in Seville, Steaua were underdogs.”

A suffocating night stifled the energy. Frustration boiled. Tensions rose. Schuster stormed out of the ground after being substituted by Terry Venables. The game plodded on, Steaua clinging to a draw, first through regulation time and then through extra time. The whistle went. Penalties were on.

What happened next reduced the Romanian commentator to a broken record, incanting one word on repeat. “Extraordinar. Extraordinar”. Extraordinar with the ‘ar’ rolled out in disbelief.

None of the first five penalties went in. After his penalty was saved, Steaua midfielder László Bölöni blasted in the rebound in exasperation. And still the goalkeepers were impermeable, until the sixth penalty of the night, when besieged by whistles and the buzzing of horns, Marius Lăcătus kept his cool to lace a piledriver thundering in off the bar. The striker fisted the air triumphantly. Minutes later, Steaua won the shootout as Helmuth Duckadam saved Barcelona’s fourth penalty to secure a 2-0 victory, earning his club a place in footballing history. 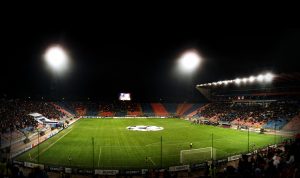 It was a crowning glory which came relatively early in Steaua’s most prosperous European period. The coming years would see Steaua, led by icons like Gheorghe Hagi, win the European Super Cup and reach another European Cup final. On their own turf, their domination sprawled as they averaged over three goals per game. Baring their teeth from behind the Iron Curtain, the kings of the Romanian jungle felt invincible.

They were not invincible.

The ultimate footballing nightmare, the ultimate exploder of your blood vessels, is having your arch enemies spoil your party. For Steaua, this fate knocked on 9 September 1989 when loathed rivals Dinamo București rolled up at Steaua’s ground, Ghencea. Dinamo were the next-best side in Romania at the time, having finished 2nd in the league thrice in a row, but had not won an Eternal Derby game since 1986.

Yet times were changing. Dinamo won the game 3-0, going on to clinch the title by a point, and Steaua didn’t reclaim the league until 1993. The Romanian Revolution of 1989 saw the execution of Communist President Nicolae Ceaușescu, which in turn led to the country becoming a free open market, which in turn allowed stars like Hagi and Dan Petrescu to leave for other European clubs. As club President Valentin Ceaușescu was the son of Romanian President Nicolae, he had until now enjoyed unfettered power, being able to pinch players without paying transfer fees and shrug off match fixing accusations. 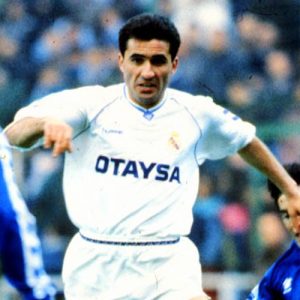 This supremacy was over. Though Steaua regained their grip on the league and won six successive titles between 1993 and 1998, something wasn’t quite the same. Since a 4-0 defeat in the 1989 final to AC Milan, Steaua have not made it beyond the last 16 of the European Cup or the Champions League, and the last time they even made it that far was in 1994.

Nowadays, the club are mired in dire straits. In 2003, business tycoon George Becali took over the club, but seemingly secured no paperwork to show for it. In a bold move, Becali made the club’s governing company public. Effectively, this brought an end to Steaua’s tie with the Romanian army, the very group which had founded the club back in 1947. The club which had been nicknamed ‘The Soldiers’ would henceforth struggle to soldier on through controversy.

“Nowadays, the club are mired in dire straits.”

In 2011, disaster struck. After Becali launched a dispute with the army over the rent he had to pay for Ghencea, the Ministry of Defence demanded that Becali present ownership paperwork, which he could not do. The club was sued, and a schism ensued; the army retained the club’s history, badge, colours and name; Becali declared that he would have no trouble with leaving the stadium behind and, in December 2014, the Supreme Court stripped Becali’s club of its former identity.

For fans, a club that was once a source of unity and pride is now splitting them apart. On 7 December 2014, the club played a home game without a name. Though 11 players beat CSM Studențesc Iași 1-0, they were not legally playing for Steaua- the scoreboard just said that the ‘hosts’ had won.

Two separate versions of the club now exist. The one owned by Becali, now named Fotbal Club FCSB, plays to this day in Liga I, the top tier. They finished second last season and are still recognised by UEFA and Liga I’s governing body as the essential Steaua București, despite the protestations of the Romanian court.

This, however, is not the opinion of the purists. They would say that the true club is the one that currently plies its trade in the ignominy of Romania’s fourth tier, CSA Steaua București. It is the shell of the club that once was and is the official owner of Steaua’s badge, colours and history. In 2018, when they played city rivals Rapid București, who also suffered a fall from grace to Liga IV, 36000 fans turned up to show their support.

However, failure to get promoted last season incited revulsion from the Steaua faithful, with ultras invading the pitch and ripping the shirts off the players. No sympathy for the squad who had qualified for the promotion playoffs with a goal difference of 191. This club is the cream of the Romanian cream and the fans don’t want to lounge around in the gardens of complacency.

The tale is, if anything, a reminder of football’s unforgiving cyclicality. Once upon a time, there was a night when Huddersfield were celebrating three successive First Division titles, but look at them now. Though Liverpool’s football is imaginative, dynamic and, occasionally, downright jaw-dropping, Mother Time doesn’t care. One day, they will no longer be a Premier League club. I suppose Liverpool fans like myself will just have to soak up every moment of this run while it lasts!