As two new editors take charge of the Sports section, we’d like to share with you two intriguing sports we’ve recently come across. The first is an ancient sport of disputed origins which is still played in Central Asia today. The other is a newly formed sport but is based off a game which has been played for centuries. What we’d like to show with our two examples is that whoever you are, wherever you are, there is a sport for you somewhere, and that you can be as passionate for that sport as you like without ever caring what anyone else thinks.

Buzkashi literally means “goat pulling” and has been described as “what polo might look like if it was played in prison.” This is an understatement. You’ll soon understand why.

Its origins are obscure. Some say it was born among Chinese and Mongolian nomads possibly as early as the 10th century, but other fables have it that it emerged as a formal sport from raids in Afghanistan, where rival tribes would steal goats off each other. Buzkashi is a sport which is still popular today, being the national sport of Afghanistan.

The rules are loosely defined, with many variations across different cultures, but in general, the aim of the game is for riders on horseback to haul a dead calf or goat into a marked scoring area. It is almost a lawless game; the official rules are only observed in Kabul, Afghanistan’s capital. Beyond there, it is anybody’s game.

Due to the volatile and unpredictable nature of the sport, it is extremely dangerous. Often games have been contested with hundreds of riders on each side, all whipping the opposition players to gain an advantage. The fact that many games are played without boundaries doesn’t help, either- games regularly overspill onto surrounding roads, frustrating many an unsuspecting commuter who set off thinking they could have a peaceful drive to work. Games can drag on for multiple days (presumably with time allocated for sleep), sprawling through the hours until everybody gets too tired… or bruised. The most disturbing fact, however, is that spectators and fallen riders are regularly trampled. With hooves clomping on the rugged terrain like hammers falling from the sky, getting caught in the maelstrom of dust beneath the action can often be a fatal misfortune.

Yet the violence of the game does little to detract from the popularity of the sport. Indeed, it enhances it, highlighting the courage of those who dare to try their luck. The most skilled buzkashi players are revered, holding legendary status and able make a living out of the game thanks to sponsorship from wealthy fans. Horses are especially reared and primed for the sport by breeders. Despite this, buzkashi has seen a tortured modern history. When the Taliban ruled the country, they banned the sport, branding it as immoral, and put the suddenly unoccupied horses to a much more depraved task than goat dragging. The horses were used in warfare. 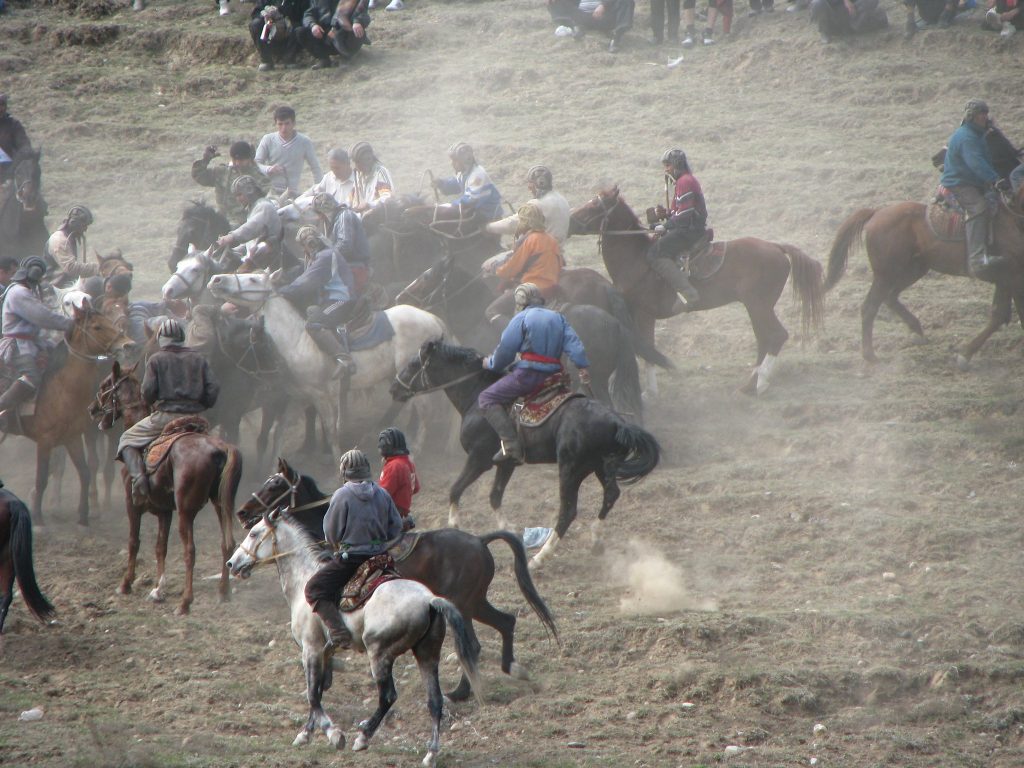 Yet the sport has risen from the grave of Taliban rule since 2001. As their forefathers through the centuries will have squabbled over which goat belonged to who, so modern stars compete with equal ferocity. And the time-honoured phenomenon is not just limited to Afghanistan. In Kazakhstan, there are dozens of professional teams.

It is difficult to express the mayhem and fervour of the game in words. If you are interested, I strongly encourage you to watch clips of this game to your heart’s content (uploaders spare us of the goriest parts). But I also issue a cliché plea. For your own safety: please do not try this game at home.

The game we all played at school has now been revolutionised into a fast paced, adrenaline filled sport which garners over 350 million views online. Founded in 2011 by brothers Christian and Damien Devaux, World Chase Tag (WCT) has found increasing popularity every year. The premise takes tag, a game we all know and love, and inserts it into ‘The Quad’, a 12cm2 course with a mix of obstacles that make it look like a futuristic jungle gym. Two players then step into the square, the goal of the ‘chaser’ being to catch the ‘evader’ within 20 seconds, or the evading team scores a point. Usually containing 16 rounds, the objective is to get more successful evades than the other team. The pinnacle of WCT is the annual tournament held every year, last year’s being the fourth iteration of the competition. Although the majority of its viewer base comes from YouTube, WCT has now been broadcast on the BBC, ESPN as well as Fox Sports, a clear indication that the sport is on the rise. With teams across 5 continents, the sport has a clear international appeal, tag being an almost universal game.

But what’s the appeal you ask? Firstly, it’s easy and accessible. The rules are simple, and all matches are available on YouTube, only last around 10 minutes. This makes it perfect to kill some time if you’re stuck around waiting. But more impressive than that is the sport itself. The rounds being limited to 20 seconds give each chase a unique tension, allowing you to engross yourself in the spectacle without it becoming exhausting. The sport also boasts some of the best names in free running and parkour, meaning the standard of competition is incredibly high. For example, any James Bond fans will remember this iconic chase through a building site in Casino Royale:

In that clip is Sébastien Foucan, considered by many to be one of the founders of parkour. He is one of the leading members of Blacklist, one of the semi-finalists of last year’s tournament. WCT attracts many of the other leading figures in parkour to compete, so that every match has at least one or two incredible feats of agility. If you’re looking for a team to support, there were 3 English teams in the quarter finals of the most recent tournament, so that’s a good place to start. A game which has gone from the playground to filling out stadiums, World Chase Tag is perfect relief to enjoy when stressed out by work. If I still haven’t convinced you, here are some highlights from last year’s tournament:

And there you have it. Two completely different sports from opposite ends of the earth which we hope we’ve given enough reasons for you to enjoy. Let us know if you have any sports you’d like to cover for us.