The best and worst of cricket: The Ashes from the sidelines 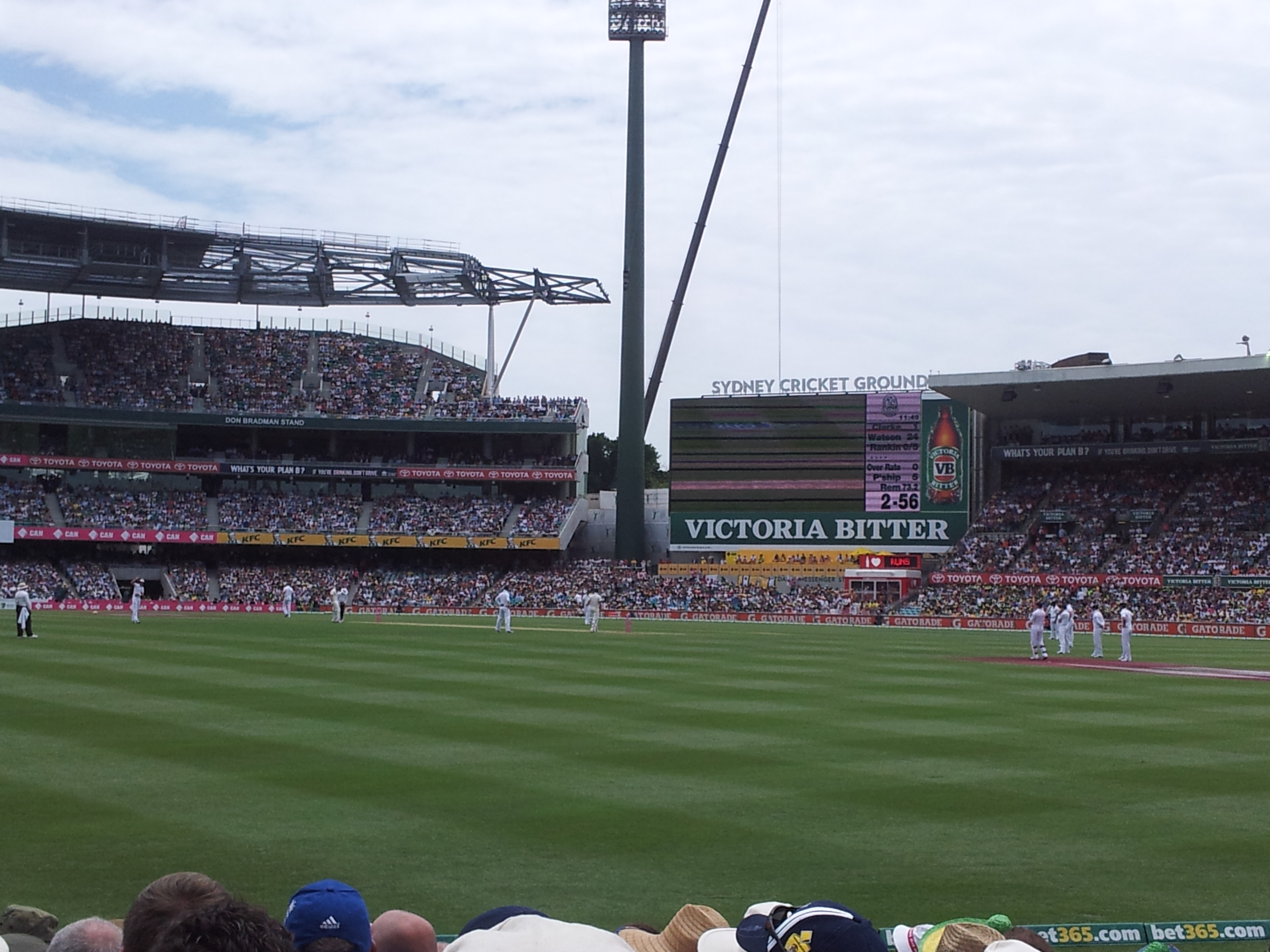 As play drew to a close on the first day of the Sydney Test, not a soul got up to leave early. England had begun the day well after choosing to field, but a classy 75 from Brad Haddin had helped Australia recover from 97–5 just after lunch to a respectable 326 all out. That left England with just six overs to face, opening with captain Alastair Cook – who had scored 189 on the same ground three years earlier – and his partner Michael Carberry.

In the series in England five months earlier, those six overs would easily have been survived – but then the English batsmen had not had to face Mitchell Johnson during the English summer. Steaming in from the Randwick End, Johnson bowled the six fastest deliveries of the day in his first over. Cook betrayed his nerves in Johnson’s second over by haring down the other end to get off strike, leaving the much less experienced Carberry exposed. Two balls later Carberry was out, caught by Nathan Lyon at leg slip, and the ground went delirious.

It was the story of the series. But it was also a wonderful advertisement for Test cricket. James Anderson came in as nightwatchman for the last three and a half overs. Willed on by the Australian fans, Johnson and Ryan Harris seemed capable of taking a wicket with every ball, while every forward defensive from Anderson earned a momentous cheer from the travelling fans. The day ended with England 8–1 from a six-over spell, much more thrilling than anything one-day or Twenty20 cricket can ever produce.

The appeal of the five-day-game (or thereabouts, depending on England’s batting) may seem strange to outsiders but it is what underpins cricket. At Melbourne in the previous Test, the Boxing Day crowd of 91,112 was a world record for any Test match, anywhere. The one-day international there between the same sides on 12 January managed less than half that. A large portion of that world record crowd was made up of England fans, who had parted with large sums of money to fly to Australia and buy tickets to every day of the Test. The Ashes may be an exception, but even in other parts of the world it is Test matches which draw England fans in.

The large English contingent made for a superb, if boisterous atmosphere. Many parts of the Melbourne Cricket Ground (MCG) and Sydney Cricket Ground (SCG) lie directly in the sun, and by the end of a seven-hour day particularly refreshed supporters might find themselves ejected. But these occasional scuffles are rarely provoked by outright hostility between fans. At football matches with large numbers of away fans, opposing supporters are kept tightly segregated once inside the stadium. The visiting fans are usually kept penned in for up to half an hour after the final whistle, to prevent clashes between supporters as they leave the stadium and pile onto trains and buses. Any other approach would be downright irresponsible. At the MCG and SCG, opposing fans freely mingle and chat outside, join the same queues and sometimes sit side by side.

The Barmy Army, which is loosely defined but takes up whole sections of the ground, was excellent throughout and applauded the Australian players at Sydney once the 5–0 whitewash had been sealed. England fans too took a full part in Jane McGrath day on the third day at Sydney, turning out in pink to support the fight against breast cancer. The Australian fans too are wonderfully inventive. The second day of every Sydney Test sees hundreds of Richie Benaud impersonators, complete with imitation Channel Nine microphones, sit together in one part of the ground. During that day they were visited by Shane Warne, Glenn McGrath and former Australian Prime Minister Bob Hawke.

Less appealing is the abuse suffered by players, from the crowd and from opponents. Stuart Broad paid dearly for his decision to take advantage of a gross umpiring error in Nottingham last July, an error which arguably cost Australia victory in that Test. From Australian players and a minority – that must be stressed – of Aussie supporters, Broad received constant and profane sledging. Upon his second-innings dismissal at Melbourne a group of home fans were more concerned to send him off with one last stream of abuse than to applaud Nathan Lyon on his hundredth Test wicket. Broad took it all in his stride and ended up as England’s best player of the series, but the early departure of Jonathan Trott from the tour indicates the effect such an atmosphere can have on a player. International sports players have to expect criticism but a line must be drawn at personal abuse.

A minority of England fans can behave just as badly. Three years ago certain England fans delighted in reminding a struggling Mitchell Johnson where he was bowling it. In this series, a revitalised Johnson – who ended with 37 wickets and the Man of the Series award – became Australia’s pantomime villain, simply for being good, much like Ricky Ponting in 2009. He too took it all in good humour. Indeed, Johnson’s personal triumph won the admiration of a number of England fans: a well-known Test match commentator won a round of applause at a fans’ dinner in Sydney for praising Johnson’s victory over the hecklers.

Still, these things do not need to overshadow the series, and should certainly not be seen as excuses for England’s dire batting display, the worst by England in living memory. For the travelling fans, just being there was wonderful, never mind the result. There were a few moments to celebrate – the emergence into Test cricket of Durham’s Ben Stokes, scorer of England’s only century of the series and taker of 6–99 in the first innings at Sydney; and a glorious second day in Melbourne when Australia collapsed from a fairly comfortable 110–3 to 164–9 by close of play. Even in a hopeless cause at Sydney, every boundary from Stokes and Broad near the end earned rousing cheers from the Barmy Army.

Broad in fact was so impressive that there is a strong case for promoting him to the captaincy, and relieving Cook of a duty which at first seemed to enhance his batting but has lately diminished it. At Sydney he looked broken, completely without ideas in the field as Haddin again ruined a promising England start, and then visibly terrified of Johnson in the last overs of the first day. A man who scored 766 runs in the 2010/11 series cannot have lost the ability to bat in three years. For Cook and for the whole team, the root of defeat was in the mind. But in spite of England’s batting fiasco, visiting Australia for an Ashes series is an unforgettable experience for a cricket supporter. For England and Australia at least, the Ashes remains the best of cricket.