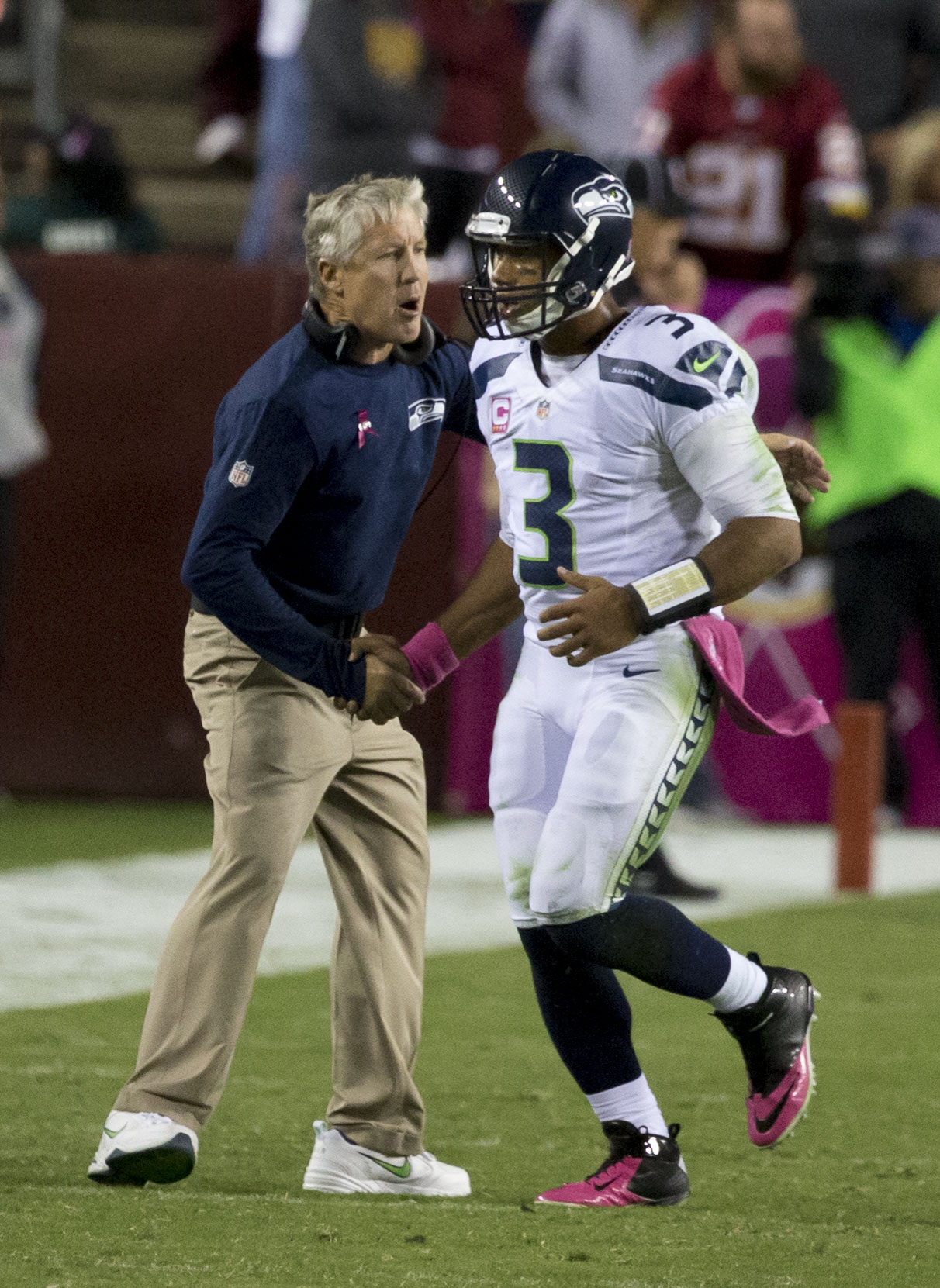 Every Super Bowl brings about a wave of hype and buzz that takes the world’s media by storm. It’s probably the only time, aside from begrudging coverage during the London ‘International Series’, that you’ll find articles on American football in the back pages of the UK broadsheets. But this country is waking up to the NFL, a notion reflected in the number of British websites covering the game as well as Sky Sports’ decision to convert one of its channels into a 24/7 gridiron hub broadcasting documentaries, classic games, and streams of the NFL Network. Across the pond, today’s game between the New England Patriots and the Seattle Seahawks has been at the forefront of national consciousness for the past couple of weeks, only intensifying as kick-off at the University of Phoenix stadium (home of the Arizona Cardinals) in Glendale, Arizona gets ever closer.

The anticipation seems that much more intense this year; there’s good reason for that. New England and Seattle have legitimately been the two best teams in football this season and it’s no secret that they don’t particularly like each other. The match-ups are tantalising, the narratives alluring. The quarterbacks could not be more contrasting. Neither could the head coaches. Pundits and celebrity fans alike can’t pick a side, umming and ahhing between the Patriots’ chessboard offense and the Seahawks’ monstrous, suffocating defense. As self-indulgently fun as it would be to write a thesis micro-examining and scrutinising the many factors and features of this contest, in the interests of practicality and reputation it would be more prudent to collate and run through the five most critical.

What will Bill Belichick’s game-plan be?

New England face the league’s best rushing offence and one of the statistically best defences in history that presents a catch-22 situation, a choice between avoiding an elite front seven or an even more elite defensive backfield. But if there’s ever been a coach who revels in this kind of head-scratching, chin-stroking tactical conundrum then it’s Patriots head coach Bill Belichick. He’s forged a Hall of Fame career , finding the smallest weaknesses in opposition teams and exploiting them with an arguably weaker roster. The Patriots will likely look to attack Seattle’s relative weaknesses by trying to get tight-end Rob Gronkowski in mismatches against smaller defenders or running wrecking-ball back LeGarrette Blount right up the middle of the Seahawks’ defensive line. How the tactical side of the game transpires could have a huge hand in the final score.

Which Quarterback will outperform the other?

As mentioned, the opposing QBs really could not be more polarising. On the one hand you have the Patriots’ Tom Brady, a thirty-seven year-old with three Super Bowl rings and a valid claim to being the greatest ever. Tall, elegant, glamorous (his attractiveness is openly expounded by the media and he’s married to Gisele Bundchen) – he is surgical poise and precision personified. Under center for the shots for Seattle is the pocket-rocket Russell Wilson, who in his first three years in the league has won one Super Bowl and is about to play in another, with a game predicated on dynamism and explosiveness. Where the two are similar is how they play the game. Both are renowned for being transcendent competitors with the mental fortitude to drive their teams on no matter the score. Indeed, the two have orchestrated comebacks from behind this very post-season. On Sunday, Brady undoubtedly has the tougher task of finding ways to beat Seattle’s incredible defense; but Wilson will also have his hands full against the Patriots’ well-coached and tactically sound unit. You need points to win. Most Super Bowls come down to execution, and that starts with the quarterback playing well – it will be fascinating to see who can best negotiate and adapt to what’s going on in front of them.

Will New England be able to stop Beast-Mode and the Seattle’s running game?

Even though Marshawn Lynch is only here so he doesn’t get fined, the Seahawks’ running back has been imperative to their journey to the Super Bowl. Few teams have been successful in slowing down arguably the league’s best running-back. The responsibility of containing lynch will likely lie primarily with line-backers Jamie Collins and Donta Hightower, who certainly have the physical tools to give it a fair crack. But it will require a near perfect performance from the whole of the Patriots’ front seven to stop Lynch from entering ‘Beast-Mode’ and ripping off a huge night’s rushing.

Can Rob Gronkowski be contained?

In an otherwise flawless defense, Seattle have had some trouble against tight-ends – they’re consistently ranked in the top three for defensive stats apart from tight-end receptions and touchdowns. It just so happens that New England boasts the best tight-end in the NFL. Gronkowski is a 6’7’’, 120kg man-child who shrugs off defensive-backs like they’re schoolboys. In another twist of fate, the Seahawks have the league’s biggest and hardest hitting strong-safety in Kam Chancellor as well as fast, agile line-backers. It’s likely that head coach Pete Carroll will use a combination of Chancellor and either Bobby Wagner or KJ Wright to ‘spy’ Brady’s favourite target without over committing to him and therefore opening up holes elsewhere. The Seahawks will probably be content to let Gronk make catches for short yardage without allowing him to make his trademark game-breaking plays. That’s assuming that Gronk doesn’t just take over the game of course, which he’s more than capable of doing. It’s a lip smacking match-up, and hopefully the space-time continuum won’t implode after he and Chancellor collide at full-speed.

Will Seattle’s pass-rush prove too much for New England?

If there is a singular factor upon which the outcome of this game could hang, it’s this one. The playbook on Brady has always maintained that pressure from pass-rushers can coax Brady into making rushed throws he doesn’t want to make and also disrupt the timing and slick execution of the Patriots’ offence, which is what it’s centred upon. Though it developed into a fairly reliable unit as the season progressed, the Patriots’ offensive line just isn’t as good as it has been for much of the last fourteen years – the two heavy losses that New England endured at the very start of the schedule resulted from a cobbled together line playing like deer in the headlights, rendering Brady unable to operate effectively. Seattle has a very good pass-rush. The strength of New England’s line lies in exterior tackles Nate Solder and Sebastien Völlmer. The Seahawks might decide to move usual defensive end Michael Bennett, who’s been phenomenal all season, inside to attack the Patriots’ young, inexperienced guards. That would also enable the Seahawks to tack a line-backer onto the end of the defensive line to amp up the speed of the pass-rush. On paper, Seattle has the advantage, but in the divisional round New England faced the superior Baltimore unit and fared well enough to allow Brady to complete 34 passes out of 51 attempts and finish with a QBR (quarterback rating) of 99.3 – in other words, awesome. This critical battleground echoes the game as a whole – it’s impossible to pick a side with any confidence.

As tight as a contest as this is, the edge has to be given to the Seattle Seahawks. The consensus is that they just have more of a cushion to make errors or underperform – if New England doesn’t execute incredibly well, on either side of the ball, then the Seahawks have the personnel to capitalise. That said, the Patriots are brilliantly coached and will have practiced meticulously for the last fortnight. Moreover, if you had to pick a quarterback to play in a high pressure situation, it would probably be Tom Brady.

So, what happens when the unstoppable force of the Brady-Belichick Patriots meets the immovable Seattle defense? Who knows? – isn’t that the point? In the words of Pete Carroll, ‘if you love football you’re jacked up right now!’. Game on!