A small boy is waving a fistful of sweaty Jellybabies in my direction but my mouth is already full of a ‘Banana Fudge’ energy bar that is neither banana nor fudge. I have asked myself countless times over the last three hours what on earth I was thinking when I cheerfully (read drunkenly) sent off my application to the Greater Manchester Marathon. In my exhausted state, I think I see a six foot scarecrow grab the sweets, and as the Tin Man passes me, I realise I’m not hallucinating. We’re not in Kansas anymore, Toto.

A quick rewind. Last year, the vague idea of running a marathon began to rear its head. I wanted to do something for the mental health charity Mind, and as someone who likes a run or gym session every so often, a marathon seemed a sensible choice. Obviously, a marathon is never a sensible choice, but on April 8th 2018, I somehow got round the 26.2 miles and now consider myself to be something of an expert. Much like your mate who nearly did psychology GCSE and can now diagnose you with any and all childhood trauma. Below is a detailed, not at all dramatic account of my training and how you can learn from my equally horrendous and incredible experience. 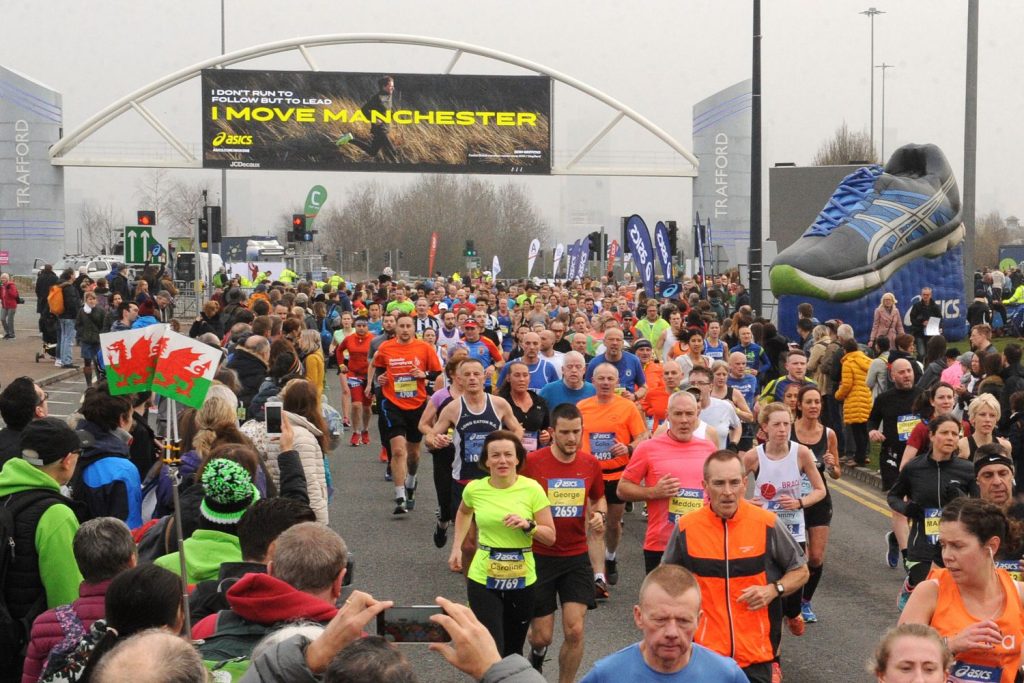 First, a serious note. If you have any medical problems, mental or physical, that might cause you issues when training for a marathon, please consult a professional. I was incredibly lucky to have a fantastic personal trainer who got me through but the experience was far more gruelling than I had expected.

But if you’re all good to go, then I would definitely recommend having a drink before you sign up. Not only are you egged on by your mates but you also massively overestimate your running ability. Why do a half when you can do a full? Why tell the organisers you’re aiming for five hours when you could say four? Once you wake up the next morning and see the aftermath, your drunken self has already blackmailed your sober self into aiming high. Some might say too high – ignore them and go and panic buy some new trainers.

Before last October, I hadn’t run much more than 10km. I play hockey and I go to the gym a fair bit, but I quickly discovered that I knew literally nothing about running. How far to run? When to run? Where to run? HOW to run? I did the sensible thing and googled running plans, found one that worked and followed it to the letter. Unless it was raining. Or I was busy. Then about two months into training I realised that a marathon is quite a long way and that I really did need to get a shift on.

I trained in Durham. Yep. I ran up and down hill after hill after hill. There are a lot of hills in Durham and I can safely say I ran up all of them. But even though every hilly run was horrific I cannot recommend it enough; once I got to the actual race and was faced with only one decent incline I felt like I was flying. Or at the very least, not dying.

The one piece of advice I received that I clung onto throughout training was that if I could do a half marathon by the end of January, I could run a full one in April. So I dutifully went and signed myself up for the Essar Four Villages Marathon on the 21st January. DO NOT DO THIS. This was a bad move. I’ll give you two moments that I feel will explain my less than favourable memories of the day. The first was when at mile three, a flake of snow hit my face, and then didn’t stop hitting my face until I got to the finish line. I wore three jumpers that day and at no point around the 13.1 miles was I tempted to take any of them off, even when the wind chill got above -9 degrees. In short – baby, it was cold outside. The second moment was when I was trying to hold a water bottle and my phone in one hand whilst unwrapping one of those bloody banana fudge energy bars and running through a particularly cold puddle. I glanced down to see my shoe lace had become untied and seconds later, saw myself step on that lace in an almost out of body experience. The road flew up towards me, the energy bar was flung into a bush and then there was a heart wrenching splash as my phone lands in the slush puddle. I was food-less, phone-less and covered in snow with another five miles to go. It was a low moment.

The training got worse before it got better. Remember the Beast from the East? I spent two hours of my life running in that. One memorable run involved a head first collision with a (stationary) car, and on another I collapsed in front of my house until my mum came and revived me with the promise of a bath and some food. I had several nature wees, a couple of arguments with some catcalling neanderthals and a run-in with a Chihuahua. But at the end of every run, the sense of achievement was huge and I was that bit closer to my goal. It was horribly addictive but also fantastically fun and crucially meant when the big day came, although I was so nervous I thought I might have to use every portaloo provided, I knew that I would get to that finish line.

6am. My clothes were laid out on the floor. A bowl of peanut butter and banana porridge awaited me downstairs. It was race day.

My number one tip for getting to your race; tell your family you need to be there roughly three hours before it starts. This allows for all of the following, which I selflessly lived through so you don’t have to:

Leaving the house SIGNIFICANTLY later than planned, because no one other than the person actually running the race is moving with any sense of urgency, apart from my mum who was urgently tidying. Why was she doing that? We’ll never know, but it was actually less unhelpful than my dad deciding ten minutes after we should have left that getting dressed might be good. Families, eh?

Road diversions. Because of the race you’re in. I mean really…

Public transport being, well, public transport. The tram is a wonderful invention but on a day where it was rammed with runners, all discussing their ‘race approach’ (my ‘race approach’ was starting and finishing on the same day) and emitting a delicious fog of deep heat and sweat, I have never resented the perpetual delays more.

Nervous weeing. I visited a portable loo roughly every hundred yards on my way to the start line. And so did the other 12,000 runners, which meant that during the ten second count down I was still washing my hands whilst trying to stretch and wave my parents goodbye. At mile 7 – before the chafing

The race itself is like nothing I have ever experienced, mainly because of the chafing. Dear God, for your own sake, vaseline up. My thighs were bleeding at mile eight and they did not stop for several hours, by which time the rest of my body had joined in the fun. If it wasn’t chafing, it was cramp, or a stitch, or just this all-over ache that intensified with every step. For the last eight miles, the only thing preventing me from stopping was that I wouldn’t be able to get started again.

But whilst the three and a bit hours I spent running were the most painful of my life, they were also the most incredible. The good people of Manchester came out in their hundreds to offer food, drink and the greatest display of support I could have wished for. Kids offered their sticky hands for high fives whilst parents thrust water bottles at staggering runners. The second best moment of the entire day was when I saw a tiny child dressed as Superman pat a struggling athlete on the back and say ‘you can have my super power if you need it.’

The best moment of the day, however, was yet to come. A couple of minutes after I crossed the finish line, exhausted but elated, I collapsed outside a marquee that was promising immediate recovery with ice baths and protein powder when all I really wanted was my bed and a banana sandwich. As I waited for my parents, an aggressively energetic woman announced over the tannoy that a man had just broken the world record for completing a marathon in flip-flops and a gleeful thrill came over me as I realised how much more painful his feet would be for mine. So if you take away anything from my experience, make it that you can run a marathon however you want, but DO NOT do it in flip-flops.

You can still help me raise money for the mental health charity Mind by donating anything you can here: www.justgiving.com/fundraising/lauren-woodhead2?utm_source