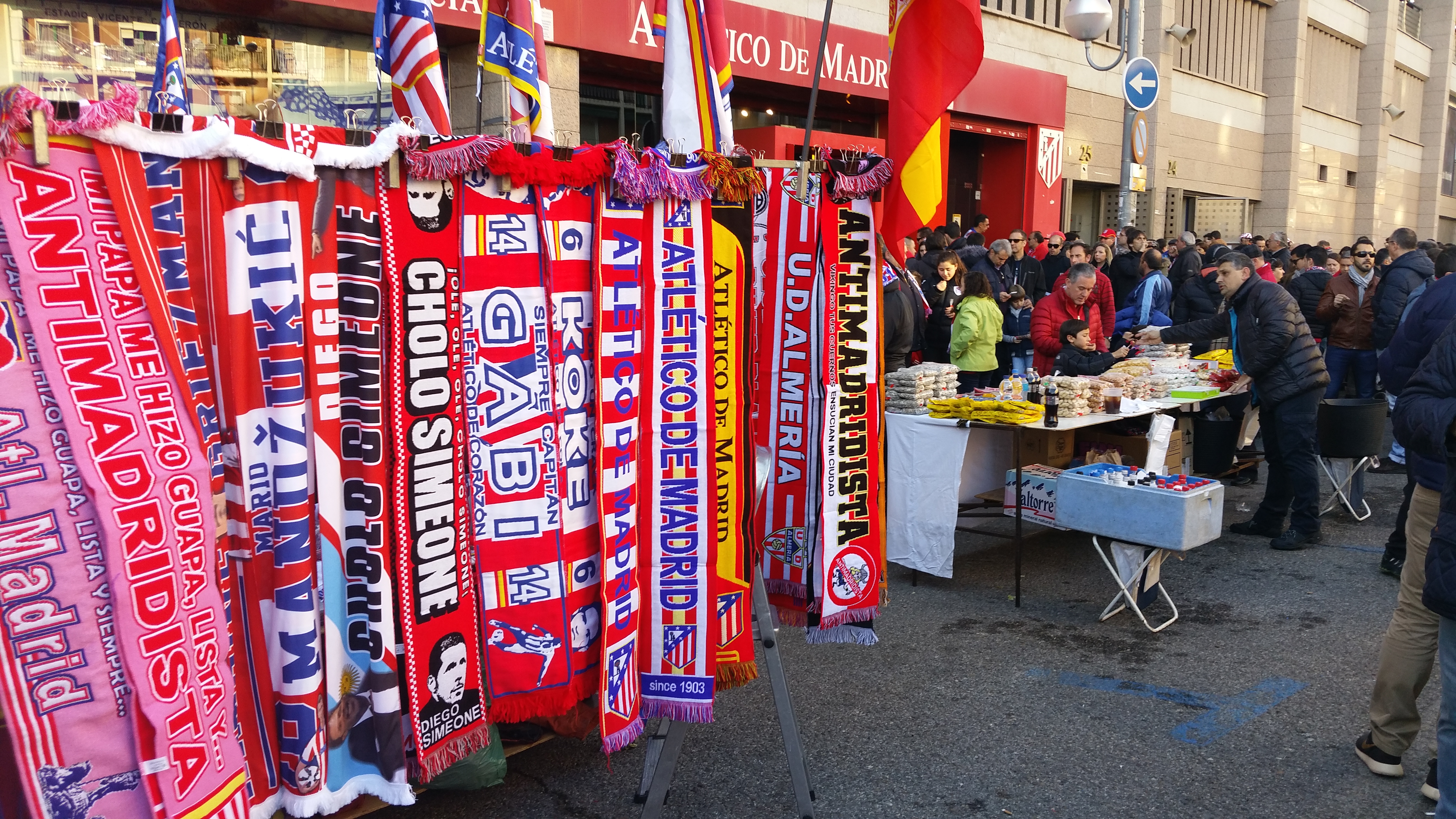 Where better to start a holiday in Madrid than with a visit to the Estadio Santiago Bernabéu, home of Real Madrid, on New Year’s Eve? Real are a rich and famous club, and they know it. Visitors come from all over the world to visit the Bernabéu. The dressing rooms, tunnel, dugout and press room are all open to guests and selfie-takers. Much of the tour is available in English, though communication breaks down a little at a sign to the ‘vomitory’ at the top of the stairs (the image is of fans being spat out into the stadium). Some are disgusted by Real’s wealth, but the swagger about the place has helped to make Real the club it is. Whether you admire Real Madrid or despise them, it is hard not to regard the Bernabéu as one of the temples of football.

But if there is one thing that Real want you to take away from the Bernabéu, it is knowledge of ‘La Decima’ or ‘the tenth’, meaning the record tenth European Cup they won in Lisbon last May. Ten replica trophies are given their own room. A photo with another one is an almost compulsory part of the tour. Real’s thirty-two Spanish league titles are almost a sideshow: it is their success in the European Cup and Champions League which has made them (more or less) the biggest club in the world. David Beckham barely features at all in the museum, which would be unsurprising but for the prominent place given to Steve McManaman. The reason, of course, is that Beckham never won the Champions League with Real Madrid, whereas McManaman scored in the 2000 final against Valencia (‘La Octava’) and came on as a substitute against Leverkusen in 2002 (‘La Novena’).

But Real are not the only show in town, and the following Saturday took your reporter to the Vicente Calderón to watch Atletico Madrid take on Levante. No mention here of the Champions League they were just moments away from winning when Sergio Ramos’ header eluded Thibaut Courtois to force extra time. Atletico revel in the league title they captured last season, becoming the first team to prise the championship from Real and Barcelona since Rafael Benitez’s Valencia did so in 2003/04. Manager Diego Simeone, known as ‘Cholo’, is revered; Diego Costa shirts are still peddled near the stadium. On the pitch, Atletico were by far the better side and were two goals up shortly after the break, though they needed a late goal by centre-back Diego Godin to ensure victory after Levante had nicked a goal back.

A solid win, then, and three useful points on a weekend when Real’s incredible winning run was finally ended, and Barcelona met a surprising nemesis in the form of David Moyes. But the big news of the week for Atletico fans was not victory over Levante, but the return of a certain Fernando Torres. Forty-five thousand fans, barely fewer than the number who had turned out against Levante, went to the Vicente Calderón the day after the game to witness Torres’ unveiling. It has been years since he received such adoration; though Chelsea fans were remarkably loyal to Torres, they did not love him as they do Drogba, and with good reason. ‘Torres: Always Red and White’, announced the merchandise. It was like he had never been away.

Nor does the football end with Real and Atletico. Getafe is a suburb of Madrid, and hosts a club now playing its eleventh consecutive season in the top division. A visit to their Coliseum Alfonso Pérez is a somewhat different affair to the Bernabéu or Vicente Calderón. A low-rise, mostly uncovered stadium largely hidden behind well-scrubbed redbrick buildings, the Coliseum looks almost more like a cricket ground, though many Spanish stadia are sparing with the use of roofs. In a mid-table contest against Rayo Vallecano, the home side took the lead after two minutes but were outplayed thereafter by a visiting side featuring Chelsea loanee Gaël Kakuta, who performed well in a 2–1 win. Real Madrid are the next league visitors.

Barcelona usually crop up only in tourist shops – where postcards of Neymar and Suarez sit uncomfortably next to those of Ronaldo and Bale – and in sports bars. The ten top-flight matches scheduled for the weekend in question kicked off at nine different times, so that as many as possible could be shown, and watched, on television. It is the level of coverage which Sky no doubt dreams of. Spain has no equivalent of England’s television ‘blackout’, which was imposed in the 1960s to protect match attendances and prohibits broadcasters from showing live football between 2.45 and 5.15 on a Saturday afternoon. The rule led to the farcical sight in November of Sky being unable to show the first fifteen minutes of El Clasico to English fans, just in case the live broadcast dissuaded them from heading to Catalonia. But has the breadth of coverage made visiting the ground pointless? The 45,000 who turned out to watch Fernando Torres do a few keepy-uppies didn’t seem to think so.

—> Go to page 2 for answers to the Christmas sports quiz!

16. One mile, four furlongs (one and a half miles)