Kane trumps Higuaín in the battle of centre-forwards 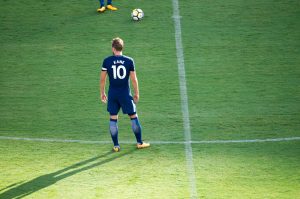 At the age of 19, Gonzalo Higuaín made his debut for Real Madrid. He had a full set of hair. He was to be the start of the post-Galacticos era. He arrived from River Plate having scored a brace in the Superclásico againt Boca Juniors, a derby that sees Argentina left at a standstill. He was a kid and he was at the biggest football club in the world.

At the age of 19, Harry Kane broke his metatarsal while on a loan spell at Norwich City. He returned to make just one more league appearance for The Canaries before disappearing into the reserves of Tottenham. He wasn’t a childhood prodigy, a genius who had destroyed defences at youth level. Rather he was a plumper character, presumably destined for a career in the lower-ranks of the Football League. He was a kid and his career wasn’t really going anywhere.

On Tuesday night, the paths of Higuaín and Kane crossed in Turin. Higuaín no longer wears the white of Madrid but the black and white  of Juventus. Kane still bears the Tottenham badge, but he sure isn’t in the shadows. He might not wear the armband, but he is their leader, the man they look to when all hope is fading. And all hope certainly is fading. The man to blame for Tottenham hearts breaking; Mr. Gonzalo Higuaín.

Much has been made of Higuain’s appearance over the last few years. He might not appear to be the physical specimen to lead the line of a European heavyweight. His goal-scoring record makes a mockery of that. Since arriving in Italy from Madrid, he has surpassed over a century of goals in the Serie A.

He’s at it again tonight. Just the second minute of the game and Higuaín pulls away from his marker with ease as a free-kick is floated in. He isn’t looking at the goal but he knows exactly where it is. He unleashes a right-footed volley that is somewhat close to technical perfection. It all lies in the way he pivots his body, with a short time window for making the right connection with the ball coming over his right shoulder. Miss it by a millisecond and Higuaín will be lying on his back, staring at the heavens. Higuaín makes it. The balding striker from Argentina shows the grace and elegance of a ballerina. He roars away towards the Turin faithful.

The same roar is repeated a few minutes later as Higuaín tucks in a penalty to double the Juventus lead. Mauricio Pochetinno’s men are shell-shocked.

There is more to this Tottenham side to Harry Kane. There is a water-tight defence supplemented with the midfield power of Mousa Dembélé, the guile of Dele Alli, and the artistry of Christian Eriksen. There is a growing depth to the squad as well with the newly acquired Lucas Moura an exciting signing. To call this side the ‘Harry Kane team’ is wrong. And yet, he is that something special that can turn a promising side into one that invokes fear into its opposition. As Tottenham’s European dream was beginning to slip away from them, the man linked every passing day with a move to Higuaín’s old employers, launches into hyper-drive.

Eriksen’s delightfully weighted ball to Kane in the 26th minute seemed to be the perfect moment for the centre-forward to begin the Tottenham revival. Only a trip back in the time-machine from Gianluigi Buffon halts Kane’s header from opening up the tie. The respite doesn’t last for too long. Less than ten minutes later, Kane times his run with perfection as Alli splits the Juventus defence. A quick touch takes him round Buffon but there is still plenty of work to be done. Kane’s left foot comes to the fore, making a mockery of the distance and acute angle that should make his finish a difficult prospect. Kane makes it all look so easy. Tottenham are well and truly back in the tie.

Perhaps the biggest fault that has lay in Higuaín’s distinguished career has been his failure to seize the grandest of stages. While he performed admirably for Real Madrid he was never to become their leading showman, a spot obviously saved for a certain Portuguese superstar. While his move to Italy brought him star status, his faults remained. A World Cup final saw an offside goal and a glaring miss. A Champions League final saw his side blown away by the brilliance of his old friends from Spain. Against Tottenham he has a quick brace but can he find the touch to ensure that the return leg in London will be a futile event.

Before Kane’s goal, he has that chance as Juventus break with pace. He puts his shot wide. On the stroke of half-time everything is put on a plate for the Argentinian. Douglas Costa’s pace is too much for Serge Aurier as Juventus are awarded another penalty. Higuaín steps up. He doesn’t opt for the corners but blasts his shot against the crossbar, straight down the middle. It is half-time and it is 2-1.

The second half sees Tottenham hound Juventus into submission. Kane leads the constant pressing, as the Italians lose all sense of a game-plan. A free kick sees Eriksen step up to make the great Buffon look a shadow of himself. The final whistle blows and it is 2-2. It is 2-1 to Higuaín in the goal-scoring stakes. It will be Kane who will return home the happier man.