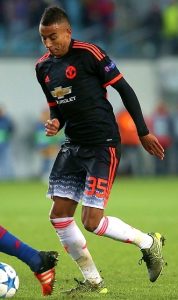 As Chelsea were holding their fort for a draw against Manchester United at Old Trafford on Sunday, Wayne Rooney gazed down from the stands, taking in the view of his former club struggling to find a winning goal. The United faithful could have been forgiven for wanting their club-record goal-scorer to enter a time-machine, go back ten years, put on his boots and drag his side to a win.

Alas, a breakthrough would come in the form of a player who is now truly arriving as a Manchester United footballer. Jesse Lingard’s lovely cushioned header sealed a much-needed three points for his side, as Liverpool had climbed above them in the table the previous evening with a thumping win over West Ham. While the star of the game was unquestionably Romelu Lukaku, a goal and assist against his former side, it was Lingard who had the decisive say in the match, scoring his eighth league goal of the season.

At the start of the season it was hard to see Lingard as anything more than a player on the fringes. This despite the fact that the England international has scored the winning goal in an FA Cup final, while also finding the net at Wembley twice last season in both the Community Shield and the League Cup final. Nevertheless, a regular starting berth has continued to evade the academy graduate.

This season the potential that saw rave reviews from Sir Alex Ferguson when Lingard was 19, has come to fruition. What has always stood out with Lingard is his game intelligence. If you keep your eyes firmly fixed upon him through a game, he drifts into space with greater ease than most, ghosting between the lines. This season that ability has conjoined with a more lethal approach in front of goal.

A stunning solo run and finish against Watford kick-started a run of nine goals in his next seventeen appearances. Nevertheless, as the action kicked off on Sunday, Lingard found himself on the bench once more. The arrival of Alexis Sanchez has added even further competition for the youngster to battle with. It was a front three of the Chilean, Lukaku and Anthony Martial that Jose Mourinho favoured on this occasion. Confined to watching on from the sideline, Lingard had to take in a scintillating Chelsea start that would eventually see Willian blast a shot past David De Gea, the result of a rapid counter-attack. While Lukaku would combine with Martial to level scores before half-time, it was once more a laboured display from United, following on from their goalless draw with Sevilla earlier in the week.

The second-half took upon a different narrative as United wrestled back the initiative. Chances remained at a premium though, with Lukaku’s acrobatic scissors-kick United’s closest sight at goal. It wasn’t till the appearance of Lingard that United’s luck changed. This was not the first time the attacking midfielder has bailed out his side, his double against Burnley in December rescuing a point from the jaws of an embarrassing defeat. Here, Lingard made one of his trademark ghosting runs as Lukaku tried to find some assistance from his position on the right-wing. A brilliant cross found the incoming Lingard, drifting in behind Andreas Christensen to gain a vital victory for the home side.

This remains a disjointed United side, with Mourinho still unaware of his best side and how to get the best out of record-signing Paul Pogba. What seems certain though is that Jesse Lingard deserves to be one of the first names on the Portuguese manager’s team sheet.