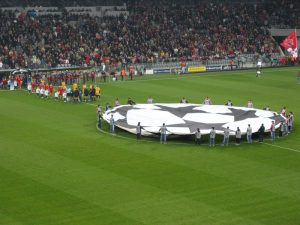 Over the last couple of weeks European football has returned to our screens, with seven British teams fighting it out for continental glory. In the Champions League we have seen the first legs of the last sixteen, and the draw for the same stage has been made in the Europa League.

Arsenal stuttered through past the Swedish side Ostersunds FK. A comprehensive 3-0 victory away from home seemed to have put the tie to bed in Arsenal’s favour. However, it wasn’t as simple as that for the Gunners as a quick-fire double at the Emirates from the Swedish side brought the aggregate score back to 3-2, and a potential comeback was on the cards. A Sead Kolasinac goal just after half-time put Arsenal back in the driving seat, and they eventually progressed, albeit unconvincingly.

AC Milan, a former continental powerhouse on a resurgence after their recent dormant period, lie in wait, and Arsenal without a doubt have to improve to have any hope of progressing. The way their team struggled to navigate this tie over two legs will worry fans against a more knockout-tie savvy opponent, with players needing to improve performances. For example, Roy Keane labelled Jack Wilshere “the most overrated player on the planet” while analysing his performance.

Celtic were unable to take advantage of the one goal lead they travelled with to freezing conditions in Russia, going out to Zenit, after being beaten 3-0 on the night and 3-1 on aggregate. Having been one of the teams to come down to Thursday night football from the Champions League, they will be disappointed to be out of the competition on their first hurdle.

The knockout stages of the Champions League are well underway, with all of the Premier League sides possessing a genuinely strong chance of progression. The attacks of both Manchester City and Liverpool have now surpassed all superlatives. Liverpool, inspired by hat-trick hero Sadio Mane, put five past Porto, while Manchester City showed their attacking prowess with four goals against Basel. The massive boost that away goals give mean that it looks impossible for the two to go out, and the way that they demolished their opposition will have struck fear into Europe’s bigger sides.

Tottenham and Juventus played out an entertaining match in Turin, with Tottenham coming back from two goals down to draw and score two valuable away goals. The spirit of their performance and other recent victories against big sides such as Arsenal and Manchester United will mean that there will be genuine confidence in the Spurs camp moving into the next round.

United were also away, drawing 0-0 in Sevilla. Only David De Gea’s brilliance stopped Sevilla from scoring, with a save from a Luis Muriel header from extremely close range the best of the lot. United have a huge chance of progressing if they defend well and score, with two goals probably necessary, due to Sevilla looking like a side very capable of finding the back of the net. This makes for an intriguing affair with United usually preferring a defensive approach under Mourinho in the bigger games.

Finally, Chelsea drew 1-1 at Stamford Bridge. Willian scored first after twice hitting the post, but after a mistake from promising defender Andreas Christensen, Lionel Messi strode into an Andres Iniesta cutback to finally break his eight-game duck of not scoring against the Blues. Chelsea’s passage into the next stage looks most at threat of the Premier League sides, with the Nou Camp a daunting place to go to and win at. However, memories of Fernando Torres rounding Victor Valdes and scoring to send Chelsea into the 2012 final are fresh in the memory, and so again there is an atmosphere of excitement building for the second leg.

While all of the English teams have the potential to progress, Chelsea’s task of winning at the Nou Camp is the most daunting and difficult. In the Europa League, Arsenal certainly need to up their game with a truly formidable European run looking necessary for Wenger’s side to salvage their season after Sunday’s embarrassing loss in the Carabao Cup final.

As a side note, it was brilliant to watch Real Madrid vs PSG and see the incredible skill and ability of every player on the pitch, with Marcelo in particular encapsulating the modern full-back, covering every blade of grass and scoring an important goal.