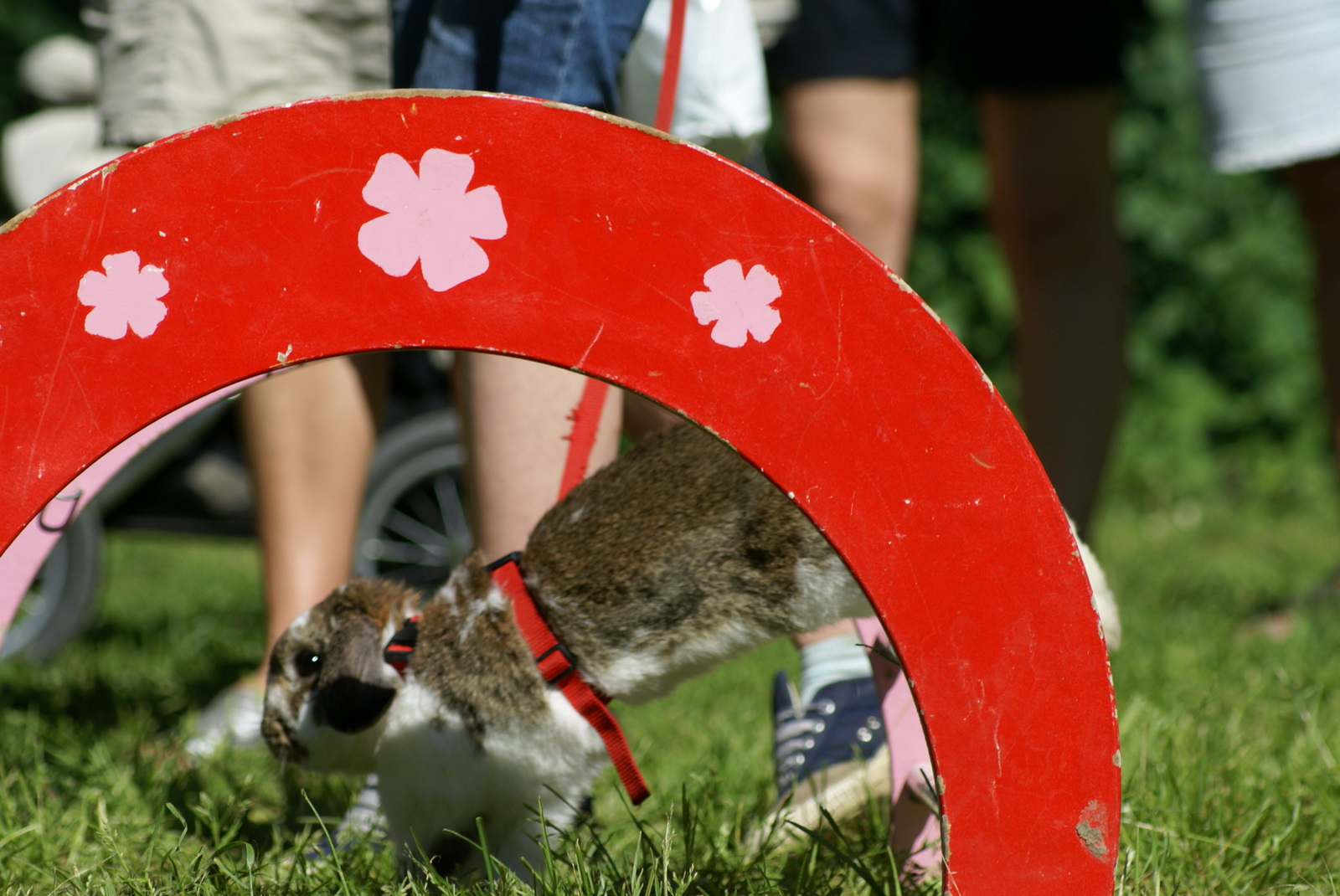 Kaninhop, otherwise known as rabbit show jumping, is modelled after horse show jumping. The only is that it is done on a much smaller scale…with bunny rabbits!

The sport started in Sweden in the early 1970s. At that time, the rules were based on the rules for horse jumping, which were later reformed to better suit the rabbits. In 1987, the first national championship for ‘straight line easy course’ was held in Stockholm. The sport grew throughout Sweden, and in the early 1990s, Norway joined in with rabbit jumping activities and competition along with Sweden. The Swedish Federation of Rabbit Jumping (SKHRF) was established on September 3. 1994. Then, in 2000, Germany followed suite and started their own rabbit hopping club. Organizations were established in Norway (2002) and Finland (2004). The training and participation with translations for a new set of rules came from the judges committee in Denmark. 2001 saw the Rabbit Hopping Organisation of America (RHOA), the rules and guidelines created with the help of the Danish judges.

The American Hopping Association for Rabbits and Cavies (AHARC) was chartered with the American Rabbit Breeders Association (ARBA) in 2013. The rules and guidelines were modelled after the 2001 association and Denmark.

The sport has also travelled down under, with 2013 seeing the beginnings of the Rabbit Hopping Society of Australia.

The mini course is introductory, and to progress from easy to medium and so on, a rabbit has to earn promotion points. Rabbits are placed according to the number of faults they have, with time only coming into play as a tie-breaker.

The sport has become so popular that it has started forming records. The Guinness Book of World Records even makes note of the world record for the highest rabbit jump, which was 99.5 cm, achieved by Mimrelunds Tosen (“The Lassie of Quivering Grove”) – honestly, why would you name your rabbit that? – of Denmark on June 28, 1997.

However, this record was recently beaten by Snoflingans (“Super Champion”) – at least this name makes more sense – Majesty of Night “Aysel” – I take it back – who jumped 100 cm high!

Naturally, I went looking for this. There’s a video on YouTube. I suggest you give it a watch, I promise it will brighten your day.

There’s also a record held for the longest jump, which was three metres (oh my god!) held by Yaboo (what even is that name?) and was set on June 10, 1999.

I’m not gong to pretend to understand why this sport is necessary in society, given most people in the stands probably won’t be able to see anything and rabbits should not be punished with exercise. But I’m thankful that adorable, put-a-smile-on-your-face sports such as this exist. Particularly after the last bizarre sports issue on buzkashi.

I suppose the cuteness and fluffiness of this sport balances out the buzkashi sports of the world.

So if you’re ever in need of a pick-me-up or a giggle, make your way to YouTube and watch videos of this competition.