In Thailand, possessing a vaping device is a felony, those caught face a heavy fine and up to ten years’ imprisonment. Since September 2019, the sale, import and production of e-cigarettes has been banned in India. Mexico has prohibited any e-cigarette containing nicotine, and the US states of Michigan and New York have banned all flavoured vape products. 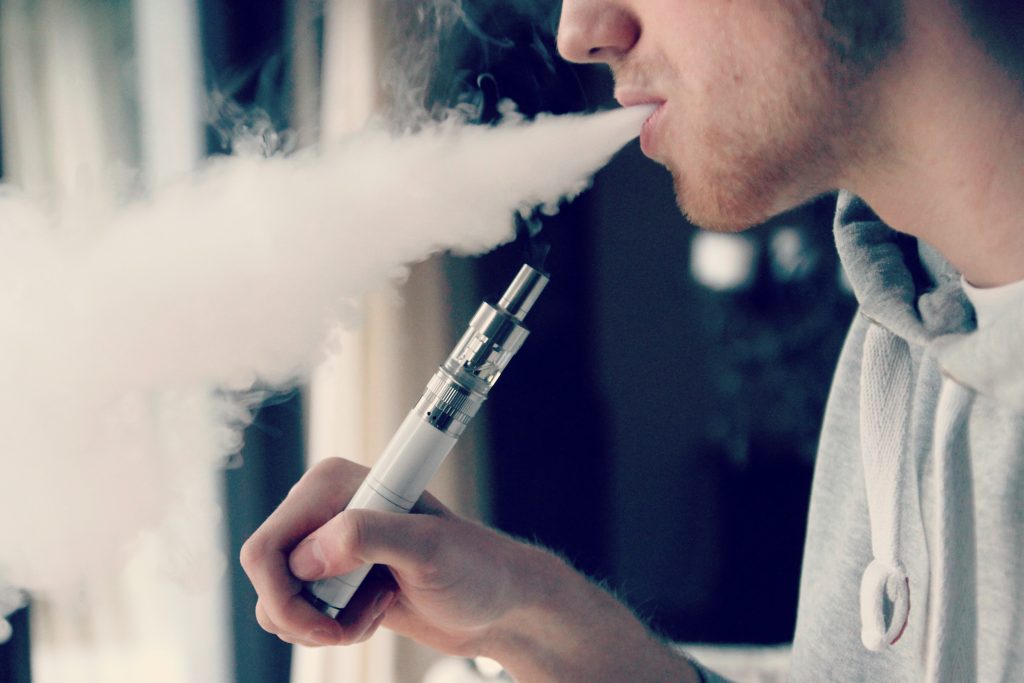 Image available on Flickr from Vaping360.com under Creative Commons 2.0 license.

The NHS, on the other hand, is endorsing e-cigarettes as a stop-smoking aid. Data from ‘‘OneYou’, the NHS’s own well-being website claims that 3.2 million adults in Great Britain are using e-cigarettes as a means to quit smoking tobacco products and, that this has proven successful for thousands of people in the UK.

E-cigarettes come in different types but all essentially work in the same way. A liquid consisting of nicotine, propylene glycol, vegetable glycerine, and, sometimes flavouring is heated and vaporised by the device.

Vaping eliminates two of the most dangerous substances associated with smoking, carbon monoxide and tobacco, and is therefore considered less of a risk. Nicotine constitutes a large quantity of the e-liquid which, albeit addictive, is thought to be harmless. To put it simply, e-cigarettes are advertised as a product that will meet your nicotine cravings without the substances that make smoking so dangerous – an ideal outcome.

Cancer Research UK, Public Health England, and the US National Academics of Science, Engineering and Medicine have concluded that vaping is less harmful than smoking. However, to say that e-cigarettes are safe as a justification for your newfound vaping habit, is a bit of stretch.

Whilst there are no confirmed deaths associated with vaping in the UK, the British Medical Journal (BMJ) reported the diagnosis of a young woman in her 30s who was presenting with respiratory failure upon hospital admittance, as lipoid pneumonia. She was a habitual vaper and examination revealed the cause as vegetable glycerine, one of the main ingredients in e-liquids.

According to the Medicines and Healthcare Products Regulatory Agency (MHRA), vaping has been linked to 200 cases of pneumonia and other health problems in the UK. Government Response has issued several reports to examine the impact of electronic cigarettes on human health and their efficacy as quit-smoking tools. The Science and Technology Committee reported that whilst e-cigarettes are significantly less harmful than smoking tobacco, they don’t come without harm and that the word ‘safe’ shouldn’t be associated with them.

With the UK Centre for Tobacco and Alcohol studies claiming that:

‘Sustained inhalation of the multiple components of [e-cigarette] vapour is likely to cause some harm to health, and potential harms include lung cancer, chronic obstructive pulmonary disease, interstitial lung disease, and cardiovascular disease. However, the concentrations of toxins and particulates in vapour are generally low, and much lower than in tobacco smoke, so the risk of e-cigarette use is likely to be small in relation to tobacco smoking, and may also be small in absolute terms.’

E-cigarettes don’t have a long history of use; it is currently impossible to be certain of their long-term health effects. It is also difficult to judge the extent of damage of e-cigarettes as most users smoked tobacco burning products before making the switch to vaping.

As part of its promise to maintain high quality control, the Government has promised to report evidence reviews every year and to support a long-term research programme into the effects of e-cigarettes.

The UK government seems to be confident that its tight regulations on e-cigarettes will prevent the ‘Vaping Epidemic’ that has spread across the United States. The U.S Centre of Disease Prevention (CDP) has reported that as of the 5th of October 2019, vaping has been linked with 1,479 lung injury cases and 33 deaths in 24 states. The outbreak is thought to be caused by tetrahydrocannabinol (THC) in e-liquids, specifically from those obtained off the street. The CDP has recommended to constrain from all e-cigarette use in the US whilst it is “working 24/7 to identify the cause or causes of this outbreak”. What does this mean for the UK?

1) Our tighter regulations are saving our researchers a lot of sleep,

2) If you are a vaper, buy your e-liquid from a reputable place, just to be safe.

We must remember that the increased popularity of vaping has made way for a multi-million-pound industry. Just last month, we watched the CEO of leading vaping business Juul step down following accusations that the company was of advertising e-cigarettes specifically to teenagers, attributing it to the peak in teenage vaping in the US. Government research in the UK hasn’t showed that the introduction of e-cigarettes on the market has increased the numbers of teenage smokers, or its role into a gateway for smoking, nor has it seen an outbreak in vape-related diseases. It is confident that e-cigarettes can continue to be regulated and provide relief for tobacco smokers without attracting the younger generation.

It is also important not to forget that in the 1930s and 40s, tobacco companies used doctor’s authority to reassure the public that cigarettes were safe, even recommended.

For now, with the research currently available, we can say that vaping is the lesser of two evils. However, to say that is safer than smoking isn’t saying much when you consider that tobacco products are associated with 78,000 deaths in the UK each year.