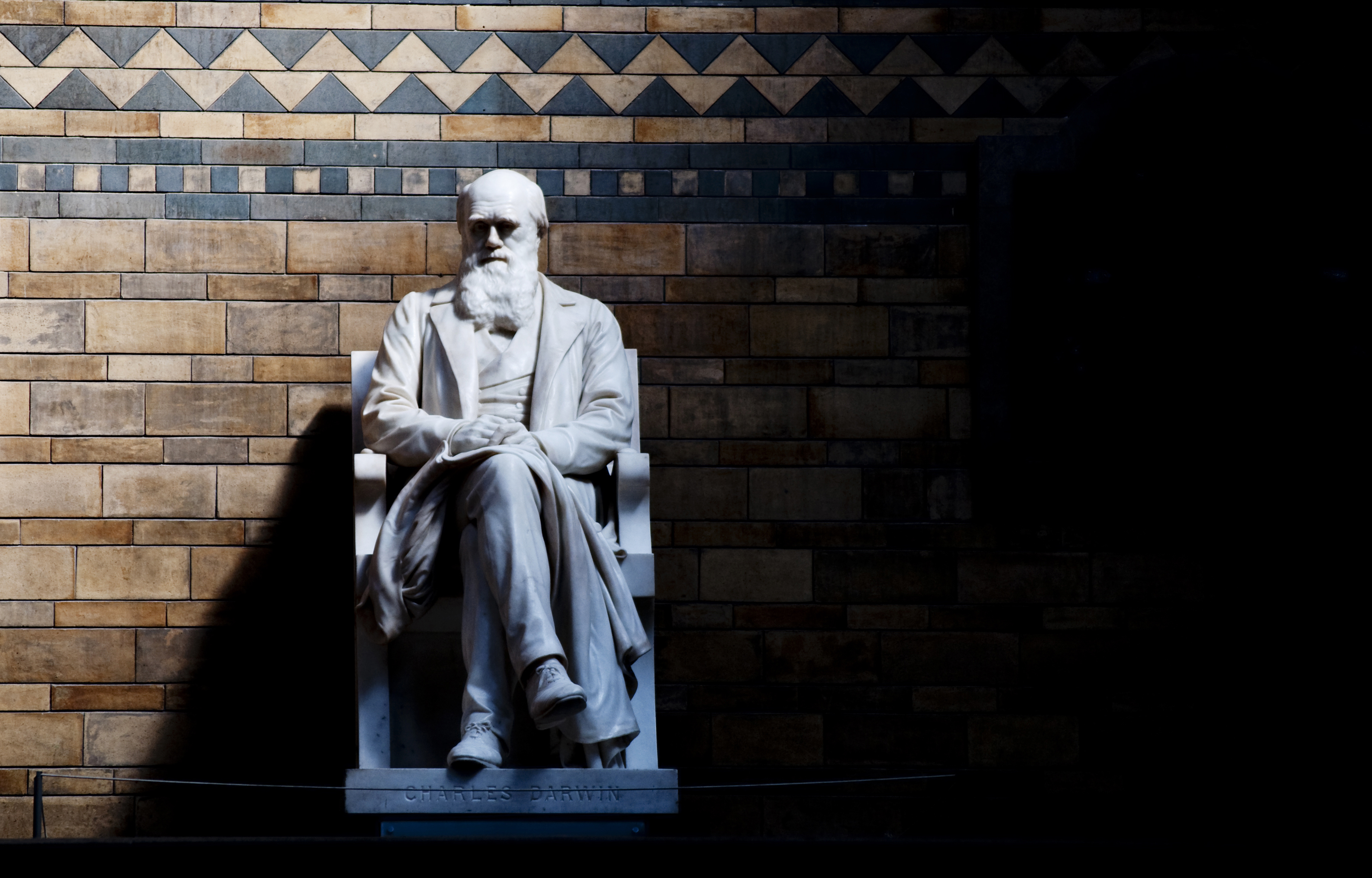 Is Darwin really the evolutionary God we want him to be?

We all think of Darwin as the Godfather of evolutionary biology. After all, he was the one that kick-started things and did away with the ‘God created us perfect’ ideology. However as with most 19th century scientists that dared challenge the current consensus of the time, there was and is always the inevitable shortfall of the theory.

“We are descended from monkeys”. I hate this term because it’s simply not true and it is thrown around the media with little regard for public perception. In fact, we share an extinct common ancestor with orangutans, gorillas and chimpanzees, from around 13 million years ago. Our closest relative, the bonobo, or ‘pygmy chimpanzee’, diverged from us about 6 million years ago. This seems to me an incredibly short time for two completely unique species to evolve, and yet humans are still rapidly evolving. Compare the average 20-year old in 1990 to the average 20-year old now, we have a completely different set of behaviours. Take a trip to any major zoo and see for yourself the remarkable likeness between humans and apes. I often stand in awe watching chimpanzees frolicking about, because I see so much of us in them, and it’s humbling. Pre-Darwin, it’s hard to think how humans didn’t notice this before. Perhaps this was where Darwin’s suspicions arose?

Everyone’s heard of natural selection, but do they actually know what it means? “Survival of the fittest”, coined by Herbert Spencer, is the most common associated phrase with Darwin’s theory, and in part it should be. But there are many cases where this doesn’t apply. Take the dinosaurs for example. They were the dominant predators and herbivores of the Triassic and Jurassic periods, yet they were wiped out during the K-T mass extinction. Many researchers argue that this allowed smaller land mammals to diverge into the niche left by the dinosaurs. Looks like we need to thank the dinosaurs for our own existence. So survival of the fittest is exactly as it sounds- the individuals, and species with the ‘fittest’ set of genes are able to survive and reproduce and, most importantly, pass on their favourable traits into the next generation. Those individuals with less desirable traits, or who are ‘unfit’, die and so do not. Reproduction is key to evolution, under natural selection these ‘fitter’ traits are preferentially selected for and thus appear in the next generation. Defining fitness is difficult. It is essentially the representation of an individual’s genes in the next generation. Sounds all well and dandy but how do you measure this? There are a number of approaches biologists can take, using growth rate, number of females mated with, and dominance status, among others, as proxies for fitness.

So Darwin was the founder of evolution by natural selection, along with the often forgotten Alfred Russell Wallace. As a biologist I should probably recommend you go and read The Origin of Species, but I’ll save you the effort. It’s no biggie and that’s because we have already accepted natural selection as true and welcomed it with open arms into our biology textbooks. We take it for granted and this is most probably why I didn’t enjoy reading The Origin; it was boring and outdated but I love the style in which Darwin writes it, many an exclamation used and full of charming excitement. Compare it to a piece of current popular science writing and it’s the complete opposite. It’s unassuming, anecdotal and written like any other 19th century book. But it’s here that Darwin, or better his representation, comes under fire. ‘Darwin’s finches’ are a common occurrence in Biology textbooks worldwide. Long story short different finches on the different islands of the Galapagos archipelago have different sized and shaped beaks. These different species all diverged from one common ancestor and colonised a different island with a different food source, so evolved a specific adaptation to exploit this. However it was not Darwin that noticed this, he only speculated that the finches had a common ancestor and didn’t actually notice that each island was inhabited by different finches. It was the ornithologist David Lack that propagated the phrase ‘Darwin’s finches’ in his book of the same name in 1947. Darwin actually deserves some credit here as the finches didn’t give Darwin his insight into evolution, he was able to develop his theory regardless. It’s emerging that part of the reason why Darwin is ‘wrong’ is because of misunderstanding, we have changed his story to best fit education of evolution and the media.

My favourite aspect of Darwinian evolution is that of sexual selection. All around the natural world organisms possess seemingly impractical characteristics that don’t benefit their fitness and so cannot be explained by natural selection. The theory behind this is that males evolve these characteristics, i.e. an unnecessarily long tail or the extravagant plumage of peacocks, because it is a symbol of the individual’s fitness to potential mating females. Females preferentially mate with these males as the development of these ornaments depends on good health and so are a positive signal, despite their maintenance costs. Sexual selection has led to the characterisation of the sexes; females are ‘choosy’ and males are ‘passionate’ and compete for access to females. Thus sexual and natural selection have led to the evolution of ‘selfish’ individuals whose main purpose is to maximise their fitness and pass on their genes to the next generation.

Recent researchers, such Joan Roughgarden, have trouble accepting Dawkins’ famous selfish gene theory and Darwinian sexual selection. Instead of evolution all relying on individual survival and fitness, they argue cooperation and sociality is key to evolutionary success and thus sexual selection needs some remastering. Roughgarden debates that there are too many discrepancies, outliers and species that do not fit sexual selection theory and so an alternative theory must be developed. When I first started reading her book, The Genial Gene, I thought it was silly, surely no one could contend with the Godfather himself and prove him wrong? But after I’d read each and every example cited it all made sense. As much as I hate to admit it, she’s right, there just are too many mistakes in Darwin’s theory. Firstly, sexual selection predicts dimorphism between males and females, a good example being male Southern Elephant seals, who weigh 5–8 times more than females. But not every species exhibits such dimorphism, or even dimorphism at all. If sexual selection predicts this then why is there so much variation in dimorphism between different species?

It is speculated that dimorphism has not resulted from sexual selection, but instead for predator avoidance. Let’s look at the peacocks again. Suppose the only reason males possess such an elaborate plumage is because females have evolved to be cryptic in order to avoid predation, the suggestion being that female hormones may inhibit development of such ornamentation. This all suddenly sounds incredibly plausible, so why hasn’t it been accepted as true? If females are the ‘choosy’ sex then you would expect males to initiate the majority of copulations, but in species such as the Alpine accentor (a small bird), females initiate matings 93% of the time. It’s evident that each gender does not follow its distinct role that has been defined by sexual selection. The plasticity of the sexes, including transgender and homosexuality, means a new classification is required.

Then what’s the alternative? Roughgarden proposes ‘social selection’, in which female choice maximises offspring quantity, as opposed to genetic quality. Male and female investment in offspring are equal, sex roles can be subject to local circumstances and the purpose of social behaviour is to produce offspring. Most interestingly, with regards to human evolution, homosexuality is not an anomaly in social selection theory, but a mechanism that allows animals to work together and cooperate. This completely goes against Darwinian evolution geared towards individuality and will cause biologists to look at evolution from a different but well needed perspective.

Do we have the right to challenge Darwin? Certainly. We have a much wider understanding of the natural world than he ever did, thanks to new technology, so of course we can sit down and pick apart his version of natural selection. The reason why it’s so hotly contested is because he was courageous enough to fight back against creationists and the Church to reveal how humans got to where we are now, and it would almost be a step backward to argue that Darwin was wrong all along. Here’s my version- Darwin wasn’t wrong, he did the best he could with what he had, but now we are doing the best we can with what we have. It just so happens that the tools we have are significantly more advanced than Darwin’s – of course we’re going to come out on top. But let’s give Darwin credit where credit is due, after all he did have a fantastic beard.