Seeing The Unseeable: How we obtained The First Black Hole Image

“We have seen what we thought was unseeable,” Sheperd Doeleman, EHT director. 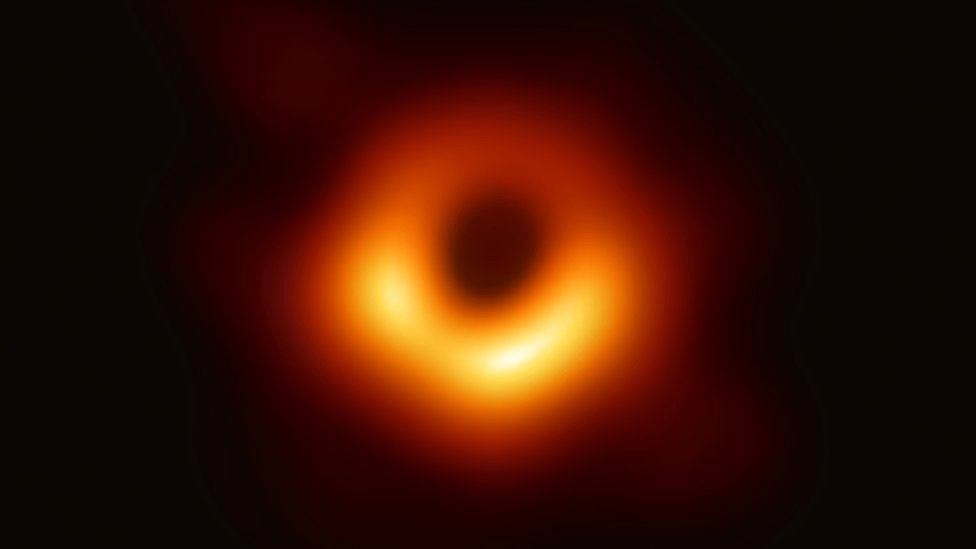 Figure 1: The first ever image of a black hole. The dark spot is the black hole’s shadow and the ring is a surrounding halo of bright gas. Taken from Event Horizon Telescope1.

In a historic moment, Scientists have unveiled the first ever image of a black hole.

Theorised over 100 years ago by Einstein, black holes have always been mysterious objects and loved by science fiction fans everywhere, but we have never seen an image of one; until now.

On the 10th April, conferences were live streaming to the whole world as they released the image. It took a team of over 200 astronomers 2 years to produce, and provides the first direct evidence for the existence of black holes. Understanding black holes is crucial in the understanding of gravity and the evolution of our Universe.

The black hole imaged is what’s known as a “supermassive” black hole, located in the centre of a distant galaxy (over 500 trillion km away) called M87 (see Fig 2). It is over three million times the size of the Earth, larger than our entire solar system, and has a mass 6.5 billions times that of the Sun2. The ring of light seen in the image is formed from material rotating at incredibly high speeds producing light that is actually bent in the intense gravity of the black hole. The light is brighter than all of the billions of stars in the galaxy, which is why we can see it from Earth. 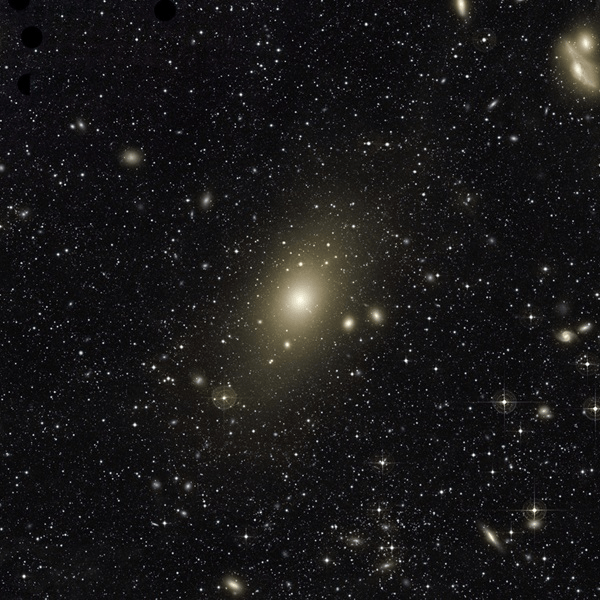 What is a black hole?

Black holes are incredibly dense regions of space that have such a high gravitational field that nothing, not even light can escape. They are formed from the collapse of massive dying stars (over 25 times larger than the Sun).  The “point of no return” (distance away from a black hole where light cannot escape) is called the event horizon, hence the name of the telescope. A supermassive black hole is exactly what it sounds like: a really big black hole. They are hundreds of thousands to millions times the mass of our sun and are found in the centre of almost all known galaxies (including our own!).

Since light can’t escape a black hole, we can’t send a camera or probe to photograph the inside of a black hole since it could never get out. Also, the gravity would tear apart any object (or person) attempting such a stunt. Therefore, this first image of an event horizon will be able to tell us much more about this mysterious region.

There have been lots of evidence supporting the existence of black holes, but there’s nothing quite like staring one in the face.

Black holes were originally theorized to exist by Einstein in 1916. Since then there has been a lot of indirect evidence supporting their existence, most notably the detection of gravitational waves 100 years later in 2016. However, there has never been an image of one; until now. As an astronomer that studies supermassive black holes, you often forget the thing you’re studying has never been seen so it’s an amazing achievement and milestone in scientific history.

The image was taken by the Event Horizon Telescope (EHT), a £40m project that consists of a series of 8 radio telescopes, on 6 different sites on the Earth: Hawaii, Mexico, Arizona, Spain, Chile and Antarctica (see Fig. 4).  Linking all the telescopes together, they formed an Earth-sized virtual telescope, with incredible resolution: equivalent to seeing an credit card on the surface of the moon2. 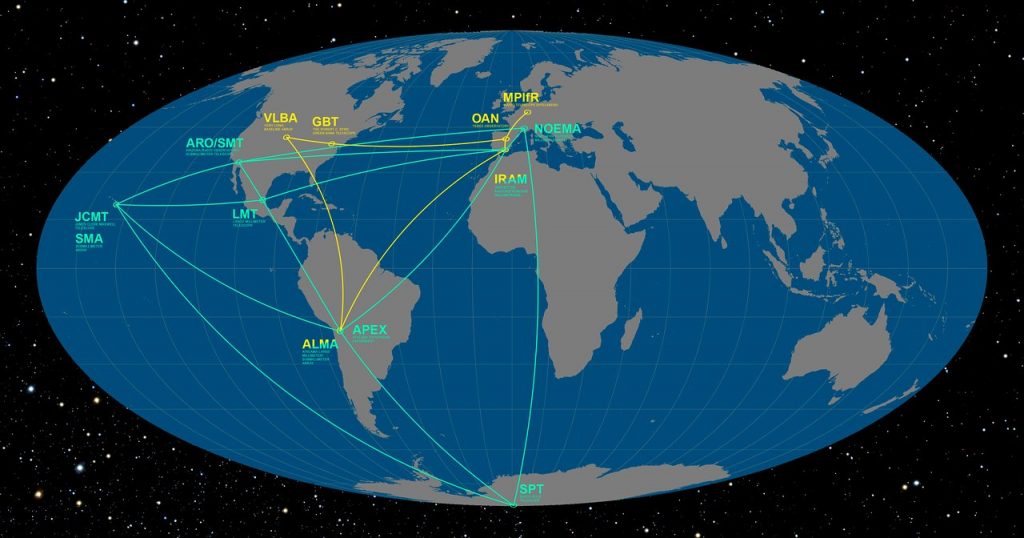 Figure 3: Locations of the participating telescopes of the Event Horizon Telescope (EHT), courtesy of European Southern Observatory, taken from Flickr.

Special atomic clocks are then used to calibrate the data so they can all be stitched together using a super computer (a very big, very fast computer). The black hole was imaged by the telescopes over 4 nights in 2017. The reason it’s taken so long to come out is simply there was so much data. Each night generated about 1 petabyte of data (equivalent to 10 billion photos or about 1,500,000 CDs), too much to send over the internet. Explained by EHT project scientist Dimitrio Psaltis, astronomy professor at the University of Arizona: “we take our hard drives and we FedEx them from place to place. This is much faster than any cable that you can ever find.” The huge size of these hard disks can be seen here. Especially difficult when one of your telescopes is on Antarctica! 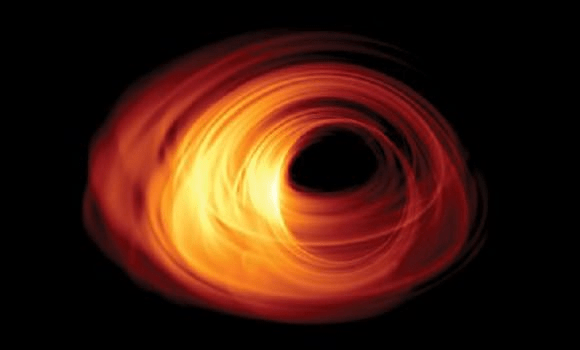 Figure 4: Simulated version of the black hole imaged by the EHT, courtesy of the European Southern Observatory.

What does this mean for Astronomy?

The only thing more remarkable than the picture itself, is how much of a perfect match to the theoretical predictions it is.  Fig. 7 shows the simulated version of the black hole, amazingly similar to the actual image taken. It’s another win for Einstein, who’s equations in his theory of General Relativity were used to calculate what black holes look like. From the image both the mass and spin of the black hole could also be measured extremely well, finding the M87 black hole was spinning clockwise. By studying the distribution of light, you can also study how black holes affect their surroundings and shape the evolution of their host galaxy, a big question in astronomy today.

This new technique gives astronomers a completely new way to study and understand black holes. Who knows, it could even help answer the most intriguing question of them all: what happens when an object falls into a black hole.

“We have achieved something presumed to be impossible just a generation ago,” Sheperd Doeleman, EHT director.

As well as M87, the EHT imaged another supermassive black hole called Sagittarius A*, which is in the heart of the Milky Way, our own galaxy. Although closer, this is a much harder object to image than M87’s black hole since it is a baby in comparison: a mere 4.3 million times the mass of the sun compared to the latter 6.5 billion. This means the ring of light is much dimmer, and so more difficult to observe. Images of Sag. A* are still to come, so more excitement is definitely on its way.

Although the image released wasn’t exactly a surprising result, the EHT collaboration are only just getting started so there is definitely potential for some surprising revelations about the nature of black holes.

This historic moment is not only a brilliant scientific achievement, but also highlights the move towards international scientific collaborations. It has (literally) connected the entire world, and has reached both astronomer and non-astronomers alike. Definitely so much more than “just a fuzzy picture”.