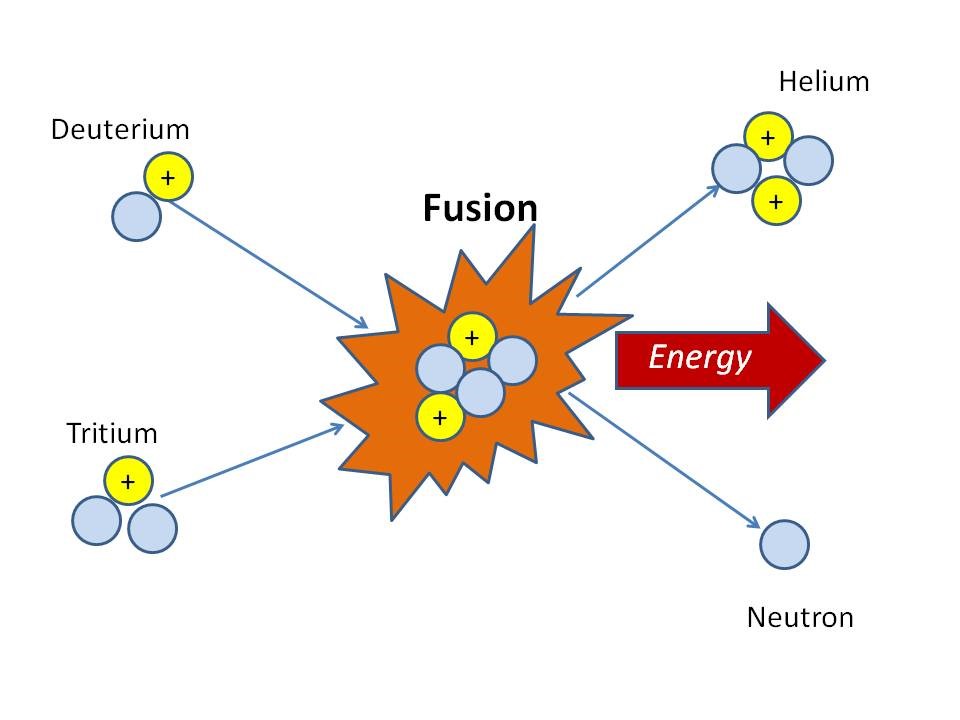 The fusion of the hydrogen isotopes, deuterium and tritium, is currently the most efficient reaction we can utilise for nuclear energy sources.

Humans worldwide depend on just three fossil fuels for over 80% of their energy needs: coal, oil, and natural gas. Whether eaten, worn, lived in, driven to work, driven for pleasure, used to control temperature, or just purchased, all are tied to these fossil fuels. Curiously, the most promising green alternative to dirty energy sources, fusion energy, is rarely mentioned.

Fusion is a nuclear reaction in which two or more nuclei come very close together and collide at a very high speed, thus joining to form a new nucleus with energy as a byproduct. This occurs at the core of a star due to extremely high pressure and heat. In fact, the Sun converts 4.4 million tonnes of mass into energy every single second, and it uses our most plentiful element. Accordingly, 91% of the atoms in the Sun are hydrogen, followed by 8.7% helium, a product of fusion.

The problem of producing fusion energy is that it involves duplicating the fusion process in a star like our Sun, which contains over 1.19 X 1057 hydrogen atoms compacted in the Sun’s core, an area 1/4 the size of the Sun’s nearly million mile diameter. While fission, used for nuclear power plants, splits atoms, fusion squashes hydrogen atoms together, utilizing the strong force to fuse them together with crushing pressure at over 17 million degrees Celsius. Gravity acts to compress the Sun, due to the Sun’s mass (333,000 times Earth’s mass), while nuclear fusion expands it, the two processes keeping our star in equilibrium.

This means that human-made fusion must work with small scale models of the Sun with a comparatively miniscule number of hydrogen atoms in an area with less density, requiring much higher temperatures to achieve continuous fusion, something the Sun has been doing for some 4.5 billion years. All this energy is produced without the toxic discharges of fossil fuels.

Fusion is the perfect energy source. It is not nuclear fission (splitting atoms), the process that produces energy in our nuclear power plants, potentially releasing deadly radiation, like Japan’s Fukushima. It doesn’t split atoms; it smooshes them together. It doesn’t produce waste. It provides up to four times more power than nuclear fission. Its main fuel is hydrogen, the most common element in the universe.

A one-gigawatt coal-fired power station requires 10,000 tons of coal every day. The lithium from a single laptop battery and the deuterium from 45 litres of water would provide the average consumer’s energy needs for 30 years.

This is why schemes to mimic the Sun have been attempted for some 60 years. No viable production breakthroughs have occurred during this time. In other words, nothing beyond a one to one ratio of “energy in” vs. “energy out” has been accomplished. In addition, none of the fusion reactions have been sustained for more than 7 minutes. The machines used are prototype fusion reactors. The fusion process has variously produced modest fusion energy with massive power inputs, most producing over 100 million degrees Celsius temperatures, utilizing controlled magnetic force.

The fuel for fusion energy is plasma, an electrically-charged gas in which the negatively charged electrons in atoms are completely separated from the positively charged atomic nuclei (called ions). It is the fourth state of matter, neither liquid, nor solid, nor gas.

A fusion reaction easiest to accomplish is between two hydrogen isotopes: deuterium, extracted from water and tritium, produced during the fusion reaction through contact with lithium. Einstein’s famous equation, E = mc2, is at work while a fraction of the masses of the particle constituents is converted into energy. Accordingly, when inputs of deuterium and tritium nuclei fuse (above), they form a helium nucleus, a neutron and comparatively a lot of energy. For the Sun, through a series of steps, hydrogen is fused, forming helium, and releasing two neutrinos, two positrons and gamma rays. We see this energy in the form of sunshine.

For sixty years, scientists have dreamed of a clean, inexhaustible energy source in the form of nuclear fusion. Finally much of our effort is registering much more promise. The trick is sustained fusion using less input energy than what is generated. The tokamak, an idea originated in the Soviet Union years ago, could not sustain fusion for longer than 6 minutes and produced no more power than it used. As computer technology develops, the stellarator is a concept with more promise, featuring a much more complex physical design that may fit the bill.

Taking over ten years to make, a prototype creation called W7-X with the stellarator design, was built in Greifswald, Germany. It seems to greatly reduce the drift of the plasma force so that long confinement times are possible. It thus creates the plasma; then accelerates the resulting ion and electron soup around the containment vessel near the speed of light.

It solves the tokamak problem of only being able to control plasma in short pulses, something which led to disruptions in plasma confinement due to erratic magnetic forces. The best of the tokamak design achieved sustainment of fusion for only seven minutes while Germany’s stellarator design has promise for thirty minutes or more of sustained fusion.

The design involves a 52-foot wide race track shape with twists of 180 degrees to produce a figure-8 configuration. Such a design, though difficult to engineer and model, helps keep hot plasma (over 180 million degrees Fahrenheit) contained in the center of the track corralled with 50 super-chilled 6-tonne magnetic coils circling the ribbon-like track and the figure-8 design forging a center plasma path with more precision. In this way an intense, unconstrained magnetic field moves the plasma at very high speeds. All of this is optimized by a supercomputer that can study the plasma waves in 3D patterns and control the plasma with magnetic fields through advanced continuum algorithms.

The physical design requires access ports for fuel ingress and egress with other ports for instruments, sensors and monitors for pressure, voltage, and temperature.

Picture a fusion power plant with no CO2 output, a series of them replacing coal plants (perhaps the worst source of pollution), which in the US alone emitted a total of 1.7 billion tons of CO2 in 2011. Gone would be their output of sulfur dioxide, a contributor of particulate penetrating lungs and the cause of acid rain, which damages crops, forests, soils, lakes and streams. Gone would be nitrogen oxide, causing ground level ozone, connected with asthma and respiratory disease. Gone would be particulate matter, robbing us of visibility and a host of diseases. Gone would be over half of all mercury emissions, causing brain damage and heart problems. Eventually many species of impacted fish would be safer to eat.

In 2010, the US produced about 3,886 million megawatt hours of electricity, which required burning 1,943 million tonnes of coal or 9,715 million barrels of oil. Basically, fusion reactors allow replacing this fuel with only 195,000 gallons of water for a similar output of electricity.

Remember we are now working on prototype nuclear fusion reactors. With a more improved understanding of the intricacies of the fusion process and more advanced technical capabilities, it is felt that the prototypes will lead to a viable production model within the next decade – but limited in scope, at that time.

Hopefully it will be soon enough to help save our planet from the worst effects of climate change.