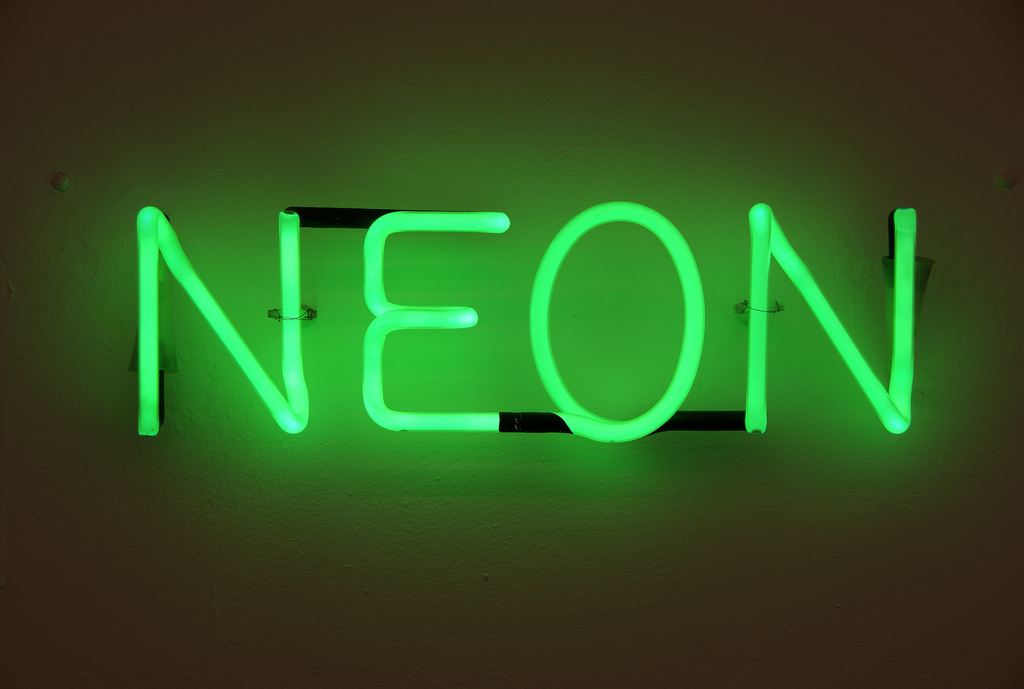 Travellers to New York Times Square see a jigsaw of colour and appeal when they cast their gaze to the bright and vibrant neon signs plastered on every wall. For advertisers, the ultimate outcome of the artwork is to gain the interest of every passer-by and the mesmerising neon lights do this excellently.

Most people recognise neon as the element used in the eye-catching, luminescent signs utilised by many iconic companies. The first neon sign was unveiled at the Paris Motor show in 1910 by an engineer, Georges Claude, who later commercialised neon lighting. Later, in the 1920s, Times Square became a beacon of neon lights. These lights can last up to 15 years without going off! The other noble gases in the periodic table (for example helium, which we met at the start of my series of columns) are used to create the various colours in ‘neon’ signs. However, they are still called neon signs because this was the first element to be used.

Even though neon signs were first seen in France, the element was actually first discovered a little closer to home, in University College London, by William Ramsay and Morris Travers in 1898. They chilled a sample of air until it liquefied and then slowly evaporated off gases by warming the liquid air. The first gases given off were nitrogen, oxygen and argon, all of which had already been identified. Next krypton (another noble gas) was distilled and then, finally, along came neon. But, to identify this mysterious colourless gas, its spectrum had to be obtained, so Ramsay and Travers applied a few thousand volts to neon gas in a glass tube, exposing an orange/red light. This was the first time a glow like this had been seen, inspiring Ramsey into naming it ‘Neon’, Greek for ‘new’.

0.0018% of the Earth’s atmosphere is comprised of neon; it’s a relatively rare element here on Earth. But this isn’t the case in outer space, where neon is the 5th most abundant element in the Universe after hydrogen, helium, carbon and oxygen. Neon is light, stable and unreactive hence there are no known neon compounds. Consequently, to obtain neon, you need to refine liquefied air using fractional distillation. However, 88,000 lbs of liquefied air will only give 1 lb of neon! Because of its rarity, liquid neon is 55 times more expensive than liquid helium. Neon signs themselves can cost anywhere in the region of hundreds of pounds to thousands of pounds, depending on the size.

We all know I love ending with a good element related joke, but I hate telling noble gas jokes. I never get a reaction!