Here’s something surprising: a cheerful piece of healthcare news.

The long-awaited results of the Pan-Cancer Analysis of Whole Genomes were released last month; a paper in Nature detailed analysis of over 2600 whole cancer genomes from almost 40 types of cancer. Besides the flagship paper, over twenty other papers appeared in Nature and elsewhere, each concerning a different aspect of the analysis. The scale and scope of this project is immense. It represents the joint work of the International Cancer Genome Consortium and the Cancer Genome Atlas Research Network, uniting researchers with nearly 750 affiliations across 4 continents. This is particularly impressive in a field in which international collaboration is notoriously challenging.

The papers themselves are pretty ground-breaking stuff, too.

Before proceeding any further, it’s important to understand that much of the human genome doesn’t code for any proteins. Instead, it’s made up of non-coding DNA regions called introns, which are removed during the process of converting the coding DNA regions, exons, into amino acids and, later, proteins. They’re important in regulating gene expression and in alternative splicing, which is the process of generating different proteins from a single gene and is important in terms of providing variation for selection. Anyway, I digress.

Other studies of a similar nature have entirely neglected the introns, preferring instead to focus on the protein-coding exons; after all, it wasn’t so long ago that introns were written off entirely as “junk DNA”. But there’s a lot to be missed by forgoing analysis of these crucial regions of DNA. Of the 700-ish mutations identified as important for tumour growth, 100 of them were outside of protein-coding regions. When only the exons were analysed, about a third of cancer genomes had no identifiable cancer-driving mutations at all. When introns were included, this figure decreased to only 5%.  On average, genomes contained 4-5 cancer-causing ‘driver’ mutations.

The researchers also identified many new ways to modify pathways of cancer growth; for example, one paper in Nature concerned the process of chromothripsis, in which chromosomes are literally shattered and rearranged, which is found to some extent in about 20% of tumours. 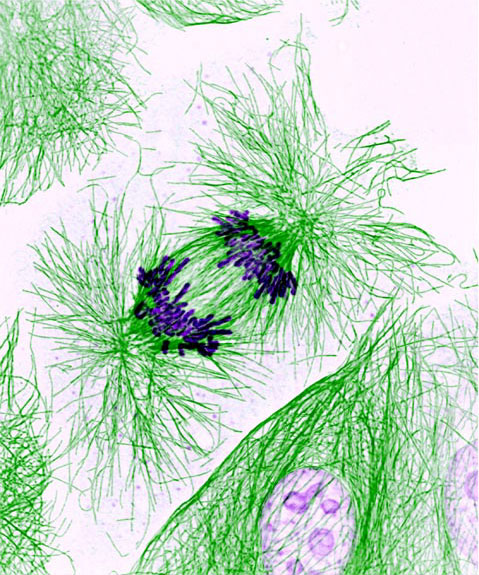 A dividing pig cell – in cancer, this normal process of cell division is broken. Image by Nasser Rusan, National Heart, Lung, and Blood Institute/NIH. Available on Flickr under Creative Commons 2.0 license. DNA-containing chromosomes are in purple and the microtubules which support the cell’s internal structure are green.

What was missing, in this study as in many others, was the clinical data. The sharing of clinical data on this scale is understandably fraught, but this leaves us, in a sense, with half of the story. The practical implications of clinical data are obvious: in a world where 50% of all cancers are preventable, it is vital to understand the association between particular driver mutations and particular lifestyle choices.

The first entry on the supplementary tables tells us about a female, aged 54. We get a swathe of details about the genetic basis of her recurrent ovarian tumours, but none at all about her lifestyle. Did she have children? Did she smoke? What did she eat? Did she work in a stressful job? We don’t know her, and we don’t know male-liver-seventy-three, or female-pancreas-fifty-nine, or, indeed, female-brain-four.

Cancer is a pervasive disease in the truest sense of the word. It pervades organs, and lymph vessels, and arteries and veins, and minds, and lives. There are well over a hundred thousand new cases of cancer in the UK every year. Nobody gets off lightly. Every single one of our lives has been touched by cancer, and yet we still find it difficult to talk about. Despite the amazing work of organisations such as Macmillan in encouraging us to talk about cancer, we still hush our voices, and change the subject, and refer to the ‘big C’ like it’s some sort of low-rent Voldemort. There’s a weird, oppressive sort of shame associated with talking about cancer.

Yet: cancer isn’t a death sentence, and shame doesn’t need to be a life sentence. As projects like the pan-cancer analysis bring us a step closer to understanding the many diverse diseases that fall under the heading of ‘cancer’, let’s allow conversation to help us better understand the people behind the diagnoses.