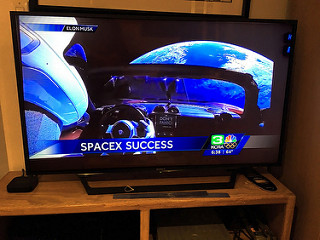 So admit it, who had the future having a cherry red Tesla Roadstar orbiting the planet whilst playing David Bowie’s Life on Mars on repeat whilst his Starman stares at the words ‘Don’t Panic’ on the dashboard, paying homage to Douglas Adam’s book ‘The Hitchhikers Guide to the Galaxy’.

When Musk launched his Falcon, he commented on his love for the idea of his car orbiting the Earth for a billion years, but a group from Cornell University Library have performed N-body simulations for over the next several million years to investigate what will happen to the Roadstar on its Space Oddity voyage and the conclusion that the group reached is that the repeated passages will initially be marked with close encounters with the Earth. 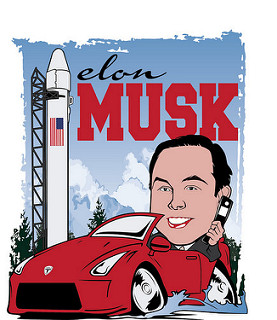 The first close encounter is expected to be in around 2091, yet this is just the first of many peculiar occasions that could occur. The report, compiled by Hanno Rein, Daniel Temayo, and David Vokrouhlicky goes on to say that the “repeated encounters lead to a random walk [which] eventually causes close encounters with other terrestrial planets and the Sun.”

The Canadians go on to be the bearers of more exciting news telling us the probability of a collision with Earth is 6%, a number that shouldn’t be too much of a worry but also it’s definitely a non-zero percentage so maybe watch your back occasionally whilst the chances of it crashing into Venus are a much more reassuring 2.5% meaning the safe option might be to just move over.

Yet much of the Tesla’s predicted orbital drift is to come from the- relatively- close interactions with the earth, albeit not close enough to cause impact damage- “the two objects have crossing orbits and will repeatedly undergo close encounters” with our home planet due to the fact that it started here, meaning it has tendencies to return, but until such a time as that happens, the Tesla orbiter is now just another near-Earth-orbital object similar to satellites- both natural and man-made.

The Tesla will also be impacted by the Yarkovsky effect, a small force exerted as a cause of the car’s rotation, the side which is facing the sub will absorb heat and the side facing away will be emitting heat and thus over prolonged time periods it’ll have noticeable effects on the orbit of the Tesla. This is due to the fact it possess a relatively high ratio in terms of surface area to mass, leading to the conclusion by the team of that, “a reasonable estimate for the strength of the Yarakovsky effect is ~0.05 AU/Myr,” or in layman’s terms, 0.05 Astronomical Units per Million years or a rough conversion to 7.5million km- an astronomical unit being the average distance between the Earth and Sun thus used as a common measurement in Astrophysics.

Yet despite an estimate of getting close to the Earth 48 times over the next thousand years, we expect “the orbits [to] diverge after an encounter in the year 2091,” meaning that we are expected to be safe after those final encounters before leading to potential collisions with Mars and maybe even the sun.

So whilst Elon Musk has claimed that we’ll have his Tesla orbiting the planet for a million years, the pedants have taken this claim seriously and decided to disprove his fantastical claims, as if the fact the sci-fi nature of what he’s managed to do isn’t ludicrous enough. Yet if you see a Tesla Roadstar falling out of the sky anytime soon, don’t be too surprised, you have been warned.