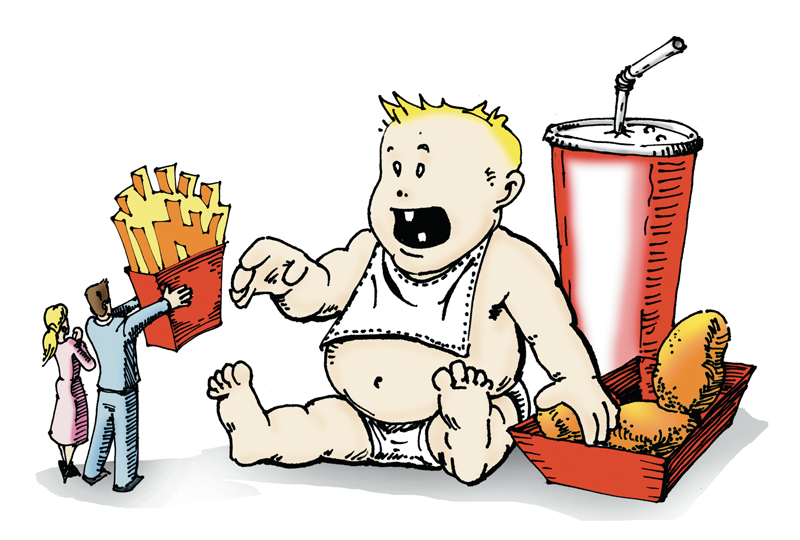 Parents are fuelling the fire of an obese generation.

It is estimated that 1/3rd of children are obese by the time they leave primary school. That’s a scary thought, but somehow not surprising. Unhealthy food is cheap, accessible and convenient – it’s no wonder busy, time-constrained parents are choosing easy options over healthy home cooking. But who is to blame for this obesity epidemic, which is fast becoming a national health problem?

To pique your interest watch Channel 4’s ‘Junk Food Kids: Who’s To Blame?’, it’s a real eye opener as obesity is more rampant than you think (I watched the majority of it with my jaw in my lap). 13 year old Pavia, who is 19st, is a typical teenager. She’s rude and unresponsive to her mother’s attempts to get her to go the gym and eat a piece of fruit, with the remark that “fruit is overrated”. You can’t help but feel for her mother. She is trying her best and feels guilty, even partly responsible for her daughter’s health problems. Despite her mother’s efforts, the unhealthy lifestyle that’s been entrained into her body is irreversible, Pavia has picked up habits that are impossible to shake off. This is what makes childhood obesity so dangerous: the developing brain soaks up obesity-fuelling behaviours that are difficult to completely eradicate, like any other addiction.

The ongoing problem seems to be that ‘teenagers will be teenagers’ and can’t put into perspective the severity of obesity. It has become so common that they don’t care anymore as they’re not the only ones their age that are overweight. “Don’t be daft, I’ll be fine” says Pavia. It makes you wonder if teenagers really understand the consequences of obesity. Have they been told so many times that it now falls on deaf ears? It’s comical to listen to the excuses parents can conjure up for their children being so unhealthy: “it’s something to do with thyroid”, “shops are to blame”, “it’s custard” are just a few that should be noted with some initial amusement. But then we should ask why parents are coming up with such daft explanations. Maybe they feel so out of control that they cannot effectively manage their child’s diet. A programme such as this is entertaining because you can see the delusion in parents’ eyes as they struggle to find an answer for their child’s (and most often their own) obesity. However, the fact that they’re resorting to blaming shops and their own malfunctioning bodies provides a sign of desperation. They don’t know what to do, this is an epidemic and I sense that they know it.

Another major issue the programme draws up is that of tooth decay in young children, which is frustrating the UK’s dentists. In North England 50% of 5 year olds have tooth decay. The fact is parents aren’t teaching their children to brush their teeth properly, or at all, and giving them too many sugary foods that destroy their baby teeth. The Leeds Dental Institute removes 200 baby teeth every week, which is incredibly costly to the NHS, as a toothbrush costs all of £2 and decay is 100% preventable. As with obesity, tooth decay is giving children the wrong attitude regarding their health and diet that is easily fixable with surgery. Parents also seem to be latching onto this as well. Those featured in the programme clearly have not learned their lesson, after sending one child off to have teeth removed only to return a couple of years later with another child with the same problem. The surgery is harsh, with children that cannot yet form sentences going under anaesthetic, leaving them with a blackened out and gap-ridden mouth. This is leaving children with lingering psychological impacts and a bad association with dentists, something which will do little to improve their dental health in the future, and that of their own children. A cycle is emerging.

Besides the major effects of obesity, including type II diabetes, heart disease and stroke, we must consider the psychological and social impacts. Depression, anxiety and low self-esteem are common among obese adults, so imagine how children are affected by their own body dissatisfaction from such a young age. Instead of being taught to live a healthy lifestyle, they are plagued by their own negative body image and are more likely to be unsociable, have fewer friends and become reclusive, leading to major mental health problems. It’s important that obesity is targeted early on, if not it may be too late to save a child’s mental health where negative associations of food and body image are already imprinted in their mind, setting them up for a miserable adulthood.

Is bariatric surgery the solution? Obesity costs 38 billion a year, which will bankrupt the NHS in the future. We can’t afford to give every child a way around dieting and exercising. Moreover surgery radically and unnaturally alters the digestive system. Fitting a gastric band involves placing an inflatable ring around the upper stomach to create a small pouch. This reduces the amount of food that can enter the stomach over a particular time, and gives a sense of fullness through the release of a protein called peptide YY, which acts on the brain to reduce appetite. Gastric bypass surgery to me seems the most drastic treatment option, as it reduces the volume of the stomach by 90%. The stomach is divided up into a small and large pouch, and the jejunum (part of the small intestine) is connected to this smaller pouch. When a patient eats this small pouch is filled up quickly and the smooth muscle of the stomach wall stretches, causing hormones, such as obestatin, to be released and to signal to the brain a feeling of satiety. Further complications following surgery include gallstones, removing excess skin and development of a food intolerance, costing the NHS even more money. Moreover, many patients go on to suffer depression as they often will have built up an emotional relationship with food which is no longer sustained with such a reduced food intake. Do people fully realise and accept that they’re wasting potentially life-saving NHS money on something which is totally preventable?

Not surprisingly obesity is more common in deprived areas. This should be a red flag for the government, do we need to make healthy food cheaper? Is that even possible? To complicate things further the rise in ultra plus sized models such as Tess Holliday aren’t helping. It’s great that she’s promoting body confidence and is attempting to do away with the view that models can only be stick thin and on the verge of anorexia. But this is almost hypocritical, size 0 models aren’t healthy but neither is she at 20 stone. She’s creating another problem amidst the epidemic by normalising obesity. This can’t be helping obese teenagers who look up to her as a role model, because being fat must be okay if you can become a model for it.

In my opinion it does all come down to parenting. I appreciate the fact that every case is different and some children may have a genetic predisposition to obesity but that cannot be accepted as an excuse. Just as those with any other long term medical condition learn to live with it and manage it in order to not let it get out of hand. Doctors throughout the programme remark on parents’ inability to control their children. Instead of facing the problem, they give in to avoid confrontation and hand their child a lollipop to shut them up. So maybe the answer is not radical weight loss surgery, but parenting skills and education. Parents need to realise that their child’s future is truly in their hands and that childhood obesity is so easily preventable but yet so difficult to control once sparked off.