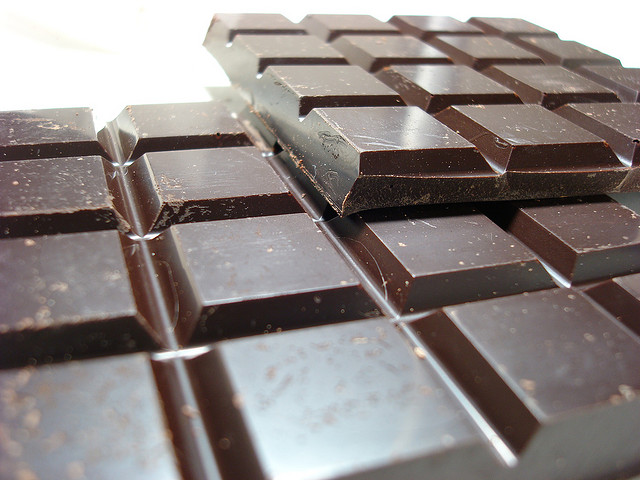 Anyone fancy a bar?

It is hard to disagree that chocolate is one of the most craved foods in the western world and as summative season approaches many students feeling the pressure will be tempted to break open a bar of Dairy Milk… and another… and another to get them through that essay. But, as the stronger willed amongst us attempt to cut this sweet treat from their diet for Lent, it is worth asking how difficult a task that really is. Is giving up chocolate for 40 days really just a test of willpower, or are there more potent chemical forces at work – is chocolate addictive?

Much research has been carried out into the origin of chocolate cravings, yet, despite this, conclusions are still very uncertain. It is clear that cocoa contains a variety of different biologically active molecules, including the stimulant caffeine and its weaker relative theobromine. These substances act as stimulants in two ways. Firstly, by blocking adenosine from binding to receptors in the brain which promote sleep and suppress arousal, and secondly, by catalysing the release of adrenaline. As the regular coffee drinker will testify, caffeine is widely known to have addictive properties; however the concentrations found in chocolate contribute very little to the daily intake of this substance. Whilst theobromine has less effect on the central nervous system and brain than caffeine does, it is a stronger cardiac stimulant and has been suggested to be the source of chocolate’s reputation as an aphrodisiac.

In such small concentrations, individually these two compounds are unlikely to account for any addictive properties which chocolate may have, however, a third chemical also found in chocolate, anandamine (whose name is derived from the Sanskrit for bliss or pleasure) is known to interact with caffeine and theobromine to produce a noticeable sense of well-being. It is therefore possible that the physiological changes caused by these chemicals could lead to addiction.

Studies have shown that brain activity patterns in people who identify as chocoholics are remarkably similar to those seen in drug addicts. As well as a heightened sense of well-being whilst eating chocolate, chocoholics can experience episodes of overeating if the sugary snack is withheld, consistent with relapse. Animal studies have also shown that restriction of foods with high sugar and fat content, which trigger reward pathways in the brain, can cause a stress-like response, consistent with withdrawal symptoms.

Another likely cause of chocolate cravings is eating as a form of self-medication for deficiencies in the body. Cocoa contains very high concentrations of magnesium, and in some cases it has been found that magnesium capsules can subdue cravings for chocolate. Magnesium deficiency is a contributing factor to PMS, which has also been linked to increased chocolate consumption among women. A lack of magnesium causes low levels of dopamine, a neurotransmitter responsible for feelings of euphoria and satisfaction. It is thought that dopamine may be the key molecule in understanding addiction as its levels in the brain are increased by any kind of ‘reward’. Similarly to caffeine though, chocolate is not the only major source of magnesium in our diets, with many nuts containing comparable concentrations.

Although there are many possible chemical reasons for chocolate to be addictive, it is very unclear why cravings are so specific, when the potentially addictive substances are also found in many other foods. It is likely that the answer lies at least partly in the act of eating chocolate itself and the delicious, rich and creamy textures, tastes and aromas that go with the experience. After all, milk chocolate is often more sought after than its darker cousin, despite containing less of the biologically active ingredients. Aside from the rich flavour which originally attracted the Aztecs to the ‘food of the gods’, chocolate has one key difference from other high sugar, high fat treats – it is the only food which melts at body temperature, giving that melt in the mouth sensation that is impossible to get anywhere else.

So, for those of you struggling to contemplate lasting the remainder of Lent without a bite of your favourite snack, there is some good news. Your efforts are not in vain. Chocolate is, almost certainly, not addictive. Having said that though… rather you than me!