On genes, ancestry, and why we’re all descended from royalty

Today, the media landscape is punctuated by stories of celebrities with claims of royal ancestry, having traced their lineage from notable figures through history. The promise of companies such as ancestry.co.uk, BritainsDNA, or 23andMe is simple: anyone can spit in a tube and have the secrets of their origins revealed. People love to declare their “part Viking” heritage, or direct descent from Roman legions. Unfortunately, most of these claims are little more than pseudoscience; they were even referred to by The Guardian as “genetic astrology”.

Of course, there’s nothing wrong with having a bit of curiosity about your ancestry, and DNA testing has revolutionised the ability to trace long-lost relatives or follow human migration patterns across the globe. The problem, however, is that a lot of what these companies are telling you is pretty obvious and nonspecific, if you stop to think about it. Everyone of European descent possesses Viking ancestors. In fact, I can assure you with complete confidence that every individual on Earth is descended from kings and queens multiple times over. 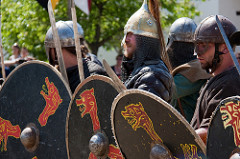 All white Europeans are descended from Vikings.

“This is merely a numbers game,” geneticist Adam Rutherford writes in his acclaimed book ‘A Brief History of Everyone Who Ever Lived’. For every generation we go back, the number of ancestors belonging to each individual doubles: we have two parents, four grandparents, eight great-grandparents, sixteen great-great grandparents, and so on.

By this logic, if we go about 40 generations back to 800 AD, every individual would have 1,099,511,627,776 (240) ancestors alive at the time. However, estimates of the entire world’s population in 800 AD are around 200-300 million, so how can this be? The answer lies with the fact that we are all descended from the same individuals many, many times over. Family trees are not separate, orderly units, but branch and mesh and collapse in on themselves, amalgamating fewer individuals as we travel further back through time. The takeaway is that all humans are actually a lot more closely related than we might assume.

It’s even possible to determine when the most recent ancestors of everyone on Earth were alive. In the 1980s, a group of researchers from Berkley, California studied the mitochondrial genomes of women from all over the world. Mitochondrial DNA is particularly useful for studies of ancestry, as it is passed exclusively down the female line; the mitochondria in sperm are found in the tail, which never enters the egg during conception. Therefore, only the mother’s mitochondrial genome is passed on to the offspring. By comparing changes in the DNA base sequences, they were able to determine the most recent maternal ancestor of all humans: ‘Mitochondrial Eve’. This individual was born in Africa between 150,000 and 250,000 years ago, and everyone currently alive is her descendent.

It is important to note that ‘Mitochondrial Eve’ is not our most recent common ancestor overall, but is our most recent common ancestor purely from the female line. As noted by evolutionary biologist Richard Dawkins in ‘River Out Of Eden’, “… there are lots of other ways [to be] descended from people than… the female line. Millions of other ways.” Look at it this way: of your sixteen great-great grandparents, you are only descended from one of them down the purely female line.

So what about the most recent common ancestor down every possible line of descent? Statistician Joseph Chang engineered a mathematical model to find out. The model carried out calculations using the number of ancestors each individual possesses and the current population size, while taking into account the fact that people usually reproduce within socio-economic groups and geographic areas. He concluded that the most recent common ancestor of everyone alive today lived somewhere in Asia, only 3,400 years ago.

Chang also calculated that everyone of European descent has a common ancestor who lived as recently as around 600 years ago, at the time of Richard II. Bearing this in mind, stories of Danny Dyer’s descent from William the Conqueror and Edward III, or Christopher Lee’s direct ancestry to King Charlemagne seem like hollow claims. Yes, they probably are descended from these prolific figures, but so are all other white Europeans. To add to the redundancy of such assertions, Danny Dyer may possess all of William the Conqueror’s genetic material or none of it, as may anyone.

And so it appears that claims of distant royal descent are ultimately meaningless. DNA testing websites may provide you with invaluable information about your family history or heritage, but if you’re already pretty certain of your recent descent, it’s probably not worth the £79. Perhaps, therefore, one might conclude that our shared ancestry makes many of us less remarkable or unique, but I prefer Chang’s view:

…our findings suggest a remarkable proposition: no matter the languages we speak or the colour of our skin, we share ancestors who planted rice on the banks of the Yangtze, who first domesticated horses on the steppes of the Ukraine, who hunted giant sloths in the forests of North and South America, and who laboured to build the Great Pyramid of Khufu.