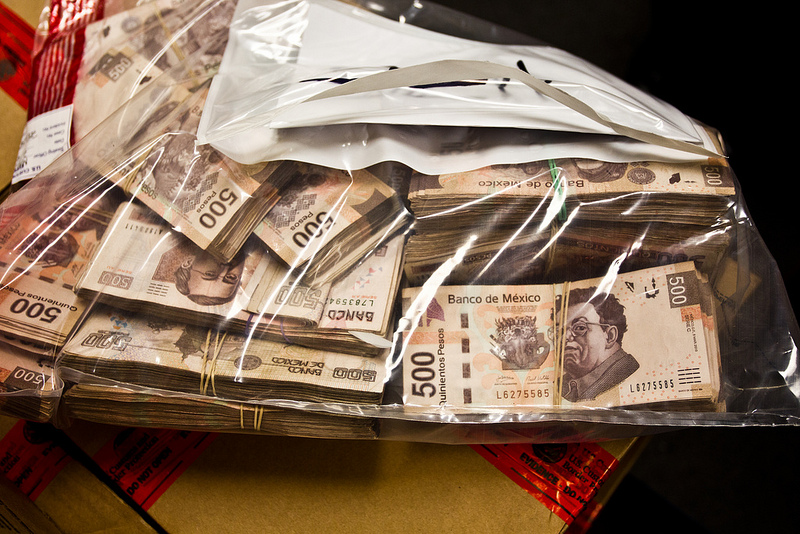 How can chemistry help us spot real notes from the fakes?

Long gone are the days of crooks shaving their coins and forcing together the metal dust to create easy but illegitimate money. The more valuable route is to create fake notes, typically of much greater value and, at first glance at least, a much easier feat. Thankfully (at least for those with a conscience), cunning measures are at hand to stop would-be counterfeiters pulling a fast one.

The counterfeit money pen – the modest weapon at the disposal of till staff across the country, ready to scribble across that unlikely £50 note – makes use of very simple chemistry to tackle the very simple minds within the counterfeiting world. For those who have never been caught with a fake banknote, the pen should leave behind a clear trail on a legitimate note, but turns a very dark blue-black on certain illegitimate attempts. Why? Because the fake banknotes here contain starch, and the content of the pen is simply an iodine solution. Real banknotes are not made from standard wood-pulp paper, which is rich in starch, but instead from cotton and linen. How does the iodine solution detect starch? Rather than simply containing standard diatomic iodine, I­2, the solution also contains the triatomic I3– molecule. This molecule is linear, and capable of slotting into the coils and spirals found in starch molecules. This is the process that ultimately gives rise to the, for-many-a-crook, embarrassing stain on fake notes.

Of course, not all counterfeiters are as naïve as to think money is just simple paper. In fact, counterfeiters are known for their wily ways and are capable of producing unfortunately difficult-to-distinguish copies. (If on holiday you have ever been confronted with criminally (literally) cheap designer goods, I am sure you have been more than tempted to roll with it.) Provided their fake cash is not on starchy paper (and provided it looks believable to the human eye), it is likely that fake money will not be stopped by the retailer with his or her yellow iodine pen.

However, the good guys are one-step ahead and use much more subtle means to distinguish real notes from fakes. Scrutinising any note, you are instantly going to see the complexity in the design and features, including watermarks and holograms, making the production of notes complicated and awkward. However, chemistry goes one step further; within euro banknotes you will find none other than element 63, europium.

Europium exists in that slightly awkward block floating below the bulk of the periodic table (the f-block), and like its neighbours, is linked to luminescence. Luminescence embodies the terms fluorescence and phosphorescence, describing processes by which a species absorbs light of a given wavelength (and so a given energy) and emits light of a lower wavelength (and so lower energy). The difference between the two is that phosphorescent materials will continue to emit light for a short time after the trigger light source has been removed. Typically, in these situations, ‘antennas’ are bolted onto the luminescent atoms to help capture the light, but the energy is partially lost through vibrating and rotating of bonds and atoms, so by the time energy is emitted, the corresponding wavelength is lower. This means that UV light might go in, but red (in the case of europium) will come out.

So, shining UV light onto a euro note will reveal an impressive collection of hidden symbols and new colours, all resulting from fluorescing europium and other lanthanides. It is unlikely any aspiring counterfeiter would have ready access to the rare earth elements, as well as the knowledge of how to use these to match actual banknotes. If they did, they could have used the time and effort in researching it to just get a good job and earn an honest buck. Indeed, the specific details around the chemicals used in the banknotes are, of course, a secret, and probing could be construed as an attempt at something more serious than learning about chemistry!

This is just the start when it comes to luminescence. From the postal industry and stamps to nature and flowers, this same sort of science is seen (provided you have a UV light!) everywhere, which really begs the cliché (sorry…), that there is more to life than meets the eye.