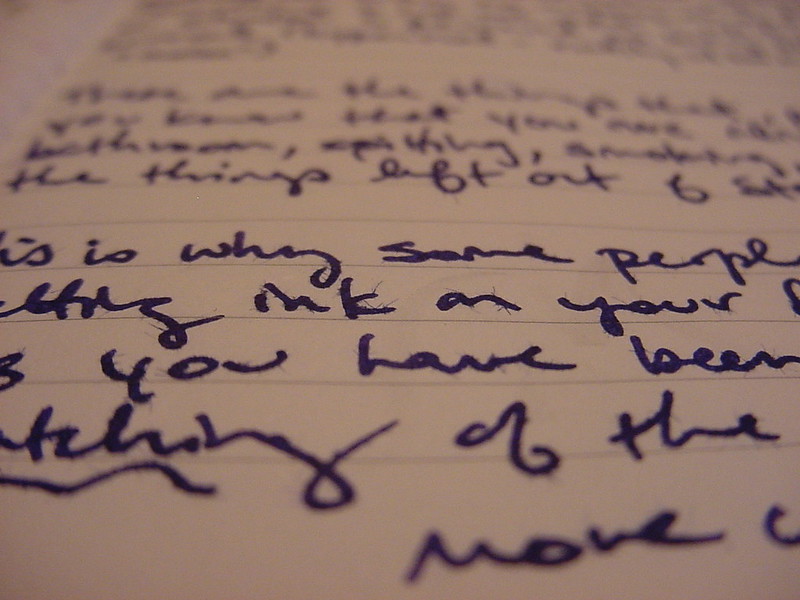 Nothing is static. Everything we see is flying about at incomprehensible speeds. The objects we touch, the things we look at that are seemingly stationary are vibrating and moving as the atoms within them jostle in space. The way these particles fall into place has a profound impact on how the simple, everyday objects around us function. Let’s start with ink.

We use ink for such a wide variety of things, from writing a novel to getting a new tattoo. Ink has become a fundamental and extremely useful part of modern life, it is almost impossible to imagine our lives without it. Despite technology evolving and thus the creation of devices such as the Apple Pencil, ink used in pens may be traditional yet it is still avidly used. Simply being a ‘pen and paper person’ is seemingly not yet on its way out.

The history of ink is extremely fascinating. It originates 4500 years ago and was invented by both the Chinese and Egyptians at around the same time. Original experimentations by an inventor from China named Tien-Lcheu got creative with pine tree soot and lamp oil to create a mixture. Gelatin from the skin of a donkey was then added to resemble black ink. Ancient Egyptians used lampblack, a kind of soot, to make the ink which they then used the for drawing and writing.

There are a multitude of types of ink, from well-known pen ink to erasable ink and tattoo ink. Marker pens come in four types of ink: pigment, water, oil and alcohol-based. Traditional paper requires pigment and water based markers and oil and alcohol-based markers are for non-paper materials (such as plastic, glass or metal). There are a variety of painting inks such as acrylic inks which are used for calligraphy, watercolour and stamping.

Iron gall ink or ‘standard ink’ is a black ink made from tannic acids and iron salts – it is still sold today. Traditionally, the ink could be prepared by adding some iron sulfate to a solution of tannic acid (found in plant tissues). This produces a soluble tannate complex and since it is soluble, the ink can penetrate the paper’s surface, making it almost impossible to erase. Iron gallate forms as glucose and gallic acid are released, giving the solution a dark purple-black colour. The darker the ink, the more well-prepared it was. Despite this being an effective ink in practice, it is an acidic mixture where the ink would easily bleed through the paper. This is accelerated through increases in temperature and humidity.

There is conservation to try to protect pages of historical writing that use iron gall ink. Corrosion poses as a risk to this ink. Corrosion is caused by acid catalysed hydrolysis and iron(II)-catalysed oxidation of cellulose (Rouchon-Quillet 2004:389). Papers are immersed in items calcium phytate solution, to bind and isolate damaging iron(II) ions. The state of the damage is assessed before being categorised on a scale of one to four, with four being extreme damage to the ink on paper.

A more modern use of ink is in colourful gel pens. These pens use a pigment which is suspended in a water-based gel. The pigments are opaque and generally have a higher melting point viscosity when compared to other inks.

Tattoo artists in Europe are fighting a new ban on two commonly used green and blue pigments. Certain chemicals in tattoo inks are said to cause cancer, damage DNA or trigger allergic reactions. The EU is calling for the inks Blue 15:3 and Green 7 to be completely phased out due to these health concerns. Ines Screiver from the German Federal Institute for Risk Assessment said that the two inks have a “comparatively low level of toxicity” after examining them.

In the future, we can expect to see more environmentally-conscious inks being produced. For example, UV (ultra-violet) based inks do not have harmful emissions unlike solvent inks, and they have low heat requirements and low energy consumption which is beneficial for the environment. Also, this ink can print directly onto substrate.

As we can see, ink is constantly evolving over time – new, more environmentally-friendly and creative inks are still yet to come.