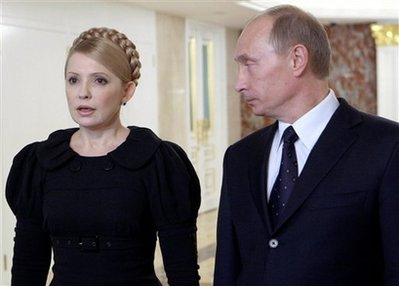 Whilst Putin’s Russia has remained stable, Tymoshenko has proved to be an incapable leader.

In a devolved Scotland, a revolution has taken place in Edinburgh with support from the north of the nation. The country is plunged into chaos; various authorities claim to hold power; law and order breaks down. Alex Salmond has been deposed, replaced by an opportunistic conglomeration of idealists, nationalists and fascists advocating a complete divorce of power from the rest of the United Kingdom, and spouting anti-British rhetoric. Constitutionality, legality, and political norms carry no weight within this newly formed government as previous agreements, signed by those very leaders who are now in power, are torn asunder and forgotten.

The population in southern Scotland is concerned. In stark contrast to the situation in Edinburgh, people here want closer ties to the rest of the United Kingdom, many were born or raised there and their livelihoods are intrinsically linked to events south of the border. Such is the lawlessness and chaos engulfing the region that they ask for support from their neighbours to the south. London, equally concerned, agrees to deploy forces to maintain law and order and protect her interests and citizens in the region, worried that the disruption will spill over and keen to uphold constitutionally binding agreements.

This is, of course, a farcically hypothetical situation, and still only bears the scantest resemblance to what is currently unfolding in Ukraine. Still, when a similar crisis is placed on your doorstep, it’s interesting to note how one’s viewpoint changes. Similarly, Russian coverage of the crisis in Ukraine unsurprisingly differs markedly from its western equivalent.

The Ukrainian “government” (and I use the term lightly to describe the hastily-assembled rabble of chancers currently presiding over affairs in Kiev) does not represent the whole of Ukraine. Voting statistics from the 2010 election are starkly demonstrative of the split in Ukrainian politics: The eastern part of the country, where Russian is commonly the mother tongue, voted overwhelmingly for the Russia-leaning candidate Viktor Yanukovych, whilst the western half, where Russian is eschewed, voted overwhelmingly for Yulia Tymoshenko. Indeed, one of the first actions of the new Ukrainian government after the coup was to repeal the official recognition of Russian as a regional language in an act of nationalist West Ukrainian chauvinism which would ordinarily provoke the rightful indignation of the EU and the US.

Both Yanukovych and Tymoshenko are repulsive characters – the former a corrupt placeholder, and the latter an opportunistic demagogue, ineffective as a national leader. Nevertheless, Yanukovych is the rightful president of Ukraine and has been illegally deposed by a violent coup d’état, unrepresentative of the will of the country as a whole.

Russia recognises that Yanukovych is politically bankrupt. However, by not following the correct procedures for impeachment, the legal process to remove him from power, he remains the constitutional head of the Ukrainian state and consequently he must be involved in any negotiations about the country’s future. Indeed, the much-heralded agreement of 21 February, which was signed not only by Ukrainian opposition leaders, but by the foreign ministers of France, Germany and Poland, has been conveniently forgotten in the West and demonstrates yet further the brass neck of the Ukrainian opposition, willing to sacrifice constitutionality and due process in favour of capturing the momentary support of a frenzied crowd, whipped up by irresponsible populist rhetoric and impossible promises. As soon as it became apparent that the Maidan protestors were unimpressed by the agreement signed by their opposition leaders, said leaders quickly disassociated themselves from it and failed to abide by the terms they had themselves negotiated only a matter of hours earlier.

What kind of political system is this? How can the West place its trust in populist demagogues so willing to betray their word? How can stability be established when the government itself is lawless?

Looking at recent revolutions, the Russian concern for due process becomes convincing. Revolutions in Tunisia and Egypt, and even the Orange Revolution in Ukraine have quickly segued from euphoria to disaster, disorder and despair. The West, so supportive in the good times, is nowhere to be found when the going gets tough and, in the case of Ukraine, it is Russia that is left to pick up the pieces.

As a consequence of this coup, the West now seeks to negotiate with Russia on the future of Ukraine from the viewpoint of Yanukovych’s deposal as a fait accompli: the new government is considered legitimate, previous agreements have lost their currency. Russia upholds the constitutional legitimacy of Yanukovych as head of state, at least until elections can be held as scheduled in the aforementioned 21 February agreement. Sensing a geopolitical opportunity to further divorce Ukraine from Russian influence, the West has moved to ignore concepts of legitimacy and constitutionality, in so doing fostering further chaos and lawlessness.

It is in this context that Russia supports pro-Russian militias in Crimea, and reserves the right to send in her own troops in the capacity of peacekeepers. Unlike the US and the UK, Ukraine borders the Russian Federation and instability and chaos naturally spill out across this border, something which the Russian people are desperate be kept to a minimum. Like all responsible states, Russia resents chaos.

In the same way that the western media disproportionately focussed on peaceful, butter-wouldn’t-melt Maidan protestors rather than filming the violent fascists (and now government ministers) setting about the destruction of Kiev, the western media has portrayed the presence of (supposedly) Russian troops in Crimea as being to the chagrin of many Ukrainians in the region.

As the Crimean government has affirmed, and as I am sure will be borne out in the forthcoming referendum, the people of Crimea want the pro-Russian militias to carry on their activities; they themselves want closer ties with Russia, to join the Russian Federation itself. Pictures of smiling militiamen posing with Ukrainian citizens are awash in the Russian press, and although just as one-sidedly misleading as the images used in the western press, they do suggest a greater support for Russian intervention than is being portrayed in the West.

And again we return to the issue of constitutionality. In this instance, the West rails against Russia’s apparent transgression of the Ukrainian constitution, decrying the illegality of their intrusion. Only now does the constitution and the legality of actions in Ukraine have any importance in the West. The legitimacy of western involvement in the sovereign states of Afghanistan and Iraq is kept conveniently quiet on this score. The West cannot, I’m afraid, have its cake and eat it too.

What is needed is a greater degree of trust. We find ourselves mired once again in a Cold War mind-set; a zero-sum game.

Russia does not want instability in Ukraine any more than the West does. If the neo-imperialism of the EU and the US were to be reigned in, Russia would be less concerned about preserving her influence by whatever means necessary into Eastern Europe. It is only the insatiable appetite of the West to extend NATO and isolate Russia (her greatest fear) which creates the necessity for Russia to rattle her sabres and cement her influence. It is thus western fomentation and sanction of coups and chaos in Ukraine which has necessitated Russia’s reasonable response.