We have heard it over and over: ‘all politicians lie’. It has by this point become a bit of a national joke. In the last two weeks the Conservative party has been caught setting up a fake fact checking service and a website claiming to contain the labour manifesto, which was instead full of Conservative propaganda. Yes, the lying has now become so meta that politicians are literally setting up fake accounts to try to convince the British public that they hold any kind of truth. The Liberal Democrats this week have also been caught distributing fake newspapers with similar names and appearances to local newspapers. 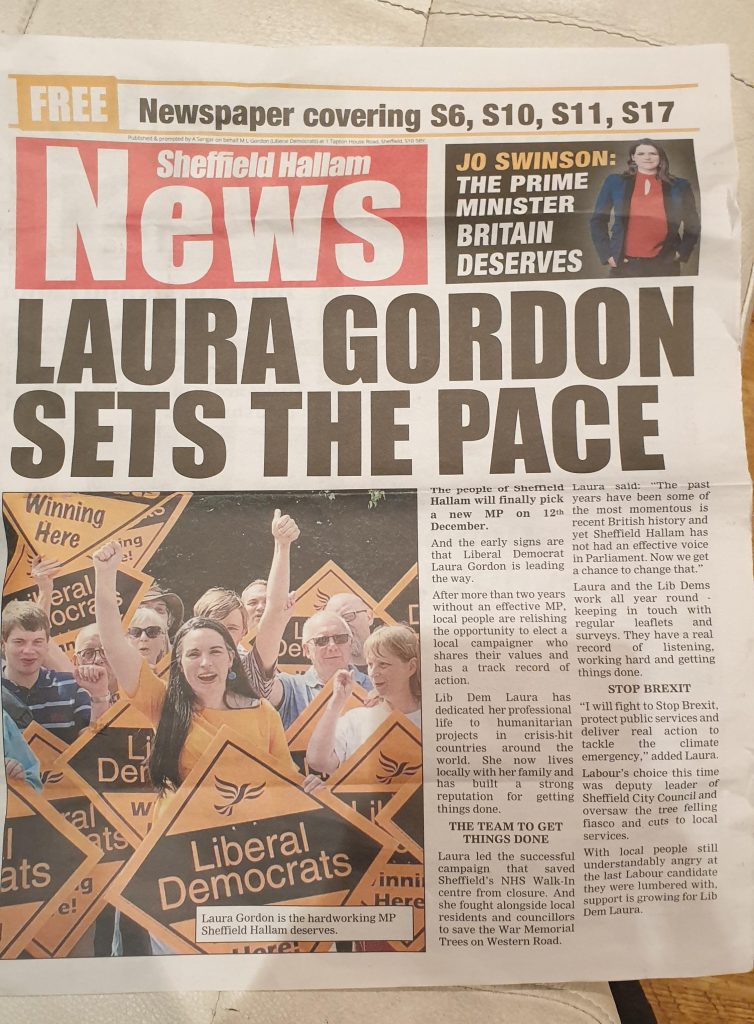 Liberal Democrat leaflets designed to look like a local paper.
Picture by Laura Gordon, Available on electionleaflets.org in accordance with the Public Domain Dedication

But where is the outrage? It’s being reported on, true, but there is a legitimate air of benign acceptance. Politicians lie, but we shouldn’t take them seriously, it’s just to be accepted, right? But it is one thing to make somewhat ill-intentioned promises and another to be accused of lying in office; something our Prime Minister Boris Johnson was alleged to have done whilst London Mayor. Although the court case filed against Johnson was thrown out, it was not because the claim was unfounded, but only that it was not technically illegal.

In light of all this, is it possible to believe the campaign promises of any party in this upcoming election? The labour party is also under fire with claims that leader Jeremy Corbyn is allowing anti-Semitism to thrive within the labour party. With this election, perhaps, being one of the most significant elections in the last few decades, knowing who to vote for is important but becoming increasingly difficult. It has been three years since the 2016 Brexit vote, and those three years have seen the public, and especially students, become increasingly disillusioned with politics.

Despite this, the 12th of December is coming up fast and, regardless of political disillusionment, it is still important for students to vote because, if the student voice is not heard on the ballot, it will never be heard in Westminster. In light of this, it may be necessary to settle for a ‘best fit’. So, in brief, what are the parties offering in their manifestos?

The Conservative party manifesto is somewhat brief and at points non-specific – they promise extra funding for the NHS but do not specify how much. They do, however, promise 50,000 more nurses and 50 million more GP appointments per year. They also promise ‘millions more’ to be invested per week in science, schools, apprenticeships and infrastructure. In regards to the environment, the Conservative party aim to reach net-zero by 2050 through investments in clean energy solutions and green infrastructure. The Conservative party will not be raising the rate of Income Tax, VAT or National Insurance. The Conservatives also plan to implement a point-based system of immigration similar to that of Australia.

The Labour party manifesto is lengthy and makes a vast number of promises. The party’s Brexit stance is not wholly clear, with Jeremy Corbyn continually refusing to comment on whether he supports Brexit or not. They are, however, promising a second referendum within six months of their election with remain on the ballot paper along with a new deal renegotiated by Corbyn. In regards to the NHS, they are promising to end privatisation and increase expenditure in the health sector by 4.3% per year. Also significant is the promise to give an additional 1.6 billion per year to mental health services. This will be paid for from an increase in corporation tax and an increase in taxes for the wealthy. Labour also plan to renationalise the water, energy and mail services and deliver free fibre broadband to all. The party also claims that they will aim for carbon neutrality by 2030.

The main aim of the Liberal Democrats is to stop Brexit and reinvest the 50 billion Remain Bonus in public services and the tackling of inequality. The party plan to raise 7 billion a year from a 1p rise in income tax to put towards social care, workforce shortages and mental health care. The Liberal Democrats are also promising an extra 10 billion a year for schools and 20,000 more teachers. The party also plans to generate 80% of electricity from renewables by 2030 and to insulate all low-income homes by 2025 with a plan to have net-zero carbon emissions by 2045.

Come what may, we are all going to have to vote come 12th December, and for most Undergraduates this will be our first opportunity to vote in a general election. Although total agreement and indeed trust in any party may be impossible, voting is the only way the student voice will be heard.