The Whips and Brexit: Lessons from Maastricht 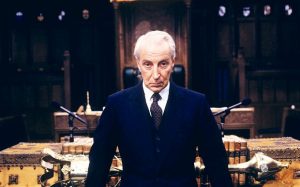 Ian Richardson as Francis Urquhart in the BBC’s House of Cards. Perhaps the most famous Tory whip despite being fictional.

The Conservative Party has often been seen to be on the cusp of disaster ever since their disappointing election last year. Every week there seems to be new grumblings of leadership plots against Theresa May. This has been seen just in the past week with Jo Johnson’s resignation over May’s Brexit policy. However, perhaps the closest May has come to toppling was late last month. Ahead of her meeting on the 24th October with the 1922 Committee of Conservative MPs one anonymous MP said she was entering the ‘killing zone’ and should ‘bring her own noose.’ Several MPs had also submitted letters of no confidence, according to Andrew Brigden MP, potentially leading to a formal leadership challenge.

However, when May met with the 1922 Committee, she went down a storm with the assembled Tories applauding her and thumping their desks. Much in contrast to the ‘killing zone’ promised one MP remarked that the room was a “petting zoo, not a lion’s den.” So, what had happened? Had May’s magnificent oratory won the room? Did her assassins have a change of heart? Perhaps both these possibilities were in play. However, there was another intriguing reason for why the meeting went May’s way. According to Nadine Dorries MP the meeting was “rigged by the whips.” The whips had apparently dispersed loyal MPs around the room to drown out the Prime Minister’s opponents and used WhatsApp to coordinate a show of support for her.

For many in the Conservative Party this must have set alarm bells ringing. They will all surely remember the last time a Conservative government had challenged its anti-EU right, the Maastricht debate in the 1990s, where the Conservative whips won a hard-fought guerrilla war against them. Like with the Maastricht legislation the current Brexit deal may very well struggle to get through Parliament and the whips will once again be the frontline troops in getting it passed. Thus, it might be worthwhile going back and looking at the tactics of the whips at Maastricht and look for both similarities and lessons that can be applied from 1992 to the situation in 2018.

In 1992 Major was in a much better position than May is now. He had been central to a surprise Conservative victory in the election that year when many expected Labour to sweep to power. He was also having some success on the European front. He had secured significant compromises on the Maastricht Treaty, getting Britain Social Chapter and Single Currency opt-outs, maintaining state control of foreign and defence policy and scrapping any direct reference to federalism in the treaty. However, he still had a mountain of opposition to climb to get Maastricht through parliament. In June of that year 84 Conservatives had signed Early Day Motion 174 which called for a postponement of the treaty and a ‘fresh start’ to Britain’s European policy. Major with a slim majority of 21 could only afford for a maximum of 28 rebels against his Paving Motion supporting the governments European policy, given he had the support of the majority of Liberal Democrats. Thus, with the need to turn 56 votes, one of the most dramatic and seismic whipping operations had to take place.

There were several approaches taken by the whips to flip votes for the government. The first and perhaps most effective of these approaches was their appeal to party loyalty from the rebels. Although Major publicly denied that the Maastricht vote was a vote of confidence the whips made it very clear to the rebels that they could be bringing down the government, and therefore potentially the party, by rebelling. Their appeal for loyalty was quite effective. For example, all five chairmen of the right-wing 92 Group of Conservative MPs, who opposed Maastricht, decided to side with the government reluctantly on the eve of the vote upon being persuaded by the whips that the government would fall if they voted against it. Indeed, it seems that this is what persuaded the majority of MPs who signed the ‘Fresh Start’ motion to back the government.

Where this tactic failed, or at least was less effective, the Whips in many cases took to what is known as the ‘dark arts’ of the Whips’ Office. The use of threats and harassment to crack the rebels which Sir Nicholas Winterton referred to as “arm-twisting, thumb-screws, persuasion and inducements.” Rebels complained that the whips threatened to reveal compromising material about their private lives to the press or halt any potential career advancements. Dr Michael Clark was threatened outside the lobby with the withdrawal of an invitation to a conference in Canada he was looking forward to. Perhaps most grotesquely, Teresa Gorman complained that she had been sexually harassed by the whips in their attempt to push her into the government lobby. It was not all stick and no carrot. Several young MPs were persuaded not by threats but by offers of Parliamentary Private Secretary positions. However, it was certainly the most brutal and controversial whipping operation in the history of Parliament with the whips going to the most extreme lengths to win the vote.

The final pillar of the whip’s Maastricht campaign was the centrality of John Major. The whips tried to portray him as a devout Eurosceptic who would protect Britain from the possibility of European federalism. He also met with MPs one on one to persuade them to his cause. Most significantly however, on the 29th October 1992 nearly 26 years to the day that May made her speech to the 1922 committee in Committee Room 14, he did the same thing. In a powerful speech to the party he tried to convince them to support the Maastricht Treaty, leading to a desk-thumping ovation from those present. This speech supposedly convinced several MPs to support the government and helped the government win the vote.

In the end, the government won the day by 319 votes to 316 with only 26 MPs rebelling against the party line, a far smaller number than the 84 who had supported the ‘Fresh Start’ motion just a few months before. This number had only been achieved just at the last moment with many MPs deciding to support the government as the vote took place. It paved the way for the creation of the European Union and ensured most likely the survival of the Major government. If the whips had not campaigned the way they did then it is possible that both these things may not have occurred.

Therefore, after discussing the Maastricht vote we can discuss the two important questions set out in this article. Firstly, can we see similarities with the whips 26 years ago in the Maastricht vote and those currently dealing with Brexit? Secondly, what lessons can the government learn from the Maastricht vote in the whipping campaign to achieve Brexit? In answer to the first question we can already see several similarities. As already mentioned like with John Major, the whips are doing their best to paint May as central to the success of both the Conservative Party and Brexit. The striking similarities between John Major’s and Theresa May’s meetings with the 1922 committee in October 1992 and 2018 respectively are uncanny. We can also see the issue of loyalty being used to get MPs to support May’s Brexit deal. Quite like in 1992, the Conservative Party’s position is precarious with a defeat in a future Brexit debate in the Commons potentially ruinous and a path again for Labour to come to power. Hence, we have seen plenty of appeals in the media over the past month for MPs to remain loyal and united to save the party. Finally, although certainly not as developed as it was in the Maastricht Vote, we can see the early signs of the ‘dark arts’ emerging again as a tool of the Whips’ Office. For example, a recent Business Insider article alluded to MPs being threatened with halts to their careers if they do not support the government. If this has already started now then surely when the government are faced with the moment of ‘do or die’ when a Brexit motion reaches the floor these tactics will become more intense. Although whether it will be as severe as the Maastricht vote remains to be seen. Thus, we can see plenty of similarities between the two whipping operations.

The second question, what can our current government learn from the Maastricht whipping operation, is perhaps even more interesting. On the one hand, May can take courage from Major’s success. He, with a limited majority and fierce opposition, managed to achieve his European agenda through his whips. Despite May’s situation being direr with only a minority government propped up by the DUP, she can take heart that in Maastricht against all the odds the whips won the day for the government. However, in the long run it can be argued that Major’s whipped vote was a disaster for the party. The whipping created divisions in the parliamentary party that last to this day. So alienated did the rebels feel from the experience that they never ceased hostilities with the Major government. It got so bad that Major had to remove the whip from nine MPs, essentially expelling them from the parliamentary party. He did this to try and teach them and others a lesson for their disloyalty, despite it effectively wiping out his majority. However, instead of begging for the whip back they created, in the words of Edward Heath, ‘a party within a party’ which became a thorn in Major’s side. Their actions eventually forced him to back down and let them back into the parliamentary party unconditionally. These splits contributed heavily to the tarnishing of the Conservative Party’s reputation which led directly to the Labour landslide of 1997 and the Conservative’s wilderness years. Even under David Cameron the splits created by the vote were still visible and certainly contributed to him calling for the EU referendum back in 2013 to placate the Eurosceptic wing of his party. Thus, even though May, like Major, could potentially whip a vote on her Brexit deal the splits it could create could have long lasting detrimental effects to the party. As one MP remarked at the time, the Maastricht vote ‘was like the Battle of the Somme . . . The Government has gained ten yards but at a huge cost.’