The first debate: an overview

This was a debate of two halves: Brexit vs. everything else. Both politicians attempted to shift the discussion to their favoured conversation topics — Brexit for Boris Johnson, the NHS for Jeremy Corbyn — wherever possible, only managing to do so in a way which appeared painstakingly awkward. The audience were readily laughing at both candidates at times, particularly when the issue of trust was brought up, which created an uncomfortable atmosphere. In the first debate since 2015 which has featured both the Labour and Conservative party leaders, it didn’t have quite the effect either leader would have hoped for, with Johnson failing to capitalise on and strengthen his lead in the polls, and Corbyn unable to catch up. Though described as “the most important general election of our lifetimes,” it was a far cry from the dramatic leadership debates of 2010, which saw Nick Clegg shoot up 14% in the polls as a result; perhaps this was a consequence of the exclusion of other prominent party leaders, such as Jo Swinson and Nicola Sturgeon, though neither would have been predicted to cause such a shift in the election polls.

Though ahead in the polls by a substantial 45% to 28% (according to a YouGov poll from the 15th of November), Johnson appeared to be preoccupied with bashing Corbyn wherever possible, referring to him personally in both his opening and closing statements, whereas Corbyn refrained from doing so, impersonally mentioning the “Conservative government” in his opening statement, and focusing instead on what a Labour government would do, rather than what a Conservative government could not, in his closing statement. This resulted in Johnson coming across as the pettier of the two, and proved to be particularly relevant later in the debate, when the two men  somewhat ironically shook hands on agreeing to improve the atmosphere in British politics.

As Johnson proclaimed in his opening statement, for him it was clear that there was “only one reason why we are having this election.” His efforts to focus the debate on Brexit worked well in the first half of the debate where it was the main topic of discussion, but proved awkward and arguably desperate later on as he unsuccessfully attempted to link Brexit to the issue of climate change and, uncharacteristically passing over an opportunity to make a joke at Corbyn’s expense, declared that his Christmas present to Jeremy Corbyn would simply be a copy of his “brilliant Brexit deal.”  As host, Julie Etchingham missed no such opportunities, mocking both leaders on several occasions, first questioning if Johnson had dug himself a new ditch, and later quipping that Corbyn had clearly found more than one “money-tree” if he was going to be able to fully implement his policies. Johnson chose to emphasise the fact that his Conservative party were now wholly united under his Brexit deal, with all of the Conservative candidates for the election backing his plan, and successfully compared this to Labour’s divided shadow cabinet, most of whom are against Brexit and therefore, if they did manage to procure a new deal and hold a referendum on it, would bizarrely have to campaign against their own work. The issue of which side he would take in a second referendum proved to be Corbyn’s biggest weakness, as he repeatedly dodged the question even when directly accused of doing so by both Etchingham and Johnson himself, in what was a clear and largely awkward attempt to win votes from both Leave and Remain voters. Though not present to defend herself, Sturgeon featured prominently in the debate, with Johnson accusing Corbyn of having already agreed a coalition deal with the SNP in order to seize power, the price of which would be a second referendum on Scottish independence. Despite Corbyn denying this claim, Johnson then went on to emphasise the ridicule of holding two referendums in one year (the other of which would be a People’s Vote), a point which most likely failed to resound with most voters given that Johnson himself is responsible for the third general election in just over four years.

The NHS was to Corbyn what Brexit was to Johnson: his main focus and unique selling point. Bringing out a fully redacted document, originally detailing early trade meetings between the UK and the US, which supposedly proved that Johnson was willing to “sell our NHS” in order to agree  a trade deal, Corbyn appeared desperate to switch the topic of discussion. However, later on when the debate did indeed move on to the subject of the NHS, Corbyn certainly came off as the stronger of the two, as Johnson’s claims that the NHS could only be sufficiently funded after the completion of Brexit had provided a stronger economy were puzzling given that a recent study found his deal will leave the UK £70 billion poorer than if it had remained in the EU.

When discussing the issue of trust and personal integrity, both leaders elicited sarcastic laughter from the audience, demonstrating in itself the level of belief many voters have in the two politicians. Johnson professed that voters should look at what he had promised to do and what he had delivered if they were unsure whether to trust him or not, a slightly ridiculous point given that, as Etchingham pointed out, he had promised 40 times on record that the UK would leave the EU on October 31st. Corbyn, when pressed on the issue of anti-semitism in the Labour party, described it as an “absolute evil and scourge within our society,” which was a similarly farcical claim given his inability to wipe it out of the Labour party. Shortly after these declarations, in perhaps his most perplexing statement of the entire debate, Johnson, when quizzed on the monarchy, replied that the institution was “beyond reproach,” despite the recent scandal involving Prince Andrew and Jeffrey Epstein, later qualifying this by stating that the “law must take its course.”

Overall, the debate highlighted both the strengths and weaknesses of each candidate. Johnson appeared focused on getting Brexit done and breaking the deadlock in Parliament, a position which will appeal to Leave voters and those tired of Brexit’s dominance in British politics, but one which also risks alienating voters who feel passionately about other issues such as climate change and the NHS. On the other hand, Corbyn will appeal to those who want a second referendum (largely Remain voters, though they may find the more radical position of the Liberal Democrats to revoke Article 50 entirely a more attractive option) and voters who are passionate about the NHS, but his refusal to declare his position on a second referendum will certainly do more damage than good. 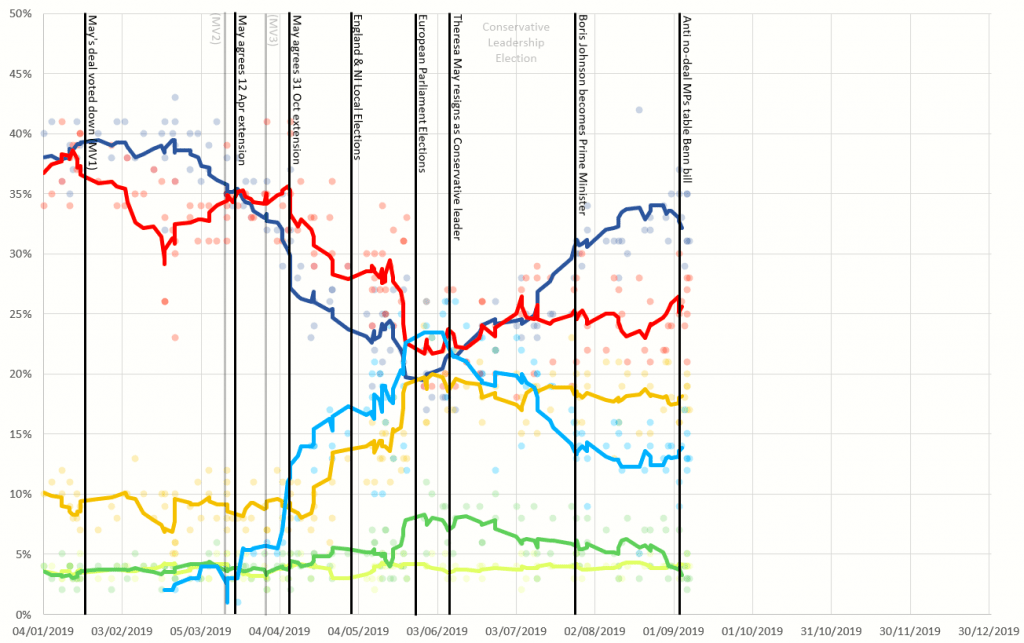