Reflections on the Conservative Party Conference – Is David Cameron in trouble? 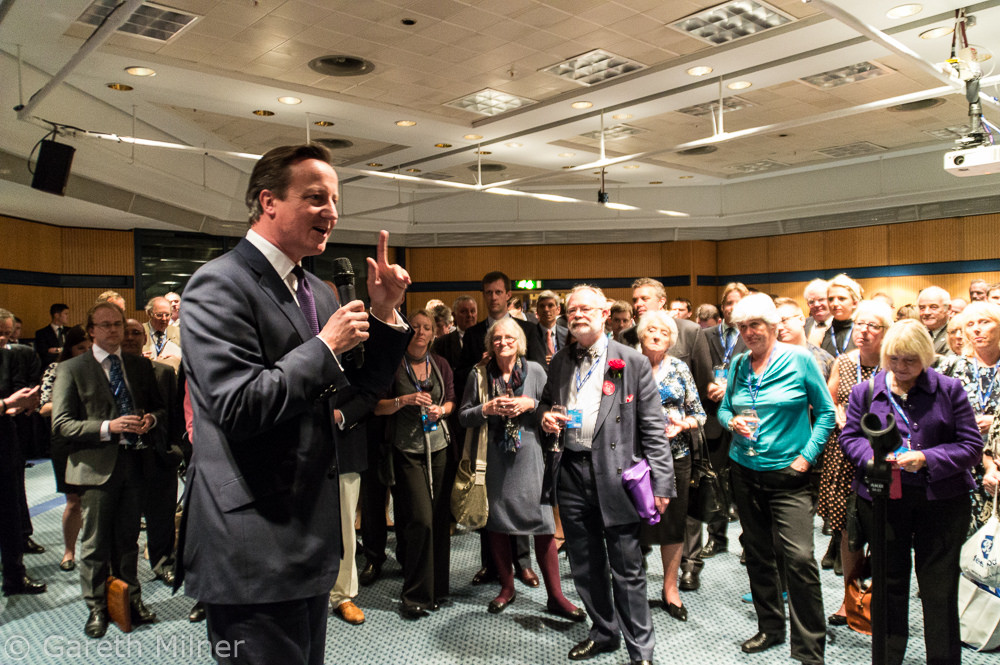 Is David Cameron losing control of his party?

Conference season has come around again in British politics and we get to see what will be promised going into the 2015 general election. It is a good time to present policy and rally the grass-roots campaigners of your political party, as long as your conference went well. I am going to look at the Conservative Party conference and talk about the implications of the conference itself as well as the potential consequences for the current Prime Minister, David Cameron.

The Conservative Party Conference this year was held in Birmingham. Quite a neutral location considering that at last year’s conference in Manchester, the Conservatives were greeted by protestors from various groups ranging from students to charity organisations.

Unfortunately for David Cameron, the party conference this year was hindered by defections to the United Kingdom Independence Party (UKIP). Douglas Carswell and Mark Reckless have both defected to UKIP, which has sparked by-elections in their respective constituencies and put the Conservatives on the back foot. It looks as if the Tories won’t be able to hold onto Carswell’s constituency and that will lead to UKIP having their first MP in the House of Commons. Rather than being heckled by various groups for being too right-wing, it appears Cameron is now being heckled from the inside for not being right-wing enough on issues such as immigration and the EU.

People have slammed Labour Party factionalism for getting in the way of progress in the past, but it is clear that David Cameron doesn’t know how to control his party and is caught at a crossroads between the left and the right of his party. When Cameron became leader of the Conservative Party, he came up with the slogan “Compassionate Conservatism”. This was Cameron’s way of attempting to appeal to the middle ground who could potentially win them the election in 2010, but the electorate didn’t take the bait.

Now Cameron has been left with a difficult decision, but, by analysing policies that came out of the conference, it appears he has made a decision. David Cameron is taking the Tories back towards the right of British politics. It is not just the decision to go further right, but it is the speed at which policies will change if they win the 2015 general election that is worrying.

Tax cuts have been promised. To be precise, Cameron has promised to raise the tax threshold from £10,000 to £12,500 and increase the threshold on the 40p tax rate from £41,900 to £50,000 by the end of the next parliament. On paper, raising the tax threshold looks a good idea and tax cuts are always popular, but when you dig deeper, it shows a bleak picture for the future of public services in the UK. Raising the 40p threshold is estimated to cost around £7 billion and who will pay for this £7 billion hole in the budget? It won’t be the Conservative Party, it will be the general public as front line services continue to get slashed away under the guise of a tax cut for the squeezed middle.

Austerity always hits the poorest in society hardest because of what gets cut. The NHS budget gets cut, funding for schools gets cut, and the police force gets weakened. These things are prioritised by the lowest earners in society, because the private option is too expensive for them to utilise. It seems, though, that Iain Duncan-Smith doesn’t just want to hit the worst-off with benefit cuts, but he always wants to smash the self-esteem of those on welfare provision as well. The idea of prepaid benefits cards is one that has come from the conference. One of the main issues the public has with people on benefits is that they can spend the money on alcohol or cigarettes as opposed to spending it on putting food on the table or paying for bills. This won’t stop that problem however. Addiction shouldn’t be stigmatised the way it is, especially when statistics would show that the “scrounger” culture that Iain Duncan-Smith seems so focused on is quite an insignificant proportion of those on welfare provision. Stigmatising those on benefits by forcing them to use a prepaid card will not fix problems with the welfare system. All it will do is highlight those people who are on benefits and create a culture of segregation which we have worked so hard to escape from over the past century.

By going towards the right in an attempt to rein in potential UKIP defectors, David Cameron has left wide open an opportunity for people to host leadership bids in case the 2015 general election doesn’t go in favour of the Conservatives. Theresa May was one of the first to put out her leadership bid as she was welcomed by standing ovations. I find it hard to understand why she received applause for promising to scrap the Human Rights Act (HRA). The HRA enabled UK legislation to become closer to the European Convention of Human Rights (ECHR). The ECHR aims to create universal legislation that protects citizens of European states from criminals as well as their own government should a government become too powerful. Promising to scrap the HRA only rolls back progress that has been made since 1998. By appealing to the right though, Theresa May came off well and appears to be a potential replacement for David Cameron in 2015. The confidence that May showed to give a speech on home affairs promising to scrap the HRA, as well as strengthen the ability to monitor communication details, shows that May revels in the right-wing limelight and that is something that David Cameron has never been able to do since he became leader in 2005.