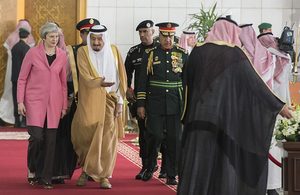 Prime Minister Theresa May conducts a visit to the Kingdom of Saudi Arabia to strengthen ties between the two countries in April 2017.

Ideology informs almost every aspect of one’s politics, whether it is views on economic policy, education or welfare. However, one area seems more resistant to the specific dictates of ideology and more prone to being an extension of general principles and values, that area being foreign policy. As such, foreign policy often fails to honour and reflect the particular ideology and principles of a state, relegating it to being an inconsistent and opportunistic realm of a polity.

Contemporary foreign policy at times feels like a tightrope walk. In an age where state sovereignty is considered paramount and the principle of non-intervention is an ever-more-accepted international norm, political values can be difficult to maintain on the global stage.

The United Kingdom, much like many ‘Western’ countries, has attempted to balance its generally liberal domestic politics with a foreign policy that remains true to liberal values, but not in contradiction to the importance of state sovereignty. This presents difficulties as a liberal ideology is predicated on a notion of universalism; all people deserving the same rights and liberties across the globe.

Due to this universalism and solidarism, challenges arise. How does a state which believes in liberty and freedom for all conduct itself in an international area which is inhabited by states that deny basic human rights, break international laws and do not conform to conventional norms? Can a state be justified in intervening in another state’s affairs, even to the extent of a military intervention, in the name of the liberal values that are believed to be universal?

It appears as though the ability to enforce ideological norms in the international system is only acceptable if such norms are corrupted in a military fashion. In August 1990, Saddam Hussein invaded and annexed Kuwait, unlawfully violating their sovereignty and committing acts of aggression in the form of active warfare. Appropriately, a United-Nations coalition of forces, led by the United State of America, intervened and pushed Hussein’s forces out of Kuwait, executing a manifestation of the liberal values upon which foreign policy should be built on. This international intervention made in the name of state sovereignty and against illegal aggression was lauded as international responsibility taking full effect.

But where does this responsibly to act upon the liberal values and ideology stop? Does it stop purely once the threat of military conflict is quelled, or does it extend to the social, judicial and cultural contradictions to the universality of liberal values?

As Human Rights Watch’s World Report of 2017 details, Saudi Arabia is a frequent and flagrant abuser of the human rights, social norms and judicial integrity that ‘Western’ states espouse adoration for. A notable recent manifestation of this was when the prominent activist Waleed Abu al-Khair was sentenced to 15 years in prison in 2014 due to his peaceful criticism in media interviews and on social media about human rights abuses. Similarly the following year, the blogger Raif Badawi entered the fourth year of his 10-year sentence for criticising the government. This extreme disregard for freedom of expression and abuse of a state’s judiciary is in stark contradiction to fundamental ideological values that many states and international organisations seek to promote, however, little is done about it.

Furthermore, in Sudan, it has been reported that in 2016, government forces ‘killed civilians, raped women and girls, and destroyed hundreds of villages’ which has resulted in up to 190,000 people being displaced. Issues are compounded by the government barring humanitarian aid organisations from entering the country. Again little is being done by the international community to quash the violent and barbaric practices that are being perpetrated by the Sudanese government, practices that are antithetical to the ideals and actions that we believe to be most salient.

At what point does ideology stop being a guiding force for our political proclivities and start to become a mere afterthought in the face of practices such an ideology would never allow?

This is not a call for international intervention in states’ affairs, military or otherwise, when the values that we seek to promote and sustain are not only ignored, but actively degraded. However, as an international community, we have a responsibility. In order to stay true to the ideology that governs us and to the principles that enhance individual liberty, economic growth and societal freedom, states must do more.

This can take form in a variety of ways: pressure through international organisations, unilateral sanctions, and diplomatic coercion. There are ways in which a states can attempt to promote its values within the international system in an attempt to strive for a more open, free and prosperous international community. These attempts must be made if we want to be able to say with conviction that we have stayed true and loyal to the principles and ideologies that govern us at home, by promoting them abroad.