Help! The government is selling my student loan! 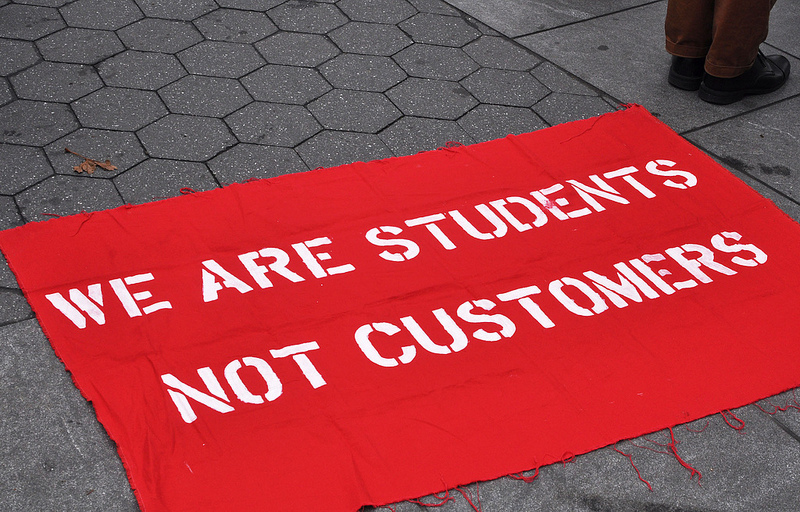 Should higher education be treated as a business?

Monday the 3rd of February marks the start of the official week of action against the privatisation of student debt. Protests on university campuses all around the country will take place, including one in Durham, organised by DUSAA (Durham University Students Against Austerity). Despite this, there is still some confusion about what this means for ordinary students like you and me, and the future of higher education in our country.

In November last year, the coalition announced the immediate privatisation of student debt from between 1990 and 1998. This sale will cover £900m worth of debt on loans (sold for £160m, less than one fifth of its value) and the government plans to sell the remaining student loans of those students who began studying from 1998 onwards.

As for the effect on your purse, you could end up paying more and have the conditions for your repayment changed. Following criticism, the government has assured us that it has no plans to raise the repayment rates but this is absolutely no guarantee that this will not happen one day under a future government. Clearly, companies can only make profit from student debt if the cap for repayments in raised, which would retroactively increase your student debt. And as Michael Chessum has written “the history of higher education funding in the past two decades is littered with broken promises from every major party – from top-up fees to the Browne Review.”

Quite apart from the ethics of these policies, students have enough to worry about with finding jobs and getting on the property ladder at the moment without being harassed and chased by profit-hungry businesses.

Here in the UK we have a proud history of universities as a public service, and we must not let this be eroded. We are moving backwards – university is getting more elitist, less accessible and leaving students with vast debts on their shoulders. Studies already show (and common sense can tell you) that students from working-class backgrounds are deterred from higher education by the size of the debt they will incur.

This is perhaps hardly surprising considering that the working class is not represented at all in the cabinet. More than half of the current cabinet attended private schools, including such prestigious institutions as Eton and Westminster School, in stark contrast to the national average of fewer than 20% of 13–18 year olds. Moreover, the cabinet boasts a plethora of millionaires, again at a proportion far higher than the national average. Philip Hammond, Secretary of State for Defence, has a personal fortune of £7.5m; George Osbourne, the Chancellor of the Exchequer, can boast wealth exceeding £4.6m, whilst our Prime Minister, David Cameron, has a fortune of around £4m. These same ministers who presided over cutting taxes for the most wealthy members of society are keen to point out that we’re all in this together – a sound-bite which seems to ring increasingly hollow. Do we want to regress towards a society of universities dominated by the people who can afford it, whilst promising but poorer students are left to fall by the wayside?

We need to defend the 20th century progress in educational opportunity and stop education in England and Wales turning into a “multi-tiered university system competing with itself for who can attract the most lucrative students and gain the most research funding” as The Guardian’s Michael Chessum puts it. We want an accessible university system which enhances and educates our youth and enriches society, and says no to an unaccountable corporate-style system which doesn’t put students at its heart.

Of course, this is not the first assault on higher education, but rather just one part of the wider attack undertaken by the coalition government in recent years. Many students will remember the protests that took place following the increase in the cap placed on tuition fees from £3,000 to £9,000 announced in 2010. This measure, combined with cuts to the Educational Maintenance Allowance (EMA) brought thousands of current and potential students out onto the streets in waves of protest around the country in the largest student-led protests since 1998. This may be the greatest threat higher education has faced since.

These demonstrations proved somewhat unsuccessful, prompting a much-ridiculed, apology-laden video from Lib Dem leader Nick Clegg, but no U-turn in policy. There is, however, reason to be optimistic this time around. Already, 50 MPs have come out publicly against the government’s plans to sell off the student loan book to the private sector. The organization spearheading the campaign is the Student Assembly Against Austerity which is adding new MPs and supporters every day. Enough political pressure will get the government to abandon this disastrous plan and students all over the country are mobilising to show their opposition to this irresponsible appalling sell-off.

To see what’s going on in Durham and to take part, join the Facebook event at https://www.facebook.com/events/237473933084637/, or you can lobby your MP by following the link below: http://www.thestudentassembly.org.uk/lobbying-tools.html